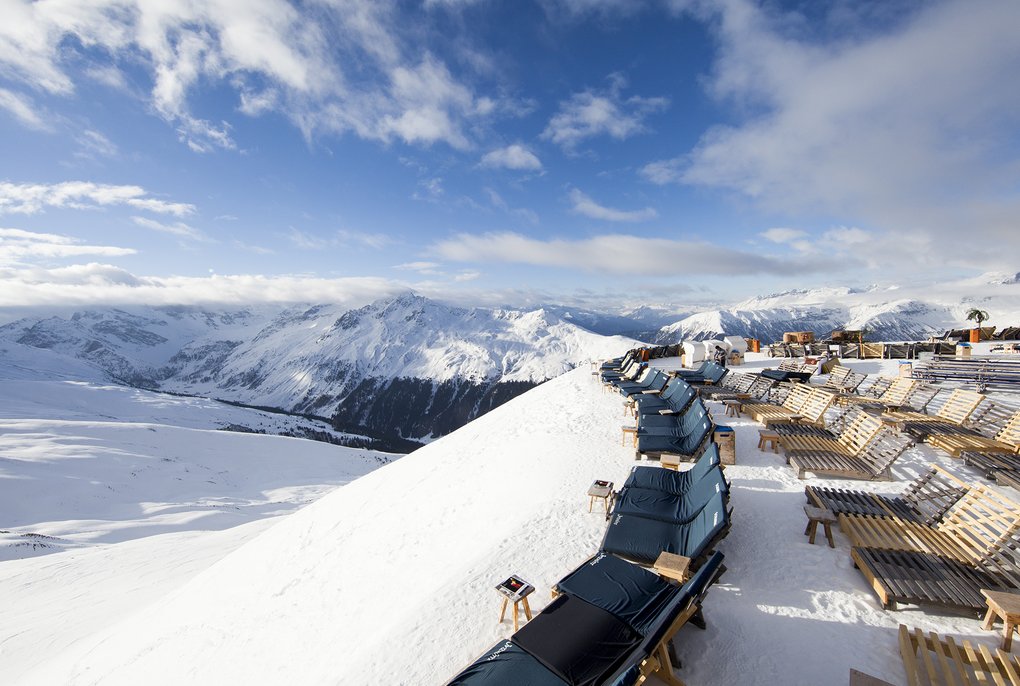 Every culture has its distinct times of the day that everyone seems to know and agree on. In Spain, lunch starts at 2 pm, followed by a siesta. For many Swiss people, the news broadcast at 7.30 pm is a daily must-see. And in Davos, there is one more very famous time of the day: 2.33 pm. That’s when the legendary après-ski parties in the Jatzhütte mountain restaurant on the Jakobshorn mountain start every afternoon. “My son Daniel, who is our Dj, always wanted to start earlier, but I didn’t want to interfere with our guests’ lunch break,” manager Kurt "Kudi" Bachmann tells us. “That’s why I always said: ‘not before half past two!’ So somehow, 2.33 pm became our established time.” And those who go there after 2.33 pm know exactly what to expect. For locals and guests alike, the Jatzhütte is so much more than your usual mountain restaurant; it has become an institution: “Our guests come here to party, everybody is dancing and having a great time,” says co-founder and co-manager Wisi Näf.

When Kurt "Kudi" Bachmann and Wisi Näf opened the Jatzhütte in 1988, they seemed to be a bit ahead of their time: “We were actually the first to play music in a mountain restaurant. Everyone in the valley was talking about us,” Bachmann recalls. “The Jatzhütte has always been a unique place.” “Kudi” and his team kept surprising their guests with new ideas all the time, from special drinks like the “Kafi Sex” to electronic music parties, to more sophisticated events like the “Comedy Gourmet Night”. The biggest change, however, followed in the summer of 2015, when the old building was torn down and replaced by a new one. The new restaurant now boasts a modern power system and a full-blown kitchen. After all, a really good party at 2560 metres above sea level also requires really good service. Plus: palm trees, whirlpools and, of course, après-ski music.

Though the Jatzhütte has become one of Europe’s most favourite mountain restaurants, it has remained a real family business. The core team includes "Kudi", the father of the family and the restaurant’s manager, his wife Barbara as well as his sons Daniel (the DJ) and Calvin and Luca (both working behind the bar). And, of course, there is co-founder Wisi Näf, who has been the “chief of the grill” from day one. “By now, we even have the children and grand children of our very first guests come here. That really shows how long we have been doing this,” Näf tells us.

However, the parties in the Jatzhütte don’t have much to do with the typical après-ski action in other ski huts. The term “après-ski” was originally coined in Chamonix to refer to a little soiree of friends after a long, cold day of skiing, usually including good wine. Today, the term is used mainly to speak of a certain type of music with easy melodies and even easier lyrics and people in ski wear singing and dancing on tables. Those sort of parties can hardly be compared to any other event, as bar tender Calvin Bachmann knows: “Après-ski really is one of a kind. It brings together people from all social levels. No matter if they are workers, bankers or lawyers – everyone is partying together. And since everyone is wearing their ski gear, you really can’t tell who’s who. The goal is for all of them to enjoy themselves and have a great time.” And that’s definitely the case in the Jatzhütte, every day, from 2.33 pm.