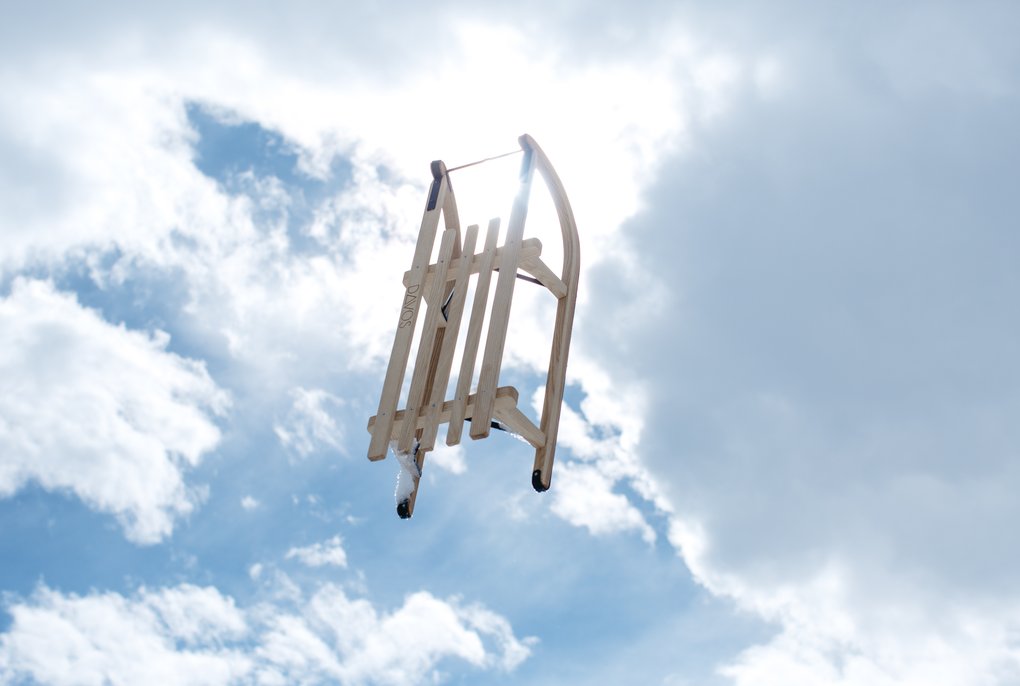 Fresh wood shavings smell fantastic. Paul Ardüser would certainly agree. After all, the Davos-based carpenter has been enjoying the smell of fresh wood for more than 20 years, working in the carpentry he took over from his father, who had once taken it over from his father. Paul’s latest project: the production of the traditional Davos sledge in its hometown of Davos  – which he initiated with the help of his crowdfunding project.

Paul Ardüser is sitting at his desk in a small office right next to the workshop where he keeps tweaking and refining his “new” version of the famous Davos sledge together with his team. In between some documents, a keyboard and a coffee mug on the desk are two miniature versions of the sledge, tempting us to touch them, hold them and study every single part. Paul Ardüser is excited to start producing the traditional sledge again in its native Davos – by hand, of course. The idea was born after he had been asked to build a Davos sledge six times the size of the original for the town’s 150th anniversary of winter tourism (“150 Jahre Wintertourismus Davos”). The huge sledge turned out to be a big success, and Paul Ardüser thought: “Why not start building Davos sledges ourselves?” Over the past decades, the famous sledge has been produced everywhere in the world, except Davos, its place of origin. For Paul Ardüser it was about time to bring it back home. In cooperation with the Davos Tourism Office, he realised his idea via a successful crowdfunding campaign.

A revival through contemporary means

“The Davos sledge is one of the first of its kind. It is made solely from solid ash wood, a very tough and elastic wood, and we offer a life-long warranty,” Paul Ardüser, the “sledge builder with passion”, as he calls himself on the crowdfunding platform 100-days.net, tells us. The runners are made by local locksmiths. Everything is done according to old plans – well, almost everything, that is: “We don’t reinvent anything, but we do try to improve certain parts and do some things differently.” His team is highly motivated, he tells us, especially since their first, quick and unexpected success: “This project has developed its own dynamics and I didn’t expect that at all. We reached our goal of raising 13.000 Swiss francs within only 10 days.”

When the campaign was completed after 100 days, they had raised 39,670 francs – enough money to build more than 50 sledges. Paul Ardüser and his team have been supported by friends and the media. First the regional press wrote about the project, then the big newspapers, and when he was finally invited to the Swiss news programme “Tagesschau” on a Sunday night, Paul Ardüser knew his idea of bringing back the Davos sledge must have really hit a nerve. This positive response was a big motivation for the whole team: “My employees are very enthusiastic – some of them stay here until late to build stencils and test runners, because we really want this sledge to be perfect,” Paul Ardüser proudly tells us. After all, those “Friday-afternoon” projects we work on when our regular work is done, are often those closest to our hearts.

“Wood is a living material“

Paul Ardüser’s family business has been producing hand-made wood products for almost 100 years. They also design, build and repair custom-made furniture, and they “reuse” old furniture to create something new, because a lot of people don’t want to throw away their old pieces. Paul Ardüser tries to make something new out of something old, preserving the soul of the old – a symbolic act of criticism of today’s throw-away society. What fascinates him most about his work: “Wood is a living, creative material. There is hardly anything you can’t make out of wood,” he says. Paul Ardüser was born in Davos, just like his favourite sledge. As a child he did sledge races with his two siblings, he tells us. And sometimes, he took his sledge to pick up his “sweetheart” at the time from school. “Even when I was a boy the sledge was our most traditional toy. It has always been close to my heart,” he says with a smile.

The Davos sledge is more than just a piece of wood people used to go down some slopes in winter. It represents tradition, childhood memories and, maybe, even our first love. It symbolises the rising return to craftsmanship and traditional, local industries and it is an antithesis of our fast-paced society and soulless mass production. At the end of the day, this sledge is a Davos native, just like Paul Ardüser.