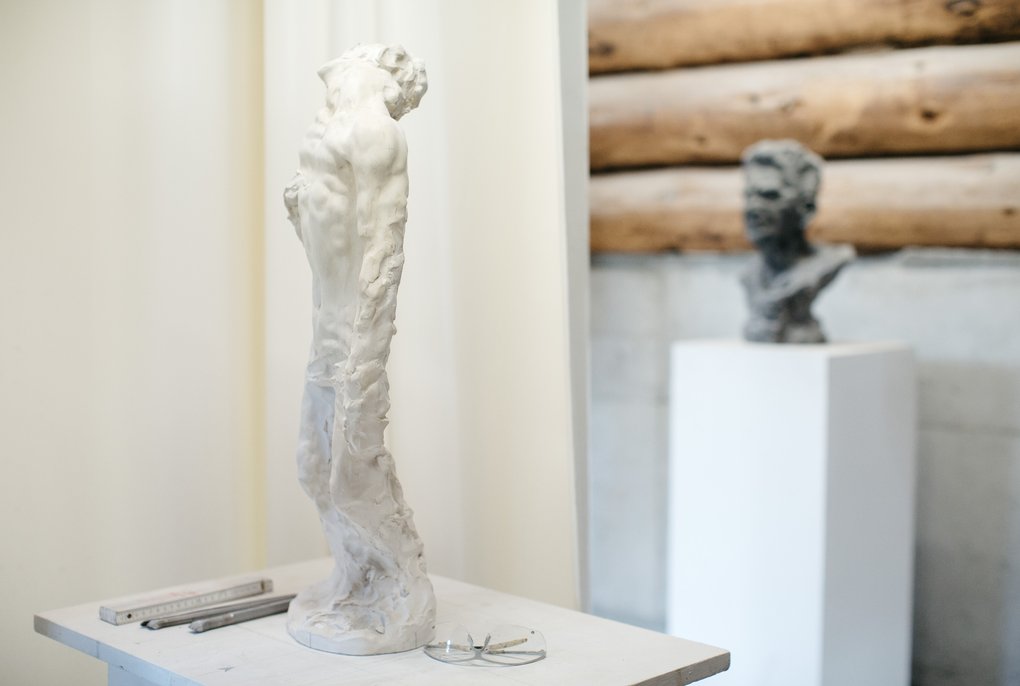 "The experiment is to allow yourself to be looked at by another person," the Swiss painter and sculptor Christian Bolt explains as he studies his current piece, a female bust, in his studio in Klosters. In our conversation he's the one allowing us to look at him amidst sketches, studies for sculptures, wax casts and other things coming into being.

In one of the rooms of his studio, an almost cube-shaped, 200 kilogramme slab of marble is sitting on a wooden table while Christian Bolt works on a sculpture right next to it. He describes the latter as michelangelesque, as an homage to mark the 450th anniversary of the great artist's death. The right upper-hand corner of the marble slab is chipped off. A ritual Bolt performs to symbolise the taming of the object. Now that it is no longer unfamiliar, the encounter can begin. And it will be quite an intense meeting: It will be loud and brutal at once, then tender and loving. Within this thick slab of marble an artwork awaits to be born, or to be extracted, as the artist may say. He believes that every work is an extraction from something greater: an abstraction, albeit a figurative one. It will challenge Bolt until it is finished. Finished – when is that? "I stop as soon as the piece begins working more intensively on me than I'm working on the piece – that's the moment it no longer needs me," says Christian Bolt. Identifying this exact moment has not only been a challenge, but a topic that the artist has dealt with extensively. At one point he titled his works with the date and time of their completion – or the end of his intervention, as he would say.

"Every content has its form and every form has its material"

Marble sculptures were considered an artistic no-go until recently. Since Bolt likes working with marble, he has often been categorized as classic. That comes close to an expulsion from the hyped up world of contemporary art. What might be missed is that Bolt never wanted to be put in any box at all. Working with marble is neither a rebellion against any contemporary dictum, nor is it an attempt to revive classicism. "Every content has its form and every form has its material. The choice of material is a statement in itself. I don't choose marble because it is so white and pretty; I choose it because it's very old clay." If the content, the idea of an artwork calls for an aged material, then that's what the choice will be. In his book "Gegensatz" (Opposite), Bolt writes: "Being contemporary was never my main goal." He describes himself as an existentialist artist who is interested in life, existence, the inner development of human beings. Bolt intensively deals with the human body in his works, which "in the end are all self-portraits; in a way I model myself." But what does he want to achieve with his art?

Being contemporary was never my main goal.

On inner precision and lies

Christian Bolt has a calm and clear voice and his Swiss German is easy to understand. He wears muted colours, inconspicuous glasses, a roll neck jumper. In all his warm friendliness he exudes a certain authority, a loving strictness that he also applies to himself. What he expects from himself as an artist is what he considers the basic prerequisite of any artistic practice. And that's quite a lot. It's something that he had to learn as a young artist. "Fresh out of the academy I had my first studio in Zurich and there was nothing, it was empty. Dealing with myself in the following two years was very hard work." These two years led him to the following conviction: "You can't do anything in sculpture as long as you haven't cleared it up and formed it inside yourself." This 'inner precision', also found in artists like the painter Egon Schiele or the sculptor Alberto Giacometti, is the most important point in the artistic process, according to Bolt. (Bolt, by the way, has been referred to as "the second Giacometti" by insiders.) Inner precision can only be achieved through complete honesty, the artist believes. "I see so many lies in art, so much is fake. So many artists compromise just so they can be part of a certain contemporary genre." If Bolt was a choleric type, he might have screamed that last sentence. Something might have gone to pieces. But Bolt isn't the angry type and even less so the type who does "crazy stuff just to garner attention – that is just over. Our society tries to tell individuals from the outside what the current direction to go is. For me, authenticity is to dare to look inside and to be courageous enough to live by what you find inside." Does the place where one lives play a role?

A horseback rider comes by, but not a single car has gone by in the past hour. We can hear the melting snow dripping from the roofs. Spring is coming to Klosters, which is often named in the same breath as Davos, yet is entirely different. Bolt's father is from Davos. Christian Bolt studied in Italy and returned home in 2003. Now he, his wife, and their three boys live in Klosters, amidst mountains. Mountains that serve as a relief when he needs a break from work. What he loves about Klosters is its tranquillity, its mysteriousness, the old houses, the locals who are a bit rough and gnarly. And what he enjoys the most are the fascinating people that he can exchange views with. In Bolt's opinion, a sort of exchange programme allowing artists to live and work together for a certain period of time could be much more productive than just studying at an academy.

Bolt may not be a very contemporary artist and person. He makes marble sculptures, is a professed Mormon and lives a quaint life with his wife and children in the Swiss Alps – no excess, no drama in sight. He does have an iPhone and considers marketing his art as part of the game. He accepts commissions from wealthy businesspeople in the vicinity. He doesn't hide the fact that Sir Elton John bought two of his sculptures in 2010. He also likes putting himself under pressure by working with quick-drying materials like plaster.  Christian Bolt seems to unite opposites, even though he would never identify any in himself. His motto is borrowed from Heraclitus: "Pantha rhei – everything flows." Can there even be any opposition if everything flows? Maybe it is this field of tension between conservatism and modernity that Bolt moves in, this refusal to be categorized that draws and holds the interest of those following his work. They continue to ask, as does he, "What's going on with Bolt?"