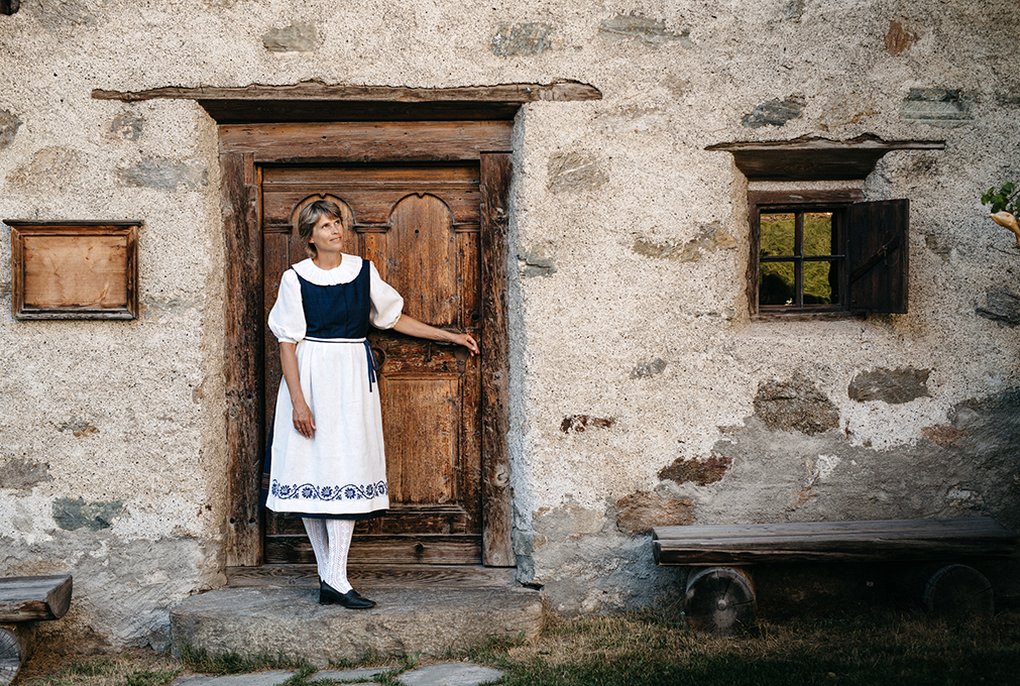 Sunrise. Hans Brosi gets up together with his wife. The 30-year-old Walser washes his face, puts on the same trousers and shirt he wore the day before, takes his leather backpack and sickle and leaves, slamming the door of his wooden house which wakes up four of his six kids. First thing of the day: mowing the lawn. In the meantime, his wife puts their youngest on the wooden potty and prepares breakfast for ten people. The grandparents live in the same house. So he was never lonely, the Walser man.

Barbara Gujan, head of the local history museum in Klosters, which is located in a wooden house from the 16th century, is a petite woman and an extremely friendly person. She speaks the old Walser German dialect, and she knows everything about the old times – about the way trousers were sewn, butter and cheese were made and mice were caught. She knows that the Walser man was a lean and wiry man, that he walked with a slight stoop and didn’t live past the age of 50. And she also knows that the little ones had to sit on that wooden potty until everything was finished, because the Walser man’s wife didn’t have enough time or cloth nappies to do otherwise. After all, she had a few other kids to care for, on top of quite an amount of work in the household as well as in the field. The Walser’s life was not easy, it came with a lot of duties and everything was aimed at just one goal: survival.

On polenta, evil spirits and the so-called “soul hole“

Hans is hungry after a morning of hard work in the field. His wife serves butter-roasted polenta with cheese and a glass of milk to him and their six kids. All the ingredients for this meal were homemade and stored in the cool basement. Hans would love to have coffee, but back then coffee was as rare and exclusive as truffles and white caviar are today. Everyone eats with their own wooden spoon that they simply lick off after lunch and put back into the small wooden drawer on the wall – similar to the way we use our toothbrushes today. It is probably this custom that lead to the German idiom of “handing off one’s spoon” (“den Löffel abgeben”), expressing that someone died and will no longer use their spoon but pass it on to someone else. And if someone in the family died, their soul was set free through the “sould hole”, a little window on the upper floor, letting it rise up past the mountains of Grisons and up to the heavens. Another one of the Walser’s many customs and rituals.

According to Barbara Gujan, the Walser people were very superstitious. Women who seemed a bit different and were said to have supernatural powers were burned as witches. Strange noises at night were interpreted as ominous messages from the world of the dead. On the day of midsummer solstice, when the cattle were herded to the alp, the Walser people ignited a huge fire to scare away evil spirits. Those rituals weren’t simply part of the Walser culture but also a way of dealing with the past, because one of the people’s biggest fears in the 17th century was the recurrence of the Black Death, which had extinguished huge parts of the population in the 1620s. Other diseases, stillborn children and poverty due to bad harvests were also big threats of the time. People were afraid of many things and those rituals helped them allay some of their fears.

The Walser man was a family man

After a hard day of work and a hearty meal in the kitchen, Hans likes to sit down in the Stübli, the family’s main room with a large table and long benches that offer enough room for the whole family. In winter, the chickens are also allowed to stay in the Stübli and lay their eggs in a wooden cage. The baby is lying in the beautifully carved crib while the older kids are playing with their toys: little cows made from painted, polished ankle joints of dead animals. The children are tired from helping their parents out in the field in the afternoon. During summer, they can’t just take their wooden slates and go to school. If they are lucky, they can attend school in winter. In 17th century Grisons people didn’t care for compulsory education. But they did care for help in the fields.

Times of rest were very rare, Barbara Gujan tells us, stroking the leather binding of a bible on a table in the Stübli. Holidays practically didn’t exist, people were glad if they were able to work. The highlight of the week was attending church on Sundays. Walser people were family oriented and lived for the community. It isn’t fully known why they kept changing locations and settled down in different regions, but one reason might have been their fast growing families: women had a child almost every year. Also the fact that Walser people are said to have been greedy and gnarled leaves room for interpretation, because living in extreme poverty certainly requires to be as economical as possible. The Walser people proved that poverty really is the mother of invention: A scythe that was no longer good to be used in the field, for example, was simply turned into a grating device for the kitchen.

Life of a Walser man was hard, no doubt. Recycling was not a question of ideology, but a necessity due to lack of alternatives. However, life was also calm and stress-free. People weren’t always in a rush like nowadays, Barbara Gujan tells us. The Walser man could organize his own working day, his only responsibility was his family. He didn’t perceive his work as a burden, because it was everything he knew and everything anyone around him knew. He was a simple, humble and modest person who didn’t need much to be content. He was very honest and never lonely. Those are all things Barbara Gujan likes about the people who lived back then, and who were probably very different from those living in Klosters today.

At night, just before sunset, Barbara Gujan closes the Nutli Hüschi and gives the past a break. She might stop at one of the windows to enjoy the beautiful mountain panorama that people love so much about Klosters. And maybe, Hans Brosi used to do the same thing, back then, in the 17th century.