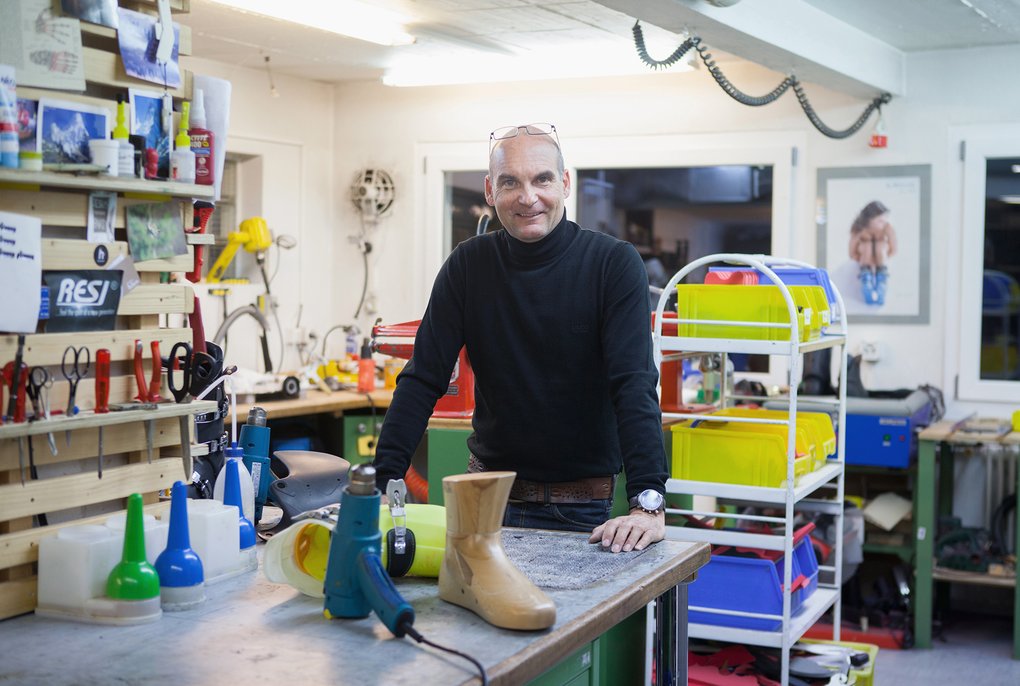 Hans-Martin Heierling’s little shop in Davos Dorf is a cosy place: There’s a radio playing silently in the background, the latest ski boots can be seen up on the shelves next to handmade casual shoes made from old leather ski boots. On the wall there are photos, postcards and thank-you notes from professional athletes who have had their ski boots made here. Customers coming here are invited to take a seat on one of the minimalistic leather fauteuils and, over a cup of tea or coffee, talk with Hans-Martin Heierling about their wishes. They are then led to the next room, the Fitting Centre, where their feet and motions are being measured by means of high-end pressure-plate technology and gravitational laser. And then, a few weeks later, the customised boots are ready to be taken down the slopes. Some of them will even win their owners medals and fame on the way.

Hans-Martin Heierling is the owner of the world’s oldest ski boot manufactory. The fourth-generation owner, to be precise. There was a short break in the third generation when his father sold the business, but Hans-Martin bought it back and reorganised it: “We started from scratch, went back to the roots,” he says. In 2013, he started the production of a unique ski boot, the “H1”. It is made of a special material, Templast, an in-house innovation by Heierling himself: “This boot won’t change whether it has minus 20 or plus 15 degrees Celsius.” Moreover, the H1 has a shock-damping wedge made of Swiss ash wood, making it “a lot more comfortable.” The first 400 pairs of boots were manufactured in cooperation with a local sheltered workshop: “The concept of charity is something close to my heart,” explains Heierling. It took three years to perfect the new ski boot, but already before, Heierling has contributed innovations to the ski boot market. His i-Flex technology for increased flexibility and comfort can be found in many models of other brands.

Heierling loves experimenting, developing new products and innovations. Being an orthopaedic shoemaker, he also wants his shoes to be good for people. Being a business-savvy visionary, he also knows about the demands of tomorrow’s customers: “We offer products that can easily be repaired and remodelled.” And as an inventor he simply loves experimenting with materials: “We were the first to print a ski boot in the 3D printer.” He passionately follows the latest technological developments, loves to talk about artificial intelligence and robotics, and has his thoughts on the future of his branch: “I think in ten years we won’t have any more resources to waste and won’t be producing more useless stuff that’s thrown away after a few months.” The market will change, he says: “It will no longer be producers forcing their products on customers, but rather manufacturers making what customers want.”

„Change is the only constant“

Heierling’s workshop looks as you would imagine a workshop to look like, just little neater perhaps. A 3D prototype of a ski boot in yellow and white looks down from one of the shelves while his fellow H1 boots are being lined with grey fake fur. US ski pro Resi Stiegler is watching, too – there is a poster of her up on the wall. Little seems to have changed around here in the last generation, and it will remain that way apart from a few technical adaptations, says Heierling in his black polo neck. But let’s not forget about his other plans - expanding his network and outsourcing the sales department, for example. He already ships his boots to the top skiing destinations in the US. And then there are the imminent general changes in the industry: “Skiing is becoming more and more of an elitist sport, and pressure in the business will increase even more through global warming. So it’s a tough market, but it also offers opportunities for those willing to take them,” Heierling explains. “We mustn’t turn a blind eye to what’s going on in the world,” he adds, “after all, the only constant is change.”

The happiness that comes from less

Hans-Martin Heierling has proven time and time again that he knows how to handle change. Who would have thought that he would be back in Davos one day, making ski boots? Yes, Heierling was born in the town, grew up in the workshop. But he has also lived in South America for 20 years: “We had this farm in Bolivia, took road trips all over the continent, crossed the Atlantic, spent months on our motorbikes,” he remembers. It is this freedom that nurtures his inventiveness: “You are outside, under the open sky, and then you see a certain movement in an animal and you think, wait, that could be useful in skiing!” Of course, all those years on a different continent have shaped him, made him more open-minded, maybe even humbler: “You return to what really matters, realise that we are actually happier with less baggage. Less truly is more.”

Today, Hans-Martin Heierling loves living back on his old stomping ground (“This really is the place to be – and then there’s beautiful nature, clean air and clean water!”). He has recently bought a traditional, 18th-century farmhouse, complete with an old wood stove that he loves to light. Even though he is so passionate about his job, he places great importance on keeping a good life-work balance. “Others may have their psychiatrists - I prefer two or three quiet days in the mountains,” he says, laughingly. That’s where he recharges his batteries, that’s what keeps him going - towards new ideas for change.