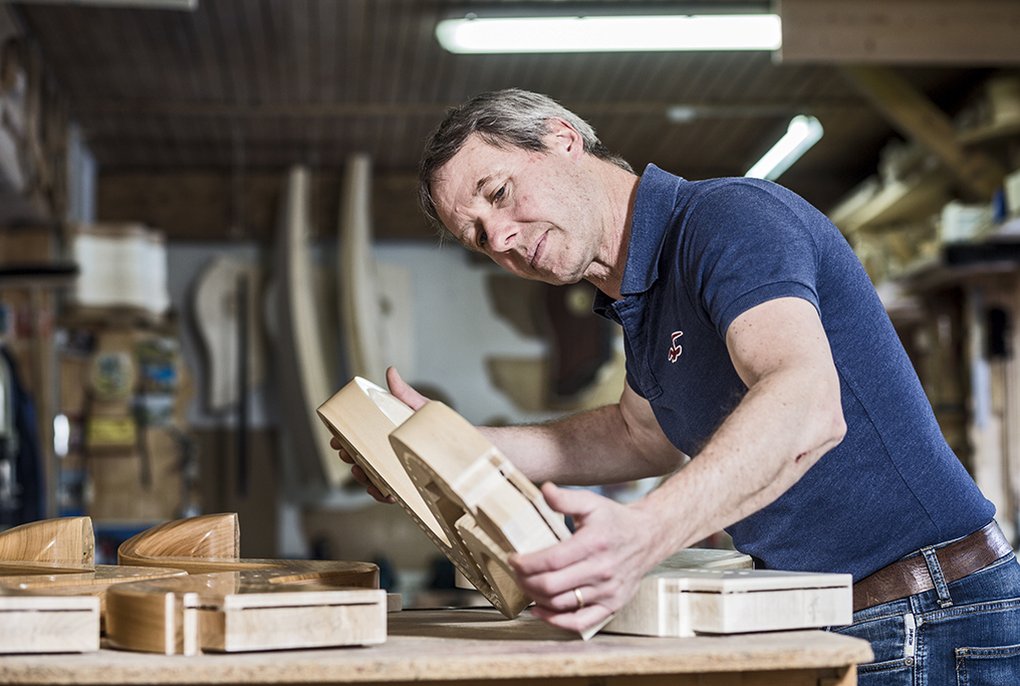 "It is a beautiful, beautiful craft," raves Peter Mürnseer. The harp maker from Kitzbühel is living a life that many others dream of: Instead of struggling to keep up with the exhausting pace of our technologically saturated times, he earns his living with a craft that creates harmony and gives him a sense of serenity.

What's the secret to Peter Mürnseer's idyllic work life? Beyond the sweet sound of his instruments, continuing to make them more perfect is what makes Mürnseer harps so special. The harp maker also has everything it takes to run a successful business: the craftsmanship, a sensitive ear, and an entrepreneurial vision. Spending time outdoors every day helps him keep a cool head and find the right creative and business decisions.

Setting his own tone

"I think feeling content with your work has a positive effect," the harp maker explains in his warm, yet determined voice as he looks into the garden beyond the large window of his cosy studio. Staying calm and confident is key in a niche market like instrument making. After all, only three percent of the population play the harp. But not always going for the easy way seems to run in the family: Peter Mürnseer's father was a violinmaker from Bavaria who bravely changed his craft to harp making when his violin making business faltered in the 1950s. Harps, or more precisely, single action pedal harps with 36 or 40 strings – as they are typically found in Tyrol – have kept the family business running for two generations and nearly 50 years. Orders from customers in Austria, Canada and all over the world keep three employees busy. It takes 90 hours to make a harp – a process that stretches over a total of three months. The average waiting time for one of Mürnseer's masterpieces is ten months. But preparations begin even earlier, five to six years earlier, to be exact. The craftsman shows us the reason as he points to storage shelves at one end of the studio: Here cherry, maple and spruce boards wait to reach their perfect state of dryness.

Where the harp gets its sound

"Wood breathes," explains the harp maker, "it draws moisture from the air and then releases it again." It is important to dry wood until it contains an ideal amount of remaining moisture, which lies around eight percent according to Mürnseer's calculations. If the craftsmen started processing the wood any sooner, the instrument would likely become warped over time. Aside from the natural drying process (without heat) it also takes about five years for all the resin to dissipate. "Only then can the wood vibrate freely and produce a good sound."

Quite an elaborate feat, which is the stark opposite of short-term production cycles we are used to on the modern markets. From an entrepreneurial point of view, planning with foresight is paramount. After many years of experience, Peter Mürnseer has found a good rhythm: He orders as much new wood as he used in the previous year.
While challenges and risks are part of the job, as in any other business, Peter Mürnseer can't imagine living any other life. "Over the years the craft becomes more and more a part of you… It's deeply satisfying to follow the working process step by step. Starting with choosing the wood while it is still a tree in the forest." Every type of wood has its own qualities, its own timbre and tones.

"What makes this job even more rewarding – unlike the equally beautiful craft of carpentry – is that the result produces wonderful music," Peter Mürnseer beams. His harps are all Mürnseer Originals thanks to their inner mechanics, which he builds "following his own ideas and ideals".

In the mountains the day starts early, so that there is enough time for some outdoor action: skiing in winter and climbing or mountain biking in summer. This is one of the main reasons why the craftsman calls Kitzbühel his home. "The gorgeous high valleys you can bike to! Places that are too far away to reach by foot…" Mürnseer believes the reward of getting to Kitzbühel Horn is well worth the physical exertion. "When I'm up on the mountain, enjoying the view, I always feel a deep sense of contentment. Add all the different moods and weather conditions – pure bliss!" he raves in his charming Tyrolean accent. If you listen closely, you might be able to hear the nuances of life here in the sound of a Mürnseer Harp. A strong inner voice is not only good for a person's well-being, it can actually bring your imagination to new heights!