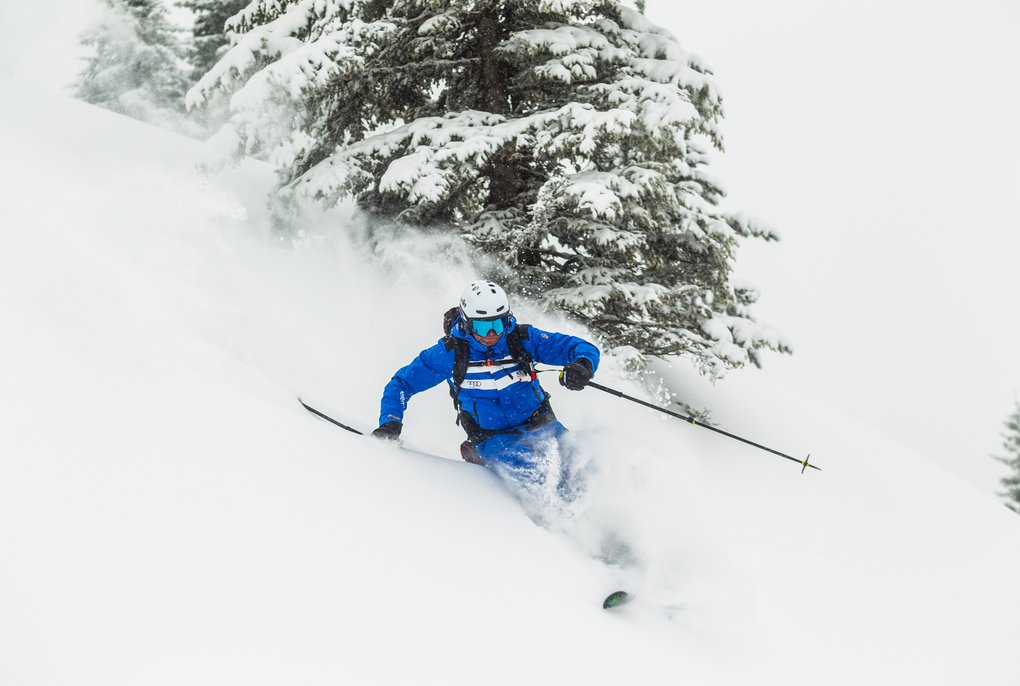 At first everything appears very normal; there is nothing unusual about seeing a skiing instructor in a skiing resort, ski suit, cool walk, tanned skin, ever-present smile and all. That’s how you expect someone who spends most of his time in the mountains to look like, right? The guy who ticks all the boxes of your stereotypical skiing instructor image is Manfred Hofer, head of the skiing department at element3. But don’t you just judge a book by its cover. The 44-year-old definitely is no cliché, and element3 is not your average ski school at all.

We meet Manfred, who was born and raised here in Tyrol, up on Ochsalm, a mountain restaurant above Kitzbühel. The wind drives snowflakes almost horizontally across the slopes and temperatures are below -15 degrees. Still, Manfred takes off his gloves to greet us, a gesture that is natural in most situations, but very nice under these conditions. We exchange a few words and decide take a few turns in the fresh powder first, right through the forest nearby. The few turns turn into many runs, and the few words into long conversations on the chairlift rides in between. But then the cold drives us back inside, to Seidlalm hut.

“We were basically born with skis.”

Growing up in Kitzbühel, amidst the omnipresent mountains, means that “skiing was just the most natural thing to do,” Manfred tells us. The hillside behind his parents’ house became his first downhill slope, they used hazelnut sticks as gates and cross-country skis for ski jumping. “We just tried everything that was possible back then,” he recounts. So it was only natural that he competed in his first races when he was still young, first on skis, then on the snowboard. So far, so normal for a place like this. But then Manfred discovered paragliding, “which was completely new and unknown back then.” Soon, flying from Hahnenkamm became his new passion, and “because none of us wanted to work in the hotel business”, the idea of founding a school for tandem paragliding was born. After all, air was the first element of all. In the following years, canyoning and rafting was added to the list of activities, representing the element of water. And then, finally, earth followed in the form of mountaineering and climbing. And so, element3 was born. At the time, however, there was still no ski school on their minds, Manfred remembers.

But back to Seidlalm. The hut on the Hahnenkamm mountain proves perfectly that tradition and modernity can go together well. The old wood in the historic parlour showcases the work of skilled craftsmen from back in the day and the new, modern interior makes it all light and refreshing. Three young women took charge of the historic hut two years ago. One of them is Isabella Kortschak. She does all the accounting for the Seidlalm and also runs an event and incentive agency down in the valley. The name of the agency? element3. “We founded it in 2004,” Manfred tells as he sips on his espresso, “and then, ten years ago we added the last component, the ski school.” Manfred and his team knew from the beginning that a tourist enterprise like this could only be successful when it had something on offer all-year round. Moreover, having a great support network in Kitzbühel and around is key.

element3 consists of the agency, the ski school and the outdoor sports department, each of which cooperates with several other small independent businesses. Also, they can rely on the support of strong partners like Audi. More than 150 people work for the ski school at times, with some of them being hired for special events only. This is not only economical but also allows for “great flexibility in regard to our clients plans and wishes.” Above it all, delivering high-quality experiences is the top priority at element3 at all times. There are, for example, never more than six children in a skiing lesson – a teacher-student ratio you will hardly find in any other ski school. The “Sicherheit am Berg” (safety in the mountains) project, aimed mainly at children and young people, informs on the dangers of skiing off-piste. “I want to raise these young people’s awareness to the risks and dangers of freeriding in a non-patronising way,” Manfred, who has two children himself, explains.

It has become late afternoon and we finally leave Seidlalm. The snowing has stopped, the last rays of sunshine break through the clouds and we catch a glimpse of the Kaiser Mountains, glowing red in the evening light. We silently enjoy this moment - a smile says more than a thousand words. And so we head back to the forest, to take our last turns for today, through the dry powder back to Kitzbühel.