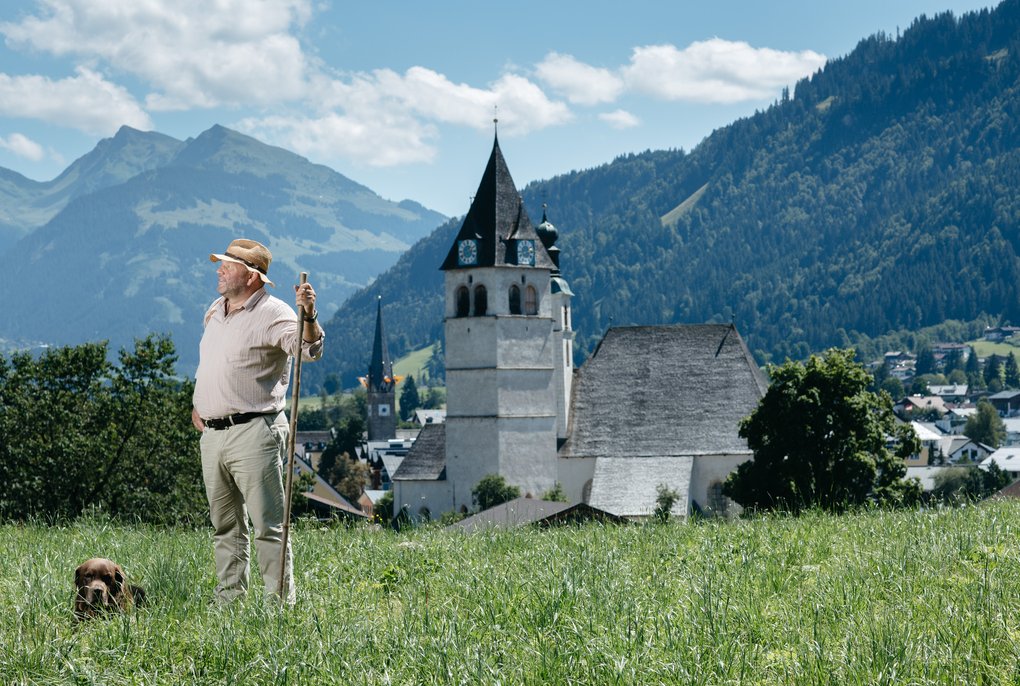 The dog has sore muscles. He was just at the chiropractors and is completely exhausted now, owner Harald Kunstowny tells us. Balu is a laid-back chocolate Labrador, "my partner, a very sensitive dog," he explains. Kunstowny is an expert for feng shui, geomancy – the art of creating environments that empower the harmonious interaction between human spirit and earth energy – and geoculture, which he describes as "an approach investigating how humans today can holistically live in harmony with nature and the earth." In other words, he makes sure that people feel good in the places they spend most of their time the most time, whether it’s at the office, at home, at a hotel, or in the hospital. He also offers power place walks in his hometown of Kitzbühel.

There are quite a few such sites in the area and the experienced traveller, who saw most of the world before he returned home, knows them all. For more than thirty years, Harald has been learning about power places, and for three years he has been working on a book with his colleague Jakob Scala. The book is about sites of spiritual energy in and around Kitzbühel, such as the Pfarrhügel or the Schleier waterfall.

It’s a lovely, warm summer day, not a cloud in the sky, the sun shining on the green meadows of the Pfarrhügel at the northern end of Kitzbühel. There's a lot more going on in winter on the 'Urkulthügel' – the ancient culture hill – as Kunstowny calls it. "Mothers come here with their kids to practice tobogganing and skiing." In ancient times this was a Celtic site of worship, a tell-tale sign that this is indeed a special place. To recognize a power place several methods can be applied, ranging "from radiesthesic analysis (a method that detects radiation and energy above water veins, electromagnetic fields and the like) to the interpretation of unusual growth formations in trees and other plants, to deep perception on site," the expert explains. Having a trained, sensitized sense of awareness is just as important as being open and ready to engage with the place. A slim path leads from Pfarrhügel to the baroque Liebfrauenkirche, where "an intense energy above the altar painting of Mary can flow onto the worshippers, " Kunstowny describes. The church is also home of the 6,000 kilogramme 'Kaiserglocke' bell, said to be the most resonant in all Tyrol.

Beneath the Schleier waterfall

To get to the waterfall from the Köglern farm in Zephirau, we walk through a small patch of forest and then cross two bridges. Right after the second one, which leads over a pretty, gurgling wild stream, the air suddenly changes. A few metres ahead, the waterfall reveals itself in all its glory.  On this day it seems particularly powerful and strong as the water pours straight down the cliff and crashes onto the rocks below with what seems like glee. "The rock behind the fall is layered like aged oak wood floor, but its about half a billion years old. You can feel the stored energy of millennia right here." Harald Kunstowny likes to come here with his geomancy groups for physical exercises that help connect to the place and make it easier to get in touch with its qualities and atmosphere, as he describes it. Balu, quite tired a few moments ago, runs down the hill and eagerly looks around, as if he's soaking in the energy. You don't have to be overly spiritual to feel that natural forces are at work here.

"Kitzbühel has a high level of life energy"

There are several other power places in and around Kitzbühel. Every one of these places has special qualities, sort of like a code. And thus Kitzbühel has its own code as well: "Kitzbühel has a high level of life energy, which makes people successful in their professional lives professionally successful. Celebrities seem to enjoy this type of atmosphere," Kunstowny notes. And Balu, on his back awaiting a belly rub, obviously feels great here, too.