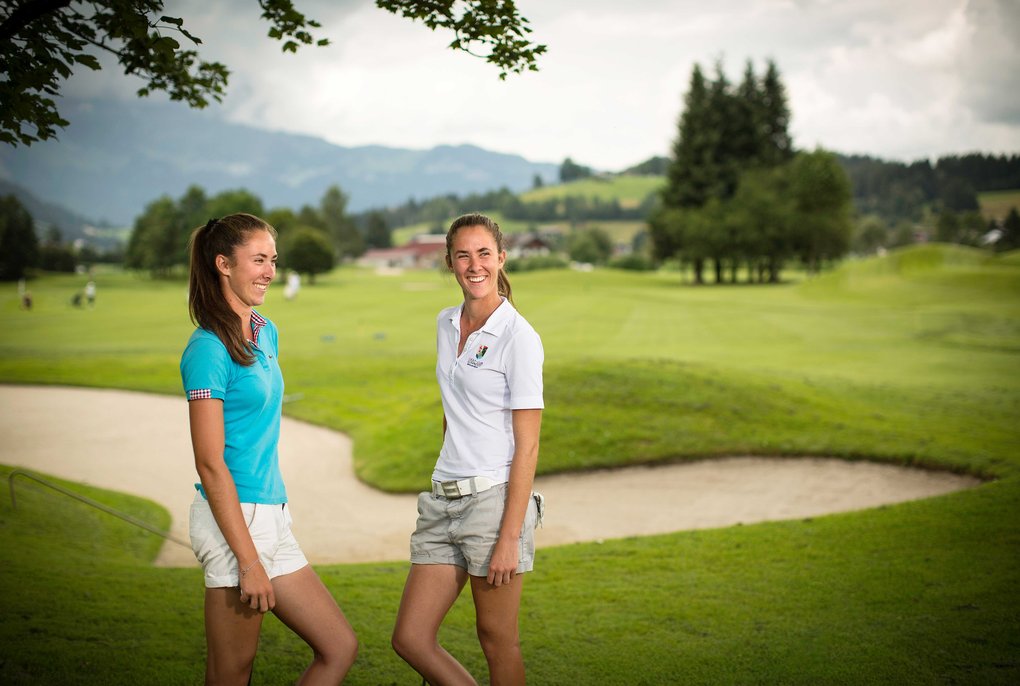 Golf courses aren't really attractive places for children: You mustn't speak loudly; you mustn't bother the players or caddies. No playing catch or hide & seek. Even running across the green is a big no-no. The people you usually meet there have left their childhood days far behind. And yet, Grace and Christina Einberger, twin daughters of pro golfer Duncan Whitaker, have always felt drawn to the green. Today the sisters are 17 1/2 years old and promising members of the Tyrolean junior golf program/squad. They've grown up with golf and if they continue to play, they can expect a bright future in professional golf.

Four years ago, Grace and Christina came to a decision. "First you just play for fun. Then you realize: I'm quite good at this. Why not do it properly? And then you drop all other activities and spend all your time at the golf course," Grace explains. In this case, "do it properly" means three to six hours of training - every single day. In summer on the Kitzbühel-Schwarzsee-Reith course, in winter on an indoor course or at the gym, where they train the muscles they need to perform even better. They practice in bad weather; they practice when all their friends are at the pool; they even practice when they don't feel like practicing. "When one of us isn't in the mood for training, the other says: ‘You'll have to come along anyway, because I'm not going on my own’", explains Christina. Each year they compete in 25-30 tournaments some of which last up to four days. They love the feeling of winning ("It shows you that all the hard work has paid off.") and after setbacks they train even harder ("Sometimes you kind of over-golf, but after a day or two off you get a grip on things and return more motivated than before."). Even though the twins compete at the same tournaments, they don't consider each other competitors. "As long as the victory stays in the family..." They never run from weaknesses; quite to the contrary. They deal with difficulties in a straightforward manner, with lots of discipline - and with lots of joy. Being together is the best part. The girls believe that "many players are very focussed on their trainers." "We always hit the green together and enjoy ourselves," Grace adds.

Golf is affordable for everyone

Discipline, regular practice, fun and a sister by your side who is a best friend and not competition - these factors seem like the perfect recipe for success. And then, of course, there's also their dad Duncan. The native Brit came to Kitzbühel 20 years ago, first teaching at the nine-hole course at Rasmushof, later changing to the eighteen-hole course in Schwarzsee. He never pushed his girls to play golf. "Ambition and motivation have to come from within,” he says. What he taught them was a relaxed approach, to just enjoy the sport. "In Britain, golf is a national sport anyone can afford. If you want to play, you can. In Austria the image of golf as an elitist sport is still prevalent, but this view is consistently changing," Duncan Whitaker explains. In order to encourage young talents, the four golf clubs in Kitzbühel have developed a joint program called KIDSbühel Future Champions: For an annual fee of 100 Euro, children and teenagers can play on all four courses. In addition, they have access to free practice balls, a weekly golf lesson and offers for used golf clubs. When there is a tournament in Vienna or Salzburg, the golf club covers costs for entry fees and accommodation. "The excuse that golf is unaffordable is simply no longer true," insists Duncan Whitaker. The two young sisters are living proof that the old cliché is a thing of the past.

What comes next for Grace and Christina? "Winning the Austrian Junior Golftour," is the sisters' next aim. Continually successful in Tyrol, the twins wish to take their talent to a national level. Another quality they share: no excuses. "When people miss the hole, they'll often say 'The weather's to blame'; or 'You were speaking too loudly'. Of course it's never their own fault," Duncan Whitaker says and laughs. It comes as no surprise that his daughters' attitude is not at all like that. And so the future sure looks bright for these two exceptional young talents.