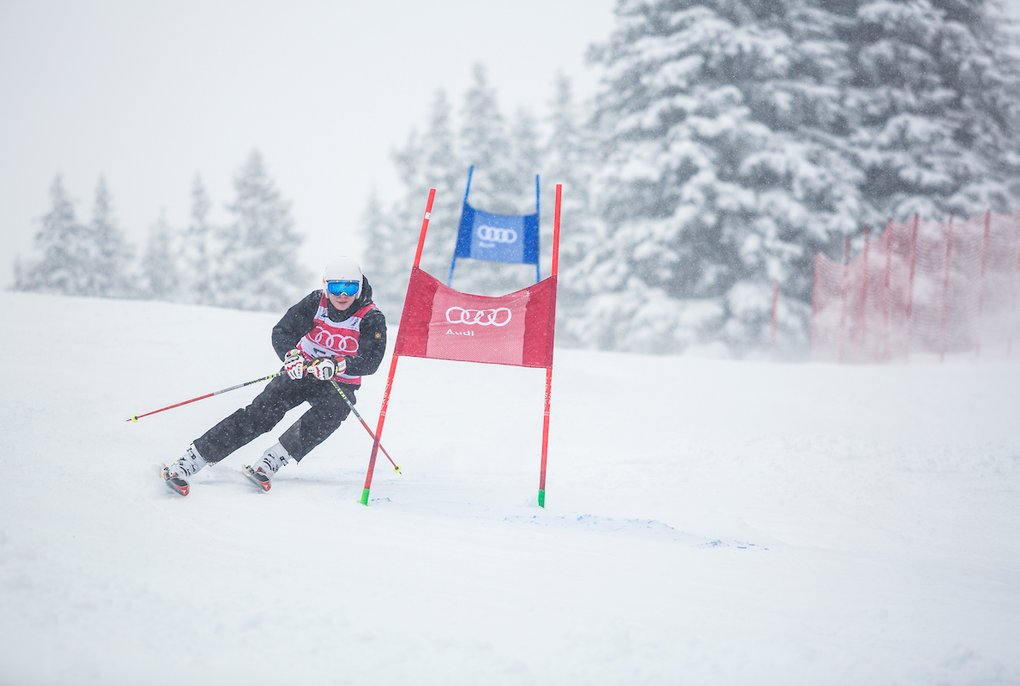 He jumps out of the starting house, ready for a wild ride on icy ground.  Despite poor visibility he masters the first jumps and steep passages. Squatting deeply, he races over the snow, becoming faster and faster. As he approaches the final brow of the hill, he gives it his all one last time. Right before the final jump he reaches maximum speed. He jumps and lands, immediately tucking his ski poles back under his arms. Only a few metres to go. He puts his hand to the front to activate the timing system’s photo cell, crosses the finish line and comes to a halt. He turns his head to the score board: Number One. He raises his arms. The crowds go wild.

It’s every skiing pro’s dream to be up on the top of the podium at least once in their career. The Audi quattro Ski Cup makes this experience accessible to all the others who don’t happen to be ski pros yet want to get a taste of what it means to be a ski racer. Every amateur skier has the opportunity to qualify for the grand finale in Kitzbühel at one of ten tour stops in the Alps. “Of course this is mostly about having fun,” says former ski racer and presenter of today's race, Hans Knauß. And it’s easy to believe him; even after his active time in the World Cup, Knauß' enthusiasm for skiing has not diminished a bit and "that's exactly why I'm here - that's why all these people are here. This simply is a great event.”

Here means Kitzbühel, where the legendary Hahnenkamm men’s downhill run is being held ever since the beginning of the Ski World Cup in 1967. All the greats of this discipline have started here, venturously throwing themselves down the infamous Mausefalle (mousetrap) section of the racing course. Kitzbühel is where the elite of the international winter sports scene mingles, and it is just the right place for a competition where “not everyone comes racing down at 90 mph”, a lawyer from Munich says laughingly as we speak to him in front of the starting house. He has been in the Alpine town all week on a skiing holiday and is looking forward to "finally tackling those gates again".

It is a very diverse crowd of about 50 people, divided into different age groups, who came to the qualifying race next to the Ochsalm hut. By now, the race has started and everyone is in high spirits. Two young women from Vienna warm up over a cup of tea while they wait for their turn. “The final gates are pretty close to each other. We really have to watch out for those,” one says. “I just hope the slope remains in good shape until it’s my turn,” the other one replies. And her concerns are justified; it is snowing heavily from low-hanging clouds and the piste workers have to work hard to clear the track from all the new snow in time for the next racer. A little to the side we see a young man in a dark ski suit, his snowboard under one arm and a digital camera in the other hand. It’s Tom Klocker, a former snowboard pro and one of Austria’s most renowned outdoor photographers. Despite his obvious qualification for this event, he is not here to actively participate in the race. “I came as a photographer and also I am still a snowboarder,” he says with a wink.

The race is now in full swing; the second run has just begun. Just like in an actual World Cup race, the skiers are now starting in reverse order. Every racer gives it their all, trying to make up for the time lost in the first run. One of them, dressed in a strikingly colourful jumpsuit, falls just moments before reaching the finish line. He gets back up again, and instead of yielding to despair, he takes the final turns cheering loudly. After all, falls are as much part of a ski race as are trophies and winners’ podiums. Now the next racer, a pensioner from St. Johann in Tirol, reaches the finish. He takes of his long, narrow skis and, without even looking at his score on the display, raises his arms into the air. “I don’t care what place I came in! I just love to ski!!” he says, a sentiment shared by probably each and everyone around him that day. Everyone – racers, organisers, course marshals – is beaming with joy today.

Olympic champion in ski flying Thomas Morgenstern has just crossed the finish line as the last runner with the best time, just like in the first run. “I guess they’ll exclude me from the rating because of my past in sports," he says with a big grin. You’d think that someone like him, someone who celebrated so many victories in his career, has seen it all, but his eyes have the same enthusiastic sparkle as did those of Hans Knauß, the Munich lawyer at the starting house or the pensioner who didn’t care about winning. This race is not about running against time. It is about sharing the exhilarating joy of racing down a hill on two skis. And then you realise: There don’t have to be winners and losers in every competition to make it fascinating.