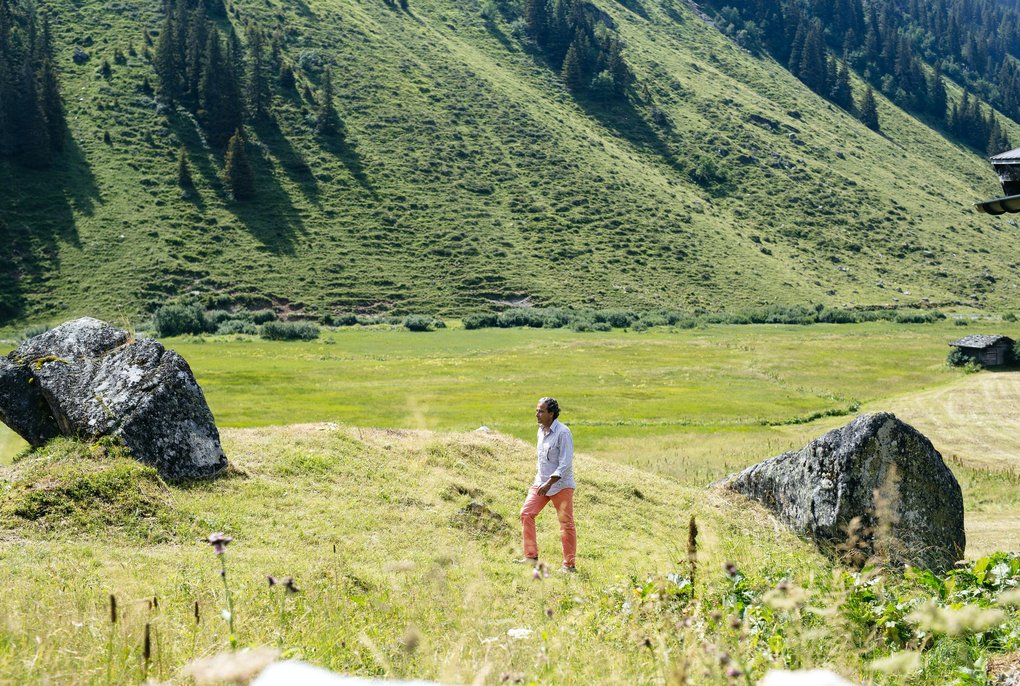 Sun-tanned in a casual shirt and sipping on a glass of homemade ice tea, Rudolf Wötzel sits on the terrace of his Berghaus Gemsli tavern in Klosters. The bracelet around his wrist is a gift of his little daughter. Wötzel is very relaxed on this quiet morning, there’s still time until the first guests arrive. Ten years ago on a day like this, he would have been in his office or a meeting in a bespoke suit, working on M&A deals for Lehman Brothers such as the sale of SWISS to Lufthansa. After a months-long hike across the Alps, he decided to end his very successful career and in 2009, he bought the Gemsli house in Klosters’ Schlappiner valley.

Mister Wötzel, first you lived in a house on prestigious Lake Zurich, now you are an innkeeper in Klosters. Do you miss your old life?

At least not the classic aspects of a luxurious life.

Sometimes, when I see how the careers of former colleagues who remained on the “old highway” have taken off, I have to remind myself that it was me who chose to take the exit and end that kind of career. So I really can’t blame those who are now driving Ferraris while I don’t. And then I realise that I am now cruising along some country road in my Space Wagon, having so much more fun.

Why can’t so many stop before they - sadly sometimes quite literally - drop?

Most people think they will realise when their load is becoming to heavy. But in my experience, being under a lot of pressure is rarely enough for people to make a decision or a radical change. Pressure is a negative force, it drives you away from the good things. What you need is a counter-concept, a clear, concrete idea what you want to do instead. In my case it was my plan to hike across the Alps, from Salzburg to Nice.

Wötzel planned his hike over the course of a year. He took 20 minutes every day to flesh out the project with the code name “Hannibal”. His idea: Sponsors were to give a certain sum for every summit he reached, and in the end, he would double the amount collected. On May 22, 2007, he started in Salzburg and arrived in Nice five months later, having collected 22,000 Swiss Francs for a project supporting the integration of mentally challenged children.

Was it clear to you from the beginning of the hike that you would not return to your old job?

No, initially I only wanted to take some time out. I thought a lot about how everything would be afterwards, and after about half of the route I realised that I didn’t want to go back. And in that moment, the moment I said good-bye to all these thoughts and plans, my mind suddenly became free and open to new things.

Afterwards, you wrote a successful book on your journey, on leaving your job, the hike. Critics say that an endeavour like this is only for those with enough in the bank.

As much as I understand this thought, it is only a defensive argument that is often used as an excuse. I never said anyone could do anything; everyone has to be clear about their own scope and possibilities. And, moreover, height is also height of fall – the higher your living standard, the more you have to let go.

Besides all job-related and financial consequences – what does dropping out of one’s previous life do to friendships and social life?

For my relationship at the time it was too much. And yes, of course, some friendships also did not make it through that time of change. But there were also people who I was sure would turn their back on me, yet the very opposite was the case. Moreover, I got to know people I would never have met in my old life. Even my wife says it would have been hard for me to win her heart as a banker. But there are also friends I would have liked to keep but had to accept that my new lifestyle was just not their cup of tea and that I became uninteresting to them. Speaking from the economist’s point of view, however, I can say that the net effect is clearly positive!

After his hike Wötzel moved to Klosters. Inspired by his experiences at various mountain chalets, he bought Berghaus Gemsli in 2009, promising the previous owner to continue running it as an inn. After doing so for four summers, he now also offers coachings and workshops based on his experiences.

Will all alpine chalets be run by former top managers soon?

My workshops are not about counselling people towards dropping out of their lives. There are many who come here with the thought of chucking it all in, but then together we find out that actually they only have to change a few parameters in their life to be happy with what they are doing again. The most important part is to find out what can be changed and what has to be accepted as given. Unfortunately, we tend towards seeing the former as given although a lot could be done, and to concentrate our thoughts on the latter although nothing can be done about them anyway.

Could you give us a concrete example?

I often ask people to make a list of the ten craziest things they want to do in their lives. Most people go for things that require some fundamental decisions; that way it is easy for them to find arguments against realising these ideas. Together, however, we can break down these big ideas into small, realisable projects.

You coach people here on the foot of the impressive Silvretta mountain range. Most of your clients are from urban areas. How do they react when they get here?

As long as you are in the city you always know: Man has built this place. And then, suddenly, you end up in such an impressive, mighty environment that was definitely not man-made. This shrinks us in our size, so to say, makes us take ourselves less seriously, which is extremely relieving and sets free a lot of energy. Compared to these mountains we’re nothing but little buggers.