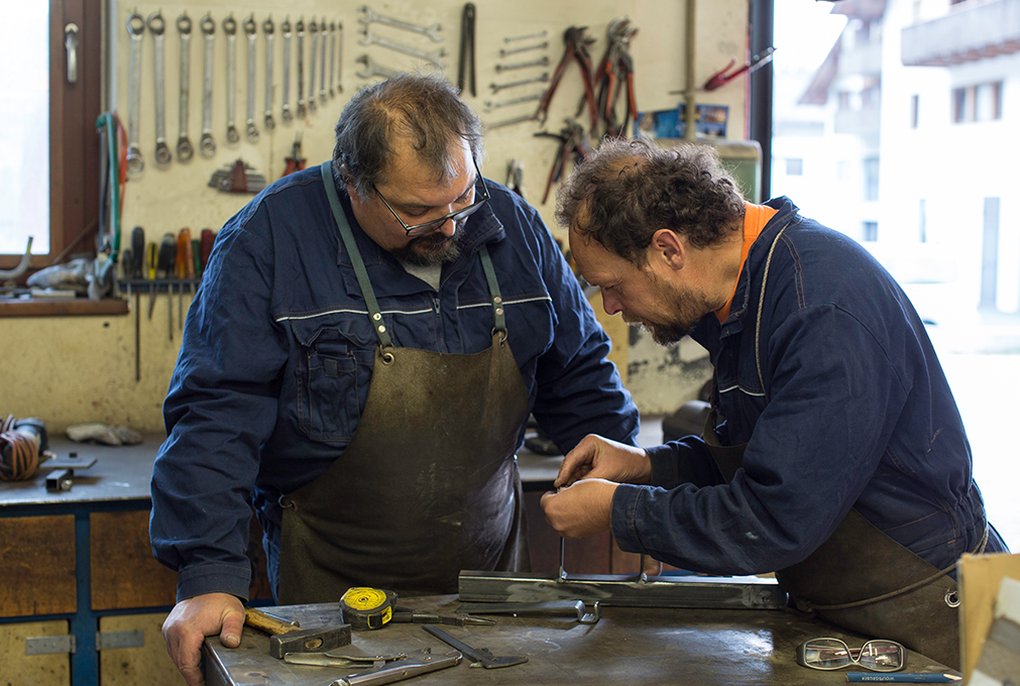 “I hope it will look like I am his teacher!” Diego Menardi tells Florian, our photographer, who is taking pictures of him and his business partner Roberto Chenet as they work in their workshop in Cortina. And then the two blacksmiths share a laugh, something they have been doing for many years. Diego and Roberto have known each other for a long time. Since the 1980s, to be precise. “We worked together for some time already 30 years ago,” Diego recounts, “and then we had jobs in different places for a while, but we never really lost sight of each other.” In 2013, they joined forces again to hammer iron, heat steel, create lily-shaped lamps or forge huge fences. All the things you do as a blacksmith.

Cortina is a small community of a little under 6,000 people, yet besides Diego and Roberto’s place (called “El Fòuro” – “Fire” in the local dialect) there are ten more blacksmith shops in the village. “We have a long standing tradition of craftsmanship in Cortina, with many customers coming from outside the village.” Diego explains. He shows pictures of a gigantic wrought-iron gate that now stands several metres high in front of a villa near Venice. “We copied the original design from the 18th century. It was one of the craziest projects we have ever realised,” he remembers. Another one is the world’s biggest racing bob, a seven-seater that they made for a promotion campaign of car manufacturer Nissan. There is a photo of it hanging in the workshop.

It seems a big stretch from racing bobs to lily lamps. But it isn’t if you know that Diego Menardi worked as a mechanic in bob racing for many years; first for the Canadian, then for the Monegasque team. Ten years he spent in Canada, where he learned the tricks of the trade and perfected his English. “Today we do make a bob from time to time, but that’s not our main field of work. We make everything that can be made from steel,” he says. Is there a signature “El Fòuro” product? “Well, every blacksmith has his own style, differentiating him from his colleagues,” Diego explains, “and I think I am the only one in Cortina making lamps that look like lilies. What can I say? I just happen to love flowers.”

In the workshop’s small office are a few prototypes of the lamps that Diego and Roberto are known for. In the workshop, you can see the whole range of equipment and instruments used for making these lamps: press, forging furnace, hammers, anvil. It is obvious that this job requires a lot of strength – and protective clothing. “Well, it’s a craft like any other. You don’t have to be super strong, actually. You just need to know what you’re doing. And be willing to learn. I have been working in this field for almost 40 years and still there’s something for me to learn every day. I think that’s important. If you think you know it all you miss the chance to grow and improve,” Diego explains his approach. He loves working with iron and steel, watching how they change under the effect of heat. How they can be tamed with fire. How versatile they are. “Just like wood,” he says.

Speaking of wood, Diego comes from a family of carpenters. “Everyone in my family works with wood,” he says, laughing, “but somehow I was more attracted to iron.” Luckily, his family was okay with his decision to become a blacksmith and so he can now do what makes him happy – making customers happy along the way. “I like when a client let’s me do my thing, when he or she says ‘Just do what you think is right.’ And then in the end seeing that they really like my work – that’s the best part of it all.”

It is obvious that Diego really likes to be in his workshop, with Roberto being his partner in crime. Before we leave he shows us one more photo. It’s a close-up of Roberto and him, a piece of smouldering, sparking iron between them. And we can officially confirm: These two are really having fun at work.