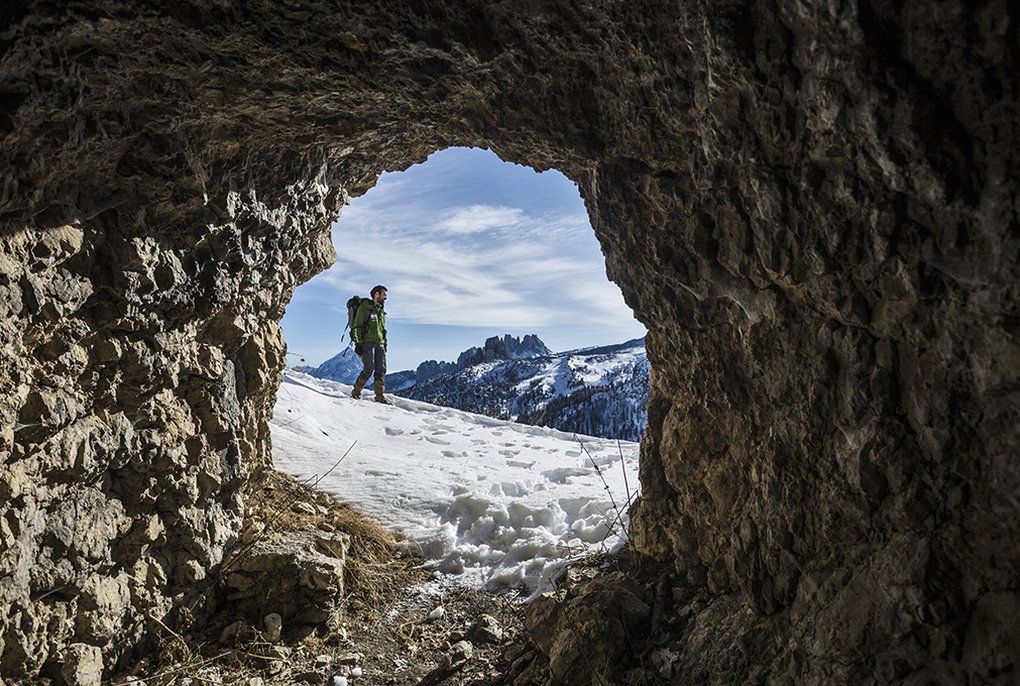 If you would like to go on holiday where you can enjoy and explore nature beyond well-trodden paths, you will find lots of things to do in Cortina D'Ampezzo. One of the most beautiful and spectacular places to visit is the Natural Park of the Ampezzo Dolomites. The area of more than 27, 000 acres with more than 300 kilometres of hiking trails, eight climbing routes, eleven cabins and numerous mountain lakes stretches from Cortina D'Ampezzo to the South Tyrolean border. It is home to breathtaking mountain groups and mountains such as the Trofane, the Fanes Group, the Col Becchei and Monte Cristallo. The entire region, declared an UNESCO World Heritage Site in 2009, is lovingly managed and taken care of by the Regole D'Ampezzo (see info box): "We mark the trails and make sure they are kept clean. We organize hikes with kids and teach them about native plants and animals. We also ensure certain rules are followed," park ranger and regoliere Manuel Constantini explains. Already his ancestors looked after the land hundreds of years ago. The rules he talks about include preventing littering and wild camping and making sure no one is too noisy, takes plants, or lets their dog off the leash. In short: keeping everything in the untouched state it has been in for centuries.

This, in turn, helps stressed visitors wind down. What else will they discover here?

The sound of silence

Only a few hundred metres into one of the soft trails you will realize that your own breath is the only sound you can hear. No motor sounds, no ski lifts, no blaring music, no background noise – just silence. It is a silence that becomes the centre of the experience; air, that is as crisp as can be and a view that takes your breath away. Depending on where exactly you are, you can admire the majestic beauty of Pelmo, Marmolada, or the Cinque Torri – "actually there are more than five peaks, but that's how many you can see from Cortina," Constantini adds. If you're looking for peace and quiet, here is where you will find it.

Time to smell the flowers

"After a mild winter, the heather starts growing as early as January," Constantini tells us as he points out the deep purple of the heather flowers growing at the side of the trail. Next to it is an old Stone pine, a rare tree that only grows in the Alps: "Stone pines need the cold all year round," the regioliere tells us about the tree also known as Arolla pine or Swiss pine. Often called the 'Queen of the Alps', "this fine and noble tree offers the lightest wood; it smells delicious and is said to have medicinal properties. Beds made of Stone pine and pillows filled with the tree's shavings are said to promote sleep and lower increased heart rates," Manuel Constantini explains. Stone pines grow here thanks to a certain bird: The pine's seeds are too big to be scattered by the wind. But the spotted nutcracker, a kind of passerine bird, snatches the pine nuts and loses some as it flies. 100 seeds will produce a maximum of two or three trees," park ranger Constantini explains. The larch, one of the oldest tree species in the world, also grows here and "…it's the only conifer that looses its needles in winter". Perhaps people who have difficulties letting go can find inspiration in these old trees?

History you can feel

Some of the trails pass by sites from the First World War – old stone walls, caves and tunnels remind us of the horrible warfare that raged here between the Austro-Hungarians and Italians 100 years ago. It's harrowing to imagine how locals hid in these small dark caves, hoping and praying that the fighting would end soon. Even though Constantini adds that "people were much shorter back then, that's why the caves have such low ceilings," the caves are grim reminders of a gruesome time. Today these sites are slowly becoming a part of their surroundings, swallowed by untainted nature.

I spy with my little eye

Patience and good eyesight are rewarded in Cortina D'Ampezzo. Attentive visitors may catch a glimpse of mountain goats or chamois looking for a patch of juicy grass along the steep cliffs. Bringing along a pair of binoculars is highly recommended for those who wish to spot some rare species in their natural habitat. Deer, stags and wild hares are at home here – extremely shy animals that go into hiding as soon as they sense human presence. Most often you will find their tracks in the snow, telling a tale of hunter and hunted.

The natural park is not only a great place to get away from it all in winter – summer is a wonderful time for hiking trips, climbing tours and admiring the breathtaking scenery. Or maybe some time between the seasons: "My favourite time is when the seasons are changing. The light is simply gorgeous," Manuel Constantini raves about the park he has been taking care of for more than twenty years – and will hopefully continue to preserve for many years to come!

The traditional institution of Regole D'Ampezzo (engl. the rules of Ampezzo) was founded in the 13th century. The collective was comprised of shepherds and farmers who formed a community and, following a set of rules called laudi, governed and cultivated fields, forests and high pastures. Originally two communities, Lareto and Ambrizola, the Regole subsequently grew to eleven collectives. Today they are responsible for almost 40,000 acres of forests and pastures in Italy: They lumber and sell wood, keep grazing livestock and organize cultural activities aimed at preserving local Ampezzo traditions. They became the official stewards of the Natural Park of the Ampezzo Dolomites in 1990.