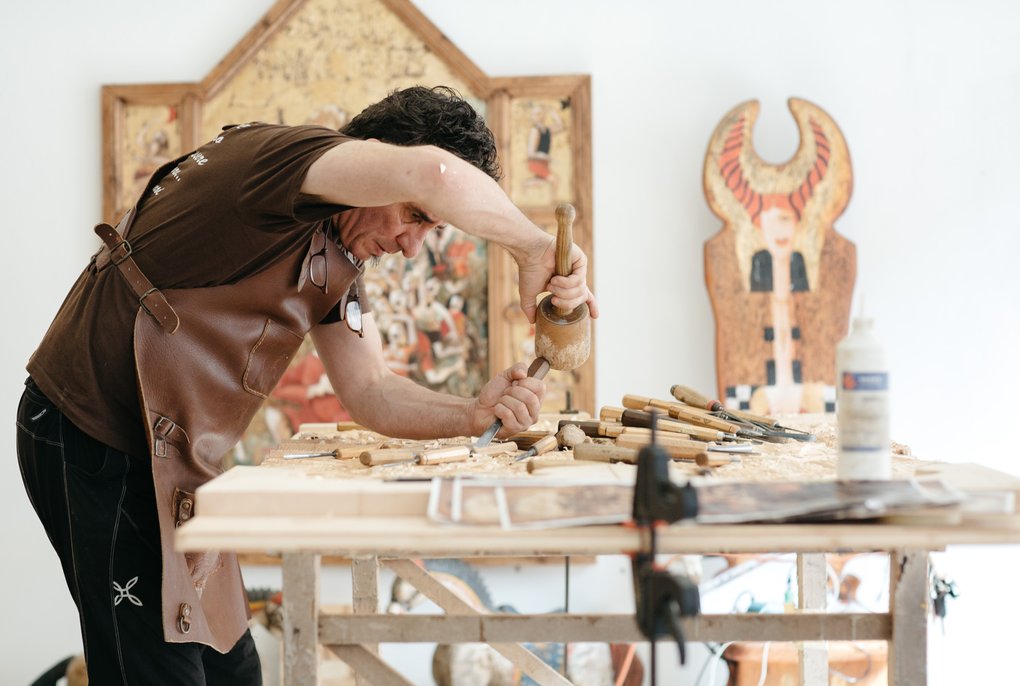 When Mauro Olivotto “Lampo“ (in English: lightning) talks about the Dolomites and their legendary original inhabitants, the gnome-like Giauli, you will repeatedly hear the word “amore“ and see him tear up. The sculptor simply loves his homeland and the twenty wooden figures with pointed ears who have now also caught Disney’s attention.

Red rolls and wallows in the chips of wood on the floor of the studio, which indicate that Mauro Lampo is in the process of filing away at something large. This is a commissioned work, he states, and that he is unable to say anything further at present. Sometimes the small red cat of the artist also plays with the soon-to-be-famous wooden figures who have currently gathered close the entrance. Perhaps the Giauli know that they will not stay there long - they tend to get around a lot: Mauro Lampo takes them with him whenever he goes up to the mountains or swimming in the lake, and sometimes one of them may even accompany him on a trip further afield, for example to Mongolia, which he is soon to visit.

“La Terra dei Giauli“, the land of the Giauli - this is the title of the book that Mauro Lampo has written together with his colleague Alessandra Piller Cottrer. It tells the history of the Giauli people, the ancestors of today’s inhabitants of the Dolomites. They are said to have lived here 200 million years ago, just where Mauro Lampo was born. The Giauli are curious, gnome-like creatures, half-man, half-Swiss-pine. They have only four fingers on each hand and their ears are pointed. They are immortal and immune to diseases of all kinds; they cope well with extreme temperatures. They do not need language - they communicate by telepathy.

They are kindhearted, placid and live in harmony with nature for they are a part of nature. There are twenty different characters with names like Giusto, Ines, Arnika, Rosina or Bortolo. Mauro Lampo has brought them all to life, carved them from the wood that they represent. According to Mauro Lampo, Swiss pine is simply the perfect wood - it is also called the “Queen of the Alps”, a particularly precious, light wood which is said to have a positive effect on your wellbeing. Over a hundred hours of work went into each figure, something you can sense when you look at them and take them in your hand: every eye and ear, every neck and beard is just right. The creatures are special. This must also have been obvious to Disney since the film producers now even intend to devote a film to the Giauli of the Dolomites.

“If I could not see the Pelmo, I would die“

Mauro Lampo loves the Dolomites, he grew up here and has climbed every mountain in the region. He feels “Amore!“ for Cortina and when he has been out and about in the world - last year he travelled to Bolivia and Peru, for example - he is always glad to get back home, full of inspiration which he can then allow to flow into his work. “I was lucky enough to be born in paradise“, he says and, and as he speaks, he makes auspicious gestures in the direction of the sky. He calls the mountains his teachers (“Everything looks smaller and less significant from the summit of a mountain“); he was born “with a view of a sheer rock face“ and if he could not see the Pelmo – at just 3,200 meters one of the highest mountains in the Dolomites – he would die, he says with a theatrical gesture but probably without exaggeration.

An artist is someone who makes the invisible visible

Talking about teachers: Mauro Lampo believes we could all learn something from the Giauli. Their care and respect for the environment, their willingness to share and their community life – values that are being increasingly lost in our society. Values that he wants to bring back into the world through the Giauli. For this is precisely the function of the artist: “An artist transports messages. It is his responsibility to make visible what is invisible. He himself stays in the background,” - this is the viewpoint of the sociable sculptor who knows everyone in his village where he runs his studio and where there is always something going on. Artist friends from far away frequently come to see him, at the moment it is the Egyptian artist Wael Shawky, for example. He contributes to the secret project that produces the wood chips with which the small red cat is so happy to play.

Mauro Lampo also knows about the power of “cat content“ (the presentation of cat photos and videos, often without context, on the Internet with the conscious or unconscious aim of attracting attention): Just take a look at the Giauli’s own Facebook Page. There you can also learn what the Gauli are currently up to and who has stopped by, in the wonderland of Mauro Lampo.