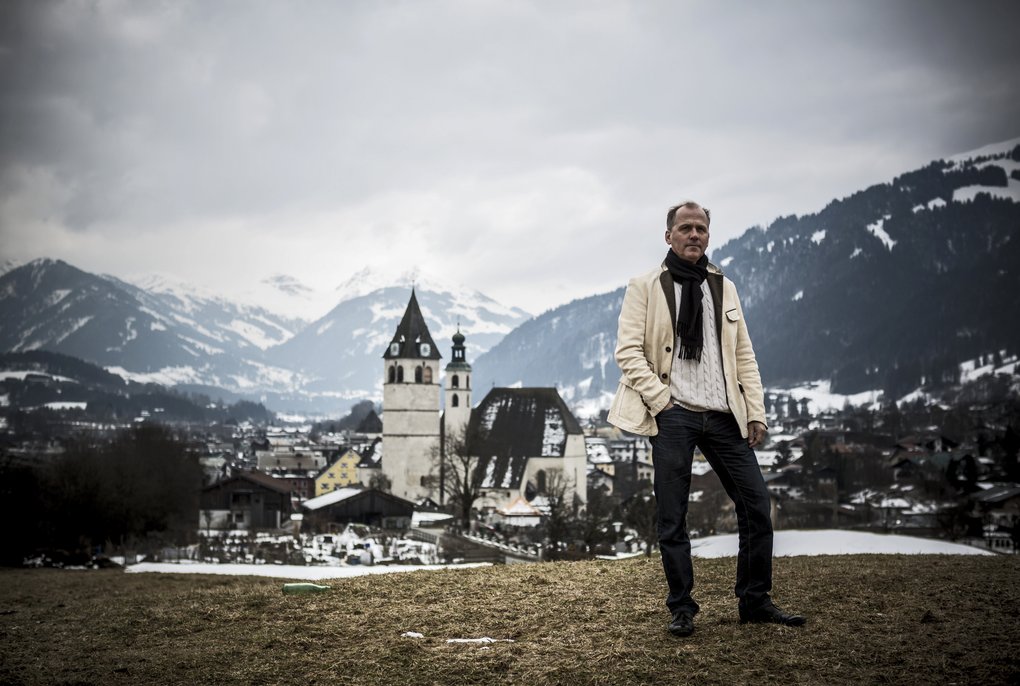 Walking through Kitzbühel you cannot help but notice the nice pastel facades of the houses in the heart of town. They have not changed since the 1930s and won’t do so in the future either because they are, in fact, part of the cultural legacy of Alfons Walde, the famous painter and architect who is said to have invented the holiday resort of Kitzbühel.

“I know so many people who, upon returning from a skiing tour, say, ‘Oh, today the snow and the sky were so Walde’,” actor Michael Walde-Berger says as we meet him on the church square. It is the effect the paintings of his late grandfather still have on people, and it would, in fact, not be wrong to call the exclusive ski resort “Walde Land”. The Kitzbühel logo – a chamois in elegant red – was designed by Alfons Walde for the local skiing association, just as was the mountain station of the cable car leading up to the starting point of the infamous Hahnenkamm ski race. As the town’s cultural consultant, Walde drew up the guidelines on the official colour scheme for the houses in the town centre, which are still valid today. But although he was a trained architect, he earned his living mostly by painting. His trademark motif was the Kitzbühel Alps in all their fascinating nuances; the farmers on the lush summer meadows, the skiing tourists on the stunning white slopes.

Some of them were invited to his notorious parties, “up there, in his studio,” Michael Walde-Berger says, pointing to a yellow house across the town church, another motif Alfons Walde depicted several times.
The artist openly celebrated a life of art and sex in a community of devout catholics, something his grandson finds very amusing. Perhaps these contradictions where what fuelled his grandfather’s artistic passion? It was an open secret that Alfons Walde loved the curves of a woman just as much as the beautiful shapes of the landscapes around Kitzbühel. The two were his favourite subjects, although his first exhibition of nudes in the 1920s was slated by critics.

Grandfather and grandson share a deep emotional bond with their native country. Alfons Walde was born in 1891 in Kitzbühel as the son of a headmaster. Being talented both artistically and socially, he quickly worked his way up. “Just as my grandfather I am always looking for the authentic and how to express it in my art,” Michael Walde tells us. In Alfons Walde’s work, this is reflected in how he captured light, perspective and depth, how he refrained from depicting the exact facial traits of his protagonists.
“When I prepare for a role, I also focus on a few traits, the ones that seem most important to me. The rest I leave to be completed in the minds of the audience,” Walde-Berger describes his artistic approach, shaped in the time he spent at the Lee Strasberg Theatre and Film Institute in New York in the 1980s. In their concept, natural acting is key. “Good acting is fuelled by genuine emotions. Just as my granddad, I want to express my calling in me, through me, in all authenticity.”

Without a doubt, Alfons Walde also was a savvy businessman who knew how to sell paintings. He used his imagination to realise his vision of nature around him and sometimes moved a mountain to some place else if he felt the painting would look better that way. He often used a bird’s eye perspective, evoking an elevated feeling. “All these shades of blue in his skies, the white hues of snow... I think he captured what many people could see and feel,” Michael Walde-Berger sums it up.

Being at home in Kitzbühel

After graduating from technical university in Vienna and serving in WWI, Alfons Walde returned to his native Kitzbühel. Although he had been rubbing shoulders with artists like Klimt and Schiele who clearly had an influence on his work, it was here, far away from the big city, that he found his freedom. In Kitzbühel, says his grandson, he could “be who he really was and do his own thing, for he was not one to conform.” In addition to his studio in the heart of town he had a hut up on Hahnenkamm where he would paint and, in the name of art, experiment with sexuality – a period that is well documented in photographs in his artistic estate. Well, there’s nothing that kills inspiration more than boredom, one might argue, and so his lust for life was an endless source of inspiration, as were a woman’s curves – shapes he also found and loved in nature. And Walde’s colourful lifestyle definitely paid off: Prices for paintings like “The Farmer’s Sunday” or “The Ascent of the Skiers” are in the six-figure range today. “His idea of free love, however, didn’t really work out,” says Walde-Berger, smilingly, “he was married three times.”

Although the stages of this world are alluring, Michael Walde-Berger keeps coming back to Kitzbühel. „This is the place of my childhood. Pfarrau, down there, is where we used to play, where we snitched strawberries from the farmer until he came after us with his shotgun. It was paradise,“ he remembers with a laugh. He feels a bond with the people here – “there is a lot of connectedness in this town. You might not see it at first because it’s covered by all the Kitzbühel glamour, but it definitely is there.”

“It’s very sad that I never met him,” the actor says about his late grandfather. But he still had the chance to get to know him - through his diaries, letters and collections of jokes. “I read it all and it felt so familiar; it’s the same sense of humour. But he also had a critical mind. I think, we would have had a fabulous time.”
Although Walde-Berger feels very blessed to be part of an artistic family, he says, “In the end you can only be proud of what you have achieved yourself. What I love about my grandfather’s legacy is the intangible. There is an incredible amount of that in his works.”