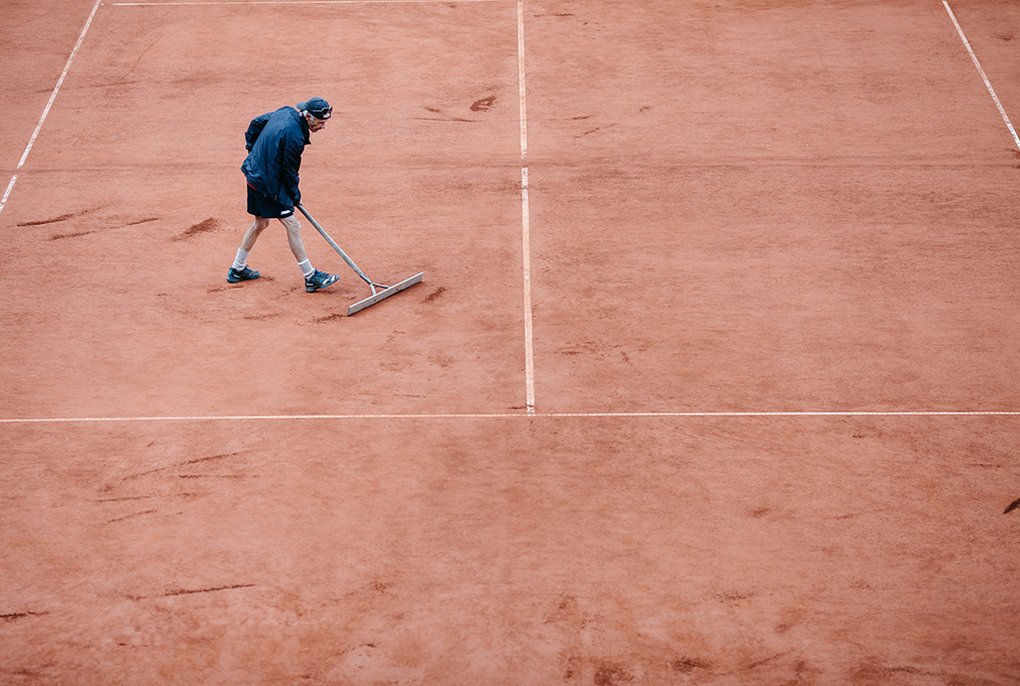 Fritz Mitteregger stands in the middle of Kitzbühel’s centre court. As someone who is not used to not moving on the court, he clearly finds it difficult to stand still for the photographer. “Bravo Fritz!” and “You are the best!” some teenagers yell from the ranks. It is very obvious that everyone likes and appreciates Fritz Mitteregger around here. After having his picture taken, however, he immediately grabs the drag net and continues to make his rounds on the court. Two days to go until the beginning of the Generali Open. Two days left for perfecting this court. This has been Fritz Mitteregger’s job for the last 33 years. Still, he firmly refuses to be called “a legend among groundskeepers”. “It’s usually dead people who are legends,” he says wryly.

Many say you are “the real hero” on this court. How important is the job of a groundskeeper?

Fritz Mitteregger: There were situations where the weather was so crazy and everyone was running around, covering the court, uncovering it again, trying to make it all work. After all, everything needs to run smoothly at such an event. Of course it makes me happy when all this work is appreciated. Still I don’t think anyone should take themselves too seriously.

Actually, Fritz Mitteregger, a trained pastry chef, has retired two years ago. In the weeks leading up to the big tournament, however, he is back on the court day and night, working 12, 13, even 15 hours a day when needed. You will rarely find him sitting down; even as we speak, he paces up and down the court.

How do you become a good groundskeeper?

Fritz Mitteregger: There are no good or bad groundskeepers. There are only those who like to work and those who do not like to work. When I started working here I thought to myself: “Oh my, I won’t last long around here.” But then, somehow, I became passionate about this job. On the court, everyone has to find their own way. Every court is different – some have more shadow, some less, for example. I also found out that the effect of irrigation is highly influenced by the lunar phases. In a decreasing moon period, all the water just seeps through – and nothing at full moon.

Mitteregger wears woollen socks – in any weather, for what helps against the cold also works against the heat, he says. His collection also includes white ones, in accordance with the players’ dress code on the court. Yet he has never played himself and won’t start now, he says, adding that tennis is “for the young guys”. Before he started working as a groundskeeper he was not even interested in tennis, but the 33 years working for Kitzbühel Tennis Club sure turned him into a fan.

How have the sport and the tournament changed in the last three decades?

Fritz Mitteregger: There was a time when all the hustle and bustle surrounding such an event became almost more important than the sport itself. That was never my cup of tea, though. Today, it is the sport that is in the focus again, and the sport itself has changed a lot. Back in the day, the players moved much more playfully, almost like dancers. Today my knees hurt just from watching! These guys are incredible high-performance machines. And Kitzbühel provides the perfect stage for them. Many organisers in other places can only dream about such conditions and surroundings. The best of the best in this unbelievable scenery – it’s a highlight for both players and spectators.

On the walls of his small flat on the grounds of the tennis club where he lives during the tournament are countless photos showing Mitteregger with the legends of the sport: Boris Becker, Pete Sampras, Thomas Muster, to name a few. They show that Mitteregger is not only a hero among his colleagues. When Austrian tennis legend Thomas Muster, for example, had finished his lap of honour after his last game, he ran over to Fritz Mitteregger and hugged him goodbye. The groundskeeper’s favourite player of all time?  Àlex Corretja from Spain, a real gentleman, polite and grateful, says Mitteregger. In another anecdote, he shares with us that he once knew a player who loved his tea with a dash of schnapps.

You know many of the players in person, witness everything close-up – how emotional do you get about the matches?

Fritz Mitteregger: Thomas Muster always loved playing on a court with more clay, so of course I saw what I could do about that. In my early days I became extremely engrossed in it all – it’s different when you are young, you know. Today I am more relaxed about it. I just sit back and let the guys play.