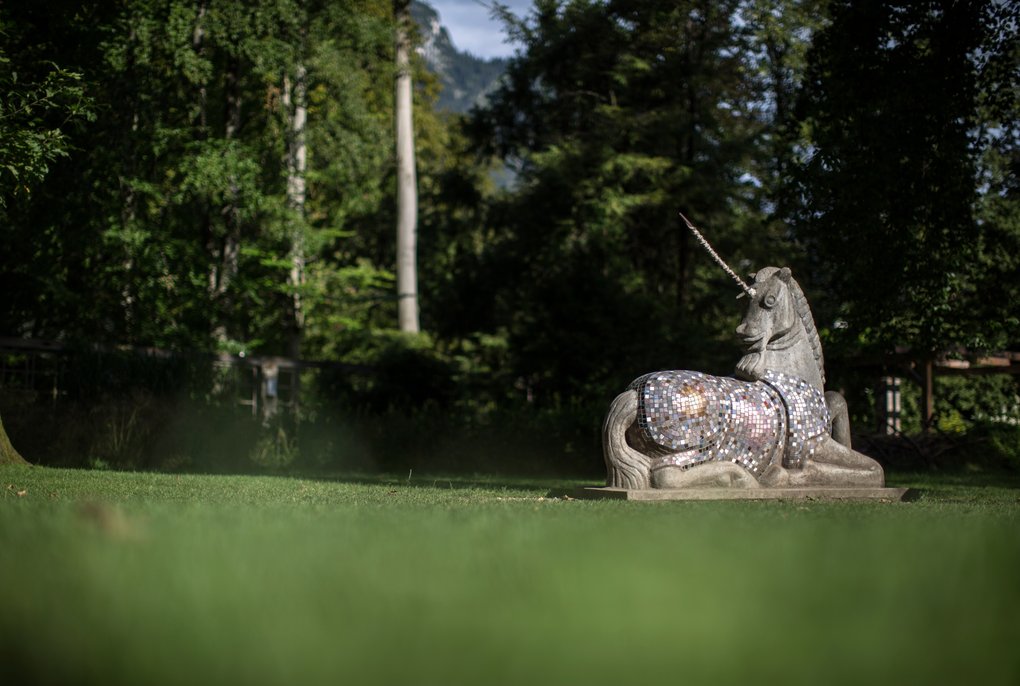 A walk through the Michael Ende Park in Garmisch-Partenkirchen is like browsing his most famous works. You can climb the grassy back of Morla, the turtle from “The Neverending Story”, sit down in the amphitheatre from “Momo”, find your way through the turf maze under the big lime tree that the author himself planted decades ago or walk through the enchanting herb garden where all kinds of magical herbs, flowers and grasses flourish. Watch the goldfish swim in a fountain full of water lilies and look for the wonderful statues of fantastic creatures like unicorns or the winged saurian. The famous writer who captivated both children and adults around the world with works like “Jim Button and Luke the Engine Driver”, “The Neverending Story” and “Momo”, has clearly left his mark on his hometown. Not least with the help of Georg Büttel. In 2003, the German writer and director became artistic director of the annual Kultursommer festival celebrating Ende, one of the town’s biggest artist. Moreover, Büttel has founded the “Phantastische Gesellschaft” (Fantastic Society), an association for the promotion of all the stories that Michael Ende has written or that have inspired him. “We provide a platform for everything that Michael Ende liked himself and everything that makes the cosmos of fantasy grow,” says Georg Büttel.

This year, it’s all about Momo for another time. The story of the little girl who could listen like no one else and who stood up against the Men in Grey who steal humans their time, is one of the great classics for young readers (and old!) and it is as relevant today as it was back in the day. The book deals with stances like “time is money”, looks into time and its relativity (“We all know that an hour can seem as eternity or pass in a flash, according to how we spend it.“) or how searching for the big happiness can distract us from the beauty and significance of the now (“There’s nothing more dangerous in life than dreams that come true.”). “It is astounding how much Michael Ende knew about time and how much of it he was able to pack into ‘Momo’,” says Georg Büttel.

In the theatrical production of the story, Büttel and his directing partner Gaston Florin put great attention to “leaving enough room for the audience’s own imagination and refraining from firing ready-made illusions all over the place.” Therefore the play they put on in Garmisch-Partenkirchen is not a special-effects show but a strong, expressive performance with a minimalist stage setting, leaving enough room for the audience’s own imagination. “The real adventures are in your mind,” sings Austrian artist André Heller in a song written in the 1970s, around the time when Georg Büttel was introduced to the works of Michael Ende in school. “Every day when I came home from school, I threw my schoolbag in the corner, said I couldn’t have lunch for another hour and ran up to my room to read. Very often, it was Michael Ende I couldn’t wait to read.” Georg Büttel remembers. One day, the famous author came to visit his school. “There was absolutely nothing patronizing or avuncular about him. He met us all as equals,” he says. And the great author also showed another side of him, a side Georg Büttel had known nothing about so far. Michael Ende recited one of his ballads, the one where he tells about the heroic death of a German military officer.

The whole encounter had a really great effect on young Georg Büttel and sure paved the way for his lifelong interest in the author. Many years later, a group of young people gathered for their first Kultursommer production. “We went to the local youth centre and I said, ‘I’m going to be the director’, and Thomas Brunner said ‘Alright, then I’ll make the stage’ and Pe Hebeisen said she would do the costumes and play a role and Angela Hundsdorfer took a main role and later Harry Helfrich joined us as well,” Georg Büttel tells us about the beginnings of this team that has been making Garmisch an exciting place for theatre fans in the summer months for the last 13 years – and which will also take care of Michael Ende’s phantastic legacy in the future.