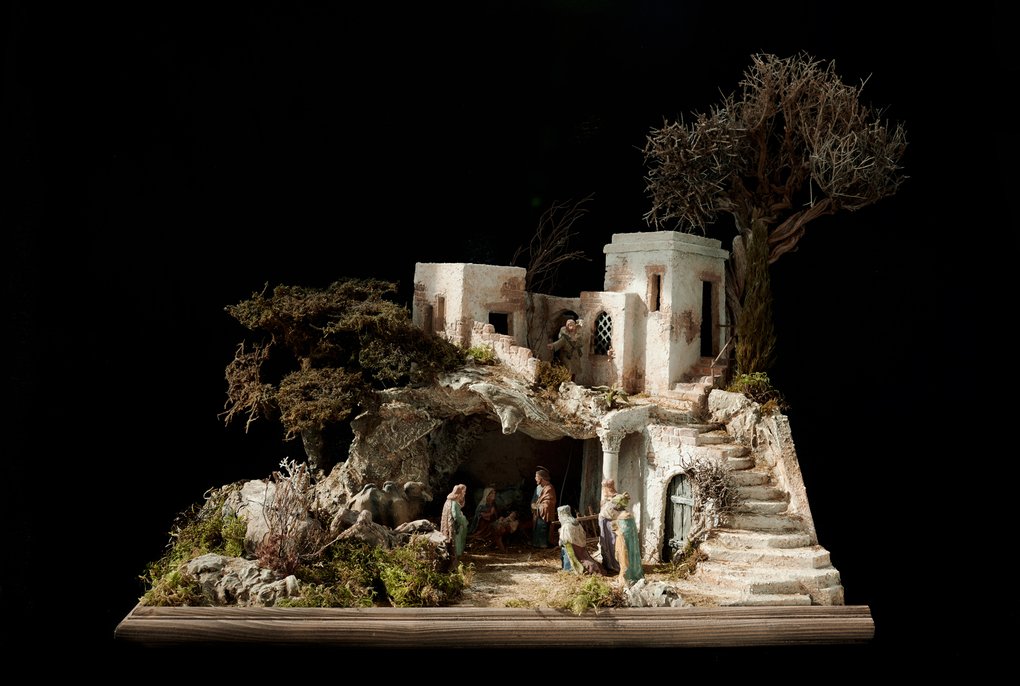 The School of Crib Design (German: Krippenbauschule) in Garmisch-Partenkirchen has recently drawn a record number of students – not only during Christmas season. Craftsmanship is clearly on the rise. Cultivating one’s passions might also be one of the symptoms of today’s collective search for meaning, which also casts a new light on cultural traditions such as crib building. We spoke with master builder Martin Königsdorfer about the desire to create – or rather re-create – new values in life.

While the art of crib building has always played an important role in Alpine culture, it is now experiencing a modern revival. People are becoming more aware of their cultural roots and are trying to explore them through traditional craftsmanship. Conceptions such as “tradition” and “meaning” are also interesting aspects of global trends like DIY and self-discovery – ranging from cooking to Yoga – that seem to reflect a whole generation’s search for allegedly lost values.

The School of Crib Design in Garmisch-Partenkirchen also wants to convey “values” rather than just present biblical scenes. “We want to hand down this tradition and give it a modern twist,” says Martin Königsdorfer. The course’s curriculum offers an impressive range of classes from botany to gilding to background painting. Delicate wooden figurines as well as miniature versions of nature and architecture make for a beautiful setting with the nativity scene in the centre of attention. You are drawn into this scene for a moment, before your mind gets lost in the three-dimensionality of the story and landscape surrounding it. That’s where culture is brought alive and really influences the audience.

Searching for a deeper meaning

Despite its originally religious background, the aspect of nature has always played a key role in crib making. It’s about “presenting nature’s processes and effects through this miniature world,” says Königsdorfer, and what he means are all these beautiful colours and shapes as well as their innumerable breathtaking nuances we see. It almost seems like an attempt to tame nature and all things that tend to be incontrollable in real life. “But at the same time, it leaves us astonished and a bit humbled to see and understand what usually lies beyond our imagination,” says Martin Königsdorfer. And that might tell us something about the higher meaning behind nativity scenes: the values we live by.

Becoming addicted to peace and quiet

„Spending all these hours designing and crafting gives you a new view on your own life and, of course, a more critical view on mass-produced goods,“ says Martin Königsdorfer. Because creating something with your own mind and hands gives you a whole new understanding of things. It requires you to take the time and watch your work grow. The more sensitivity and love for detail you invest, the greater the visual and emotional outcome of your work will be. And very often, those longing for self-discovery finally find themselves in their own piece of art – at least for a little while.

But it’s also about this feeling of belonging. “I am a craftsman,“ says Martin Königsdorfer, “it helps me keep my feet on the ground.“ And it helps him slow down. “Taking the time to work on my carvings is pure luxury and helps me relax. Maybe it’s this peace and quiet you become addicted to.” Especially if those handicraft skills, or rather “this connection between your mind and your hands becomes second nature to you,” as Martin Königsdorfer puts it.

Helping the audience „grasp“ a higher meaning might be the raison d'être of crib making. Especially in the early days, when not everybody was able to read and write, this way of visualising the nativity scene helped people understand its underlying meaning. “What is conveyed here is the human aspect of the scene,” says Martin Königsdorfer. According to him, the scene speaks about familial bonds and introduces the conception of empathy, which are both basic values that people relate to more than ever before. “We live in a time where everything has to be done according to certain rules and many basic human values get lost on the way.”

You need to have integrity in life

Oriental cribs are a new trend, because the landscape leaves much room for personal interpretation. The scenery can be put to life with such materials as styrofoam, powder paints, glue and gypsum. The search for perfect requisites once again takes us back to nature: larch bark can be used as roof shingles and the seeds of meadowsweet are perfect to depict miniature dates. Dealing with and trying to understand the ‘real world’ helps raise your own awareness and sharpen your perception. That’s one of the reasons why Martin Königsdorfer likes to collect his materials during hikes. “We live in a place where you can easily combine your favourite activities: You can take the bike to Lake Eibsee and up to the Stepbergalm (editor’s note: an alp that is still used as pasture area during the summer and where a restaurant offers regional snacks and dishes.) You can go for hiking tours and then stop somewhere for a snack.”
However, Königsdorfer only goes up to places where no lift will bring you. “Only people who really want to come up here can do so.” Because one thing is true for both crib making and real life: Sometimes you need to show some integrity.