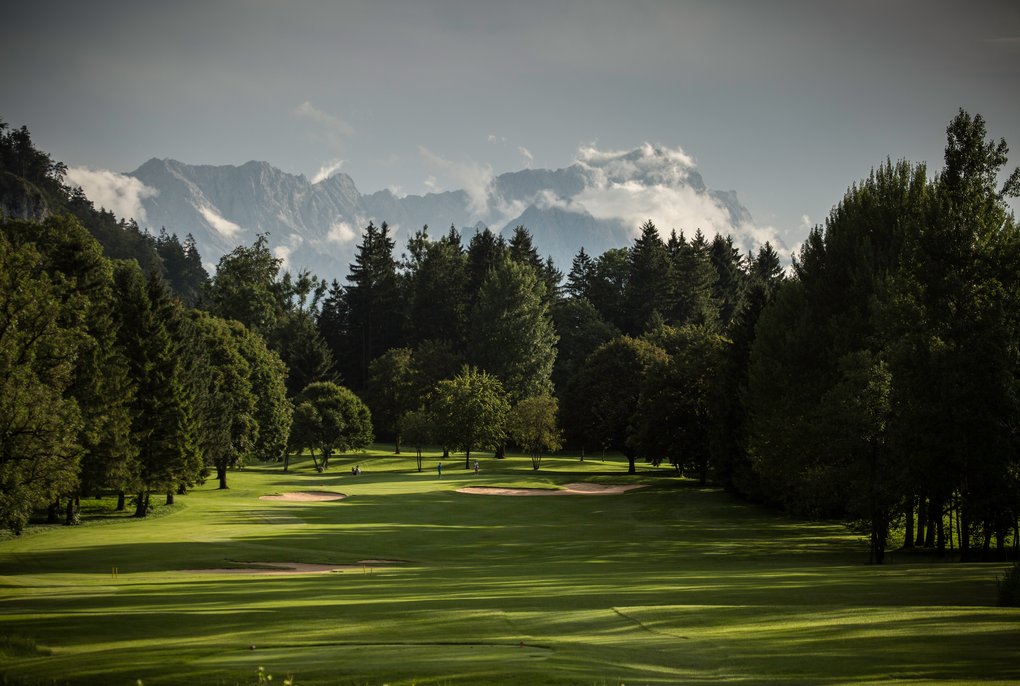 The golf course Werdenfels in Garmisch-Partenkirchen is one of the oldest in Germany. With its spectacular view of the Alpspitze and Zugspitze panorama, it is also one of the most beautiful. Built at the foot of the old castle ruin in 1930, it was intended to boost tourism in the region during the Great Depression. After the Second World War, the course was taken over by the US forces stationed at nearby Artillery Kaserne in Garmisch. Locals were only gradually allowed entrance to the club.

Peter Maninger was six years old when the Americans took over the club. He did not yet know that golf would play a leading role in his life: he would win the Bavarian championship twice, make many life-long friends, and even meet his future wife on the course. Like many other golfers, he started his career as a caddie. "For us kids it was great to carry the American players' golf bags," he fondly remembers. The kids received treats like chewing gum, chocolate bars, or a Coke – things that were rarely available after the war. Sometimes they even handed out cigarettes for the fathers. There was a lot to learn from the American golfers. Several soldiers had been professional players back home. Everything the kids learned from the Americans, they tried out on their own makeshift course on a nearby meadow. "We borrowed our parents' lawn mowers to cut the grass and then we built a few holes." Peter Maninger's first club was a sawn-off ice hockey stick that his friend carved into the right shape. Later, one of the GI's passed on one of his old irons as a reward for Peter's caddie services.

Peter Maninger obviously has fond memories of his days as a caddie. "I wouldn't want to miss that time for the world," he says. He has visited many of the golfers he met in those years; some of these old friendships continue to this day. In the 1950s, not only simple soldiers played golf at Werdenfels. US president Dwight "Ike" Eisenhower – known as a passionate golfer – visited the golf club in Garmisch on numerous occasions. Nonchalantly, Peter Maninger mentions that he carried the president's golf bag. He shares that Eisenhower was a kind, but fairly reserved person. And what about his golf skills? "He was okay. Not bad for a politician."

In 1958, when he turned 18, Peter Maninger was invited to become a member of the Golf Club Garmisch-Partenkirchen. The number of German members was still limited to 70. "We were only tolerated. Of course that led to a certain sense of unease," he remembers. And so, in the 1960s, the idea was born to build and open a new golf course in the area. After years of searching for the perfect spot, they found Oberau, 10 kilometres north of Garmisch-Partenkirchen. In 1974 they opened their new, nine-hole golf course and golf club.

Peter Maninger served as a member of the board for the following 25 years. As the board's planner he played a decisive role in enlarging the course to 18 holes in 1990. One reason for the expansion was to become more athletically competitive. "Nine holes simply no longer met international standards," Maninger explains. In the course of its renovations, the golf club also made sure to avoid any steep ascents to the green, making it more attractive and easily accessible to tourists and day-pass visitors.

The old course in Werdenfels stayed in business as well. "Not all the original members of the Golf Club Garmisch-Partenkirchen wanted to move to Oberau," Rolf Lehmann, president of Golf Club Werdenfels, elaborates. And so, in 1974, some members re-founded their own club, the Golf Club Werdenfels. Americans and Germans continued to play side by side, until the US government officially returned the course to Germany after many years of negotiations. Some parts of the original terrain have been preserved. "The green around the ninth hole dates back to 1930," Lehmann tells us. The original tree population of birches, pines, and maples survived in large parts. Other areas like the teeing ground were expanded and modernized with club members' generous financial and hand-on support. Golf Club Werdenfels decided not to expand their course to eighteen holes. A shorter course has its advantages, too: "You can play a quick two or three hour round of nine holes after work. And then you'll still have time to have a chat at the club house."

Rolf Lehmann believes socializing is key for the club in Werdenfels. "Without social interaction a golf club like ours couldn't exist. Keeping a nine-hole course commercially successful is a nearly impossible feat," he explains. On the golf course – and in the clubhouse later on – quite a number of friendships have been forged over the years. Even a few members of the local American community still like to drop in for a round of golf, or just for a beer and a nice chat with one of their German mates.