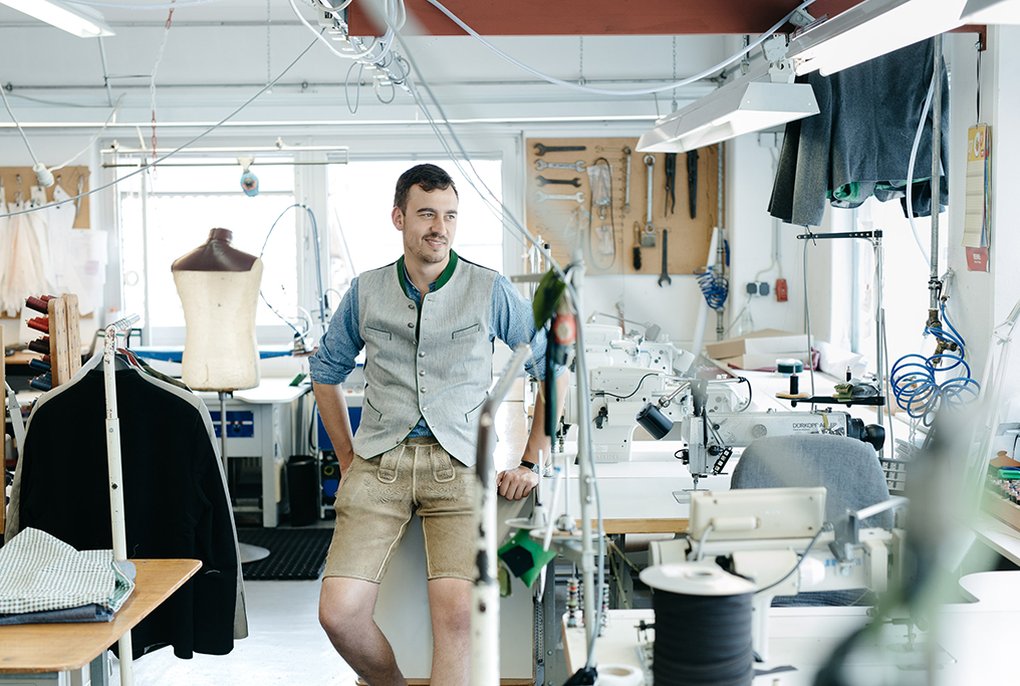 When strolling through the pedestrian zone in the centre of Garmisch-Partenkirchen, people in traditional lederhosen or dirndl dresses are just as common a sight as others wearing jeans or casual summer dresses. Even the employees of local banks like to wear lederhosen instead of classic suits. So does Franz Grasegger – on the job and in his time off. Together with his father, the 29-year-old runs Trachtenhaus Grasegger, a store for traditional clothing in Garmisch-Partenkirchen.

Traditional clothing is still very present in everyday life in Garmisch-Partenkirchen and Bavaria in general. But is it really good for daily use?

Our modern pieces are very suitable for everyday business life. At the moment, the classic Italian cut is all the rage: narrow shoulders, tapered waist, sporty look. Why shouldn’t we apply these features to a traditional suit as well? We don’t consider that to be disrespectful towards tradition. Someone who looks a little deeper into the matter will soon realise that even the classics of traditional fashion have been subject to changes over time. So why not provide a modernised version of traditional clothes for young business people?

Ever since today’s building was erected in 1984, Trachtenhaus Grasegger, a family business, has been offering traditional clothing only. Before, it was a joint enterprise of the Grasegger and Hartenstein families, selling traditional and “regular” clothing. When the new building was ready, the two families decided to part ways professionally. Since many local tailors had already closed shop and traditional costumes typical for the region could not be ordered at big manufacturers with serial production, Franz Grasegger’s father Thomas started a co-operation with a little manufacturer in Kempten in South-West Bavaria to fill this niche. In 2000, the Graseggers acquired this supplier and re-opened it as Manufaktur Grasegger in nearby Farchant. Today, the Graseggers can produce anything from a selection of 1,500 original costumes on demand.

We think it is important to find a piece that just suits each individual. If a guest from Düsseldorf or Northern Germany comes into our store, I won’t recommend him to buy the traditional clothes a mountain farmer from South Tyrol would wear, even if the colours or the cut would look good on him. There is a big difference between “This looks good on you” and “This suits you”.

Today, Franz Grasegger wears his lederhosen with a waistcoat and a Korean shirt. And sneakers. Still, it all looks well rounded; his outfit clearly shows how much he understands fashion, and traditional clothing in particular. It reflects the motto of the family’s business: Being “a modern house of tradition”, committed to preserving cultural values without moralising. Modern twists are welcome, as long as they don’t interfere with traditional core values.

Many people say combining lederhosen with sneakers is an absolute no-go. But you obviously prove them wrong.

Well, I would not wear this to a traditional beer tent, but it’s okay for a casual occasion like this. These lederhosen trousers are based on the traditional ones worn in Salzburg. These guys have always been more open to putting a new spin on traditional clothes, say wear them with a belt or braces, with knee socks or without them. So I think it is okay for me to combine them like this. I generally don’t see traditions in clothing as strict rules. If you want to preserve traditions in the long run you must allow people to play with them, to make their own interpretations. But of course there are also costumes and situations that require that we respect certain conventions.

Franz Grasegger has been working for his family’s business for five years now and became a managing partner last year. 107 people now work for Trachtenhaus Grasegger, two thirds of them in sales. The company also supplies around 200 other traditional clothing stores. Coinciding with the company’s 30-year anniversary 2014, the house was reconstructed and expanded to 1,800m2. The industry is clearly booming.

For a long time, traditional clothing was considered old-fashioned and out-dated, but today, it has become very popular again. Is this a result of big events like the Oktoberfest, where people from all over the world see and wear Dirndl dresses and lederhosen?

The Oktoberfest has contributed to this trend for sure, although it has also somewhat degraded traditional costumes to party outfits. At the same time, people became more quality-conscious. A few years ago, those who did not yet have some traditional costume would just buy something from the rack to go to the Oktoberfest. Then they saw high-quality dresses there and realised that their own garments looked different. Especially people who did not grow up with traditional costumes changed their approach and started to look for more background information on the matter. That has clearly helped the overall awareness for our traditions and clothes.