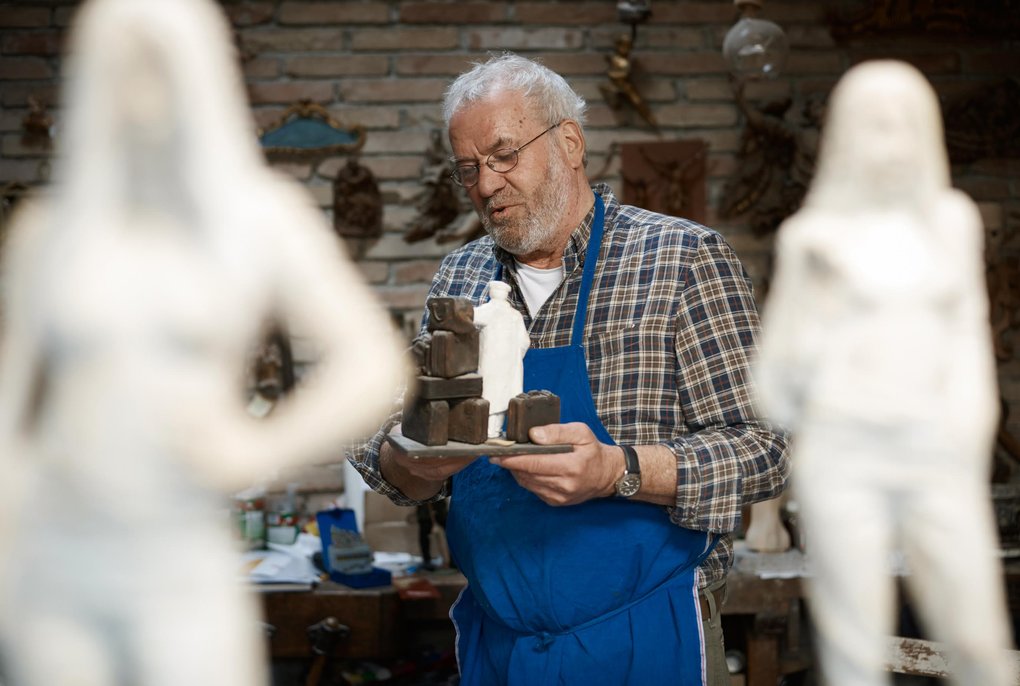 In his works, Luis Höger strives to bring traditional craftsmanship into the present. An exciting challenge for the freelance artist who can't imagine working anywhere else but in his studio in Garmisch-Partenkirchen.

The first thing you notice when stepping into Luis Höger's studio is a soothing silence. The space draws its artistic aura from a range of unfinished sculptures set throughout the room; some are bronze, but most are wooden. There's a pile of sketches here, an easel there. A well-used wooden hammer and thousands of other undefined utensils are scattered all around. The afternoon sun plays with the dusty plants on the windowsill. This place is like a world of its own. Any arising sense of nostalgia, however, is immediately interrupted.
"What an awful mess this is, I really need to tidy things up around here," says the artist as he greets us. It's pretty obvious that he's not really serious about the tidying up thing. And why should he be?

Cheerful Bavarian music starts spilling from the radio. A few wooden carnival masks and angels on the wall bear witness to Luis Höger's artistic evolution from traditional craftsman to an artist. This becomes even more evident when you look at the spruce wood sculpture of a woman he's currently working on. About 50 centimetres tall, she confidently poses on the workbench. Her delicate little face has a strong expression as if she was about to say something. It's obvious that she's a chip off her master's block. Höger exudes the same sense of sincerity and confidence as he stands there with his arms crossed in front of his blue work apron and looks a bit critically over the rim of his glasses at the sculpture's body.

The allure of everyday life

Luis Höger is interested in the people of our time, their feelings of forlornness, vulnerability and banality. The sculptures on his website have titles like Hermann with his Wife and a Green Bag (Hermann mit Frau und grüner Tasche), The Boss Lady (Die Chefin), Karin, Eva, or Mr Schmitt (Herr Schmitt). Everyday situations. Luis Höger always carries his camera with him so he can capture the seemingly simple scenes that determine our lives one moment after the other. Just like the young woman tinkering with her mobile phone. "I really liked her pose and the movement of it all." You can sense the intellectual, the thinker, the observer in Höger, who studied at the Academy of Fine Arts in Munich in the 1970s. A time when being an artist still meant clashing with politics and the establishment.

Women are his preferred subject, spruce his preferred material. Even though the latter poses stylistic limitations, he relishes the multitude of structures that unfold on the wood's surface. He points out the woman's shapely calves: "…because the growth rings play so beautifully into this lady's foot."
Quick pastel sketches help him translate his figures into the moment. "If something's too clean-cut, it can become tricky, " Luis Höger explains. It's always a balancing act when it comes to realistic figures, "because they can very quickly turn out to be rubbish." It's easy to see what he means. His sculptures could have easily become pathetic; but as they are, they are touching in all their authenticity.
Balancing the thin line between reality and art poses a challenge every time, Höger explains while making coffee for us. The package says Wildkaffee. They're these young people who run a café where he likes to go, Höger adds.

I can't imagine a better place than right here

Luis Höger hasn't always been an artist. For a long time, he crafted saints and carnival masks, called "Larven" in the region. A solid job that allowed him to support his family. "I needed to earn money, so I pushed aside the art." After a phase of radical changes in his life, including a new life partner, he decided to follow a wholly new path. And it was worth it. His wooden sculptures are quite popular. Many customers come from far away, or find him online. Höger doesn't believe that technology will ever replace the soul of his working process or the finished works. A glance at the tree rings that caress the woman's legs like a dainty stocking prove how right he is.

Life as a freelance artist is good in Garmisch-Partenkirchen. Every morning at 11 o'clock he goes for coffee and a neighbourhood chat at Olympiastraße. "I really need that." During winter he goes skiing – as long as he's finished all the nativity scenes. This type of commissioned work continues to give him great joy.
Tradition and craftsmanship are still closely tied in Garmisch-Partenkirchen. Höger's maternal grandfather had a talent for "Lüftlmalerei", the typical local frescos that adorn numerous facades in the old village.
"Look at that incredible shadow," he says pointing at a shape below the dusty plants on the windowsill, "I can't imagine a better place than right here."