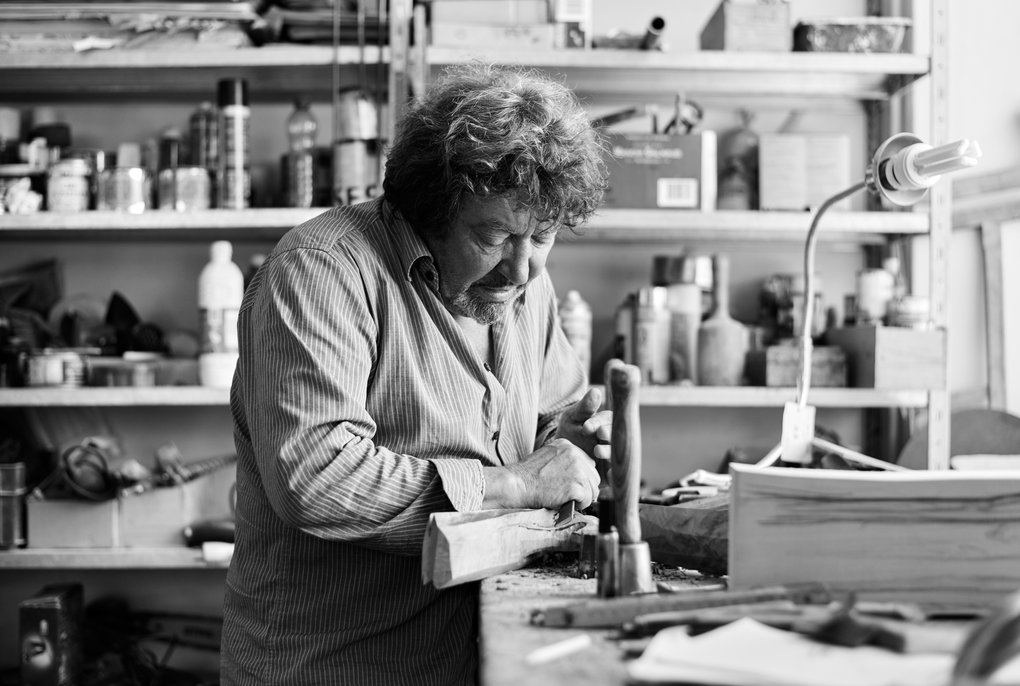 “I sculpt for love”, says Pierre Margara. The established artist is known for his graceful sculptures whose distinct organic shapes evoke a sense of unity with their surroundings. He is also a gifted raconteur when it comes to the 1970s disco days of Megève, when the town was a hot spot for musicians, artists and celebrities.

If you walk around the quaint streets in the centre of Megève you cannot help but notice a beautiful sculpture of two slim hands playing the keys of what should probably hint at a piano. It is an hommage to famous French songwriter Jacques Revaux known for his song 'Comme d’habitude' which became internationally known through Paul Anka’s version of 'My Way'.
The artist is a close friend of Mr. Revaux: a successful sculptor who has been living in Megève for more than 40 years.
Just around the corner of AAllard on Le Martagon, you find Margara’s showroom that says ‘by appointment only’. It is filled with elegant, wafer-thin sculptures from bronze and marble.
Pierre Margara is an integral part of the community and has his work spread across luxurious local establishments such as Hotel Mont Blanc or Fermes de Marie. For his achievements Mr. Margara was also awarded the honour of Chevalier des Arts et des Lettres. But if you meet the congenial 69-year-old artist, he does not talk about his success. He prefers to work away in his studio which is located on the fringes of Megève, his playful dog Caravan at his side. Only the many photographs on the wall at the back of his studio give away his active social life over the decades.

Back in the 70s there was a time when Megève was a particular magnet for the high society arriving from Paris and all corners of the world in the winter months. Back then it was St. Tropez in summer, and Megève in winter. “There was a feeling of freedom,” Mr. Margara remembers, “the nightlife was buzzing with lots of celebrities from sports, acting and fashion. We often didn’t really know who they were but we just knew that they were known. You’d get invited to parties at their chalets and it was great fun.”

You can imagine Mr. Margara as the likeable guy who just easily falls into conversation with people whether they are rock stars or the guy from the local bakery. This way he got to meet the likes of Petula Clark, known for her pop song 'Downtown' that filled the charts in the 1960s, and he made friends with the band The Shadows for whom he made a bronze sculpture of a Fender guitar.

Mr. Margara first came to Megève with friends on holiday and -  charmed by the beauty of nature and the warm, welcoming community - he decided to settle there.

Among the many collectors who appreciate his work are a number of local personalities like chef Emmanuel Renaut who he calls “a good friend of mine”. Mr. Renaut also holds a trophy that Mr. Margara designed for the annual chef ski competition in France, where the sportiest chefs race against each other. “Emmanuel won it in 2012,” Mr. Margara says. Another one of his friends in the established local community who speaks highly of the artist and his work is Frédéric Muffat, the Jumping Megève initiator, which is the annual equestrian event for which Mr. Margara also creates the winner’s trophy.
Although the party days are a thing of the past for Mr. Margara, you sometimes find him on stage at Les 5 Rues, a live concert venue that is buzzing at night. Being the multi-talented artist that he is, he composes the occasional song and loves jazz. “And, you know,” he says, trumping with one more anecdote up his sleeve, “I ran the New York City Marathon in 1985, but I won’t tell you my time,” he laughs. These days he prefers watching the Tour the France on TV or sharing a dinner with close friends. Mr. Margara definitely has many stories to tell on a balmy summer evening in Megève over a nice bottle of red wine.
“Souvenir, souvenir,” he sings, with a smile of a man who is fully embracing all of life’s offerings.