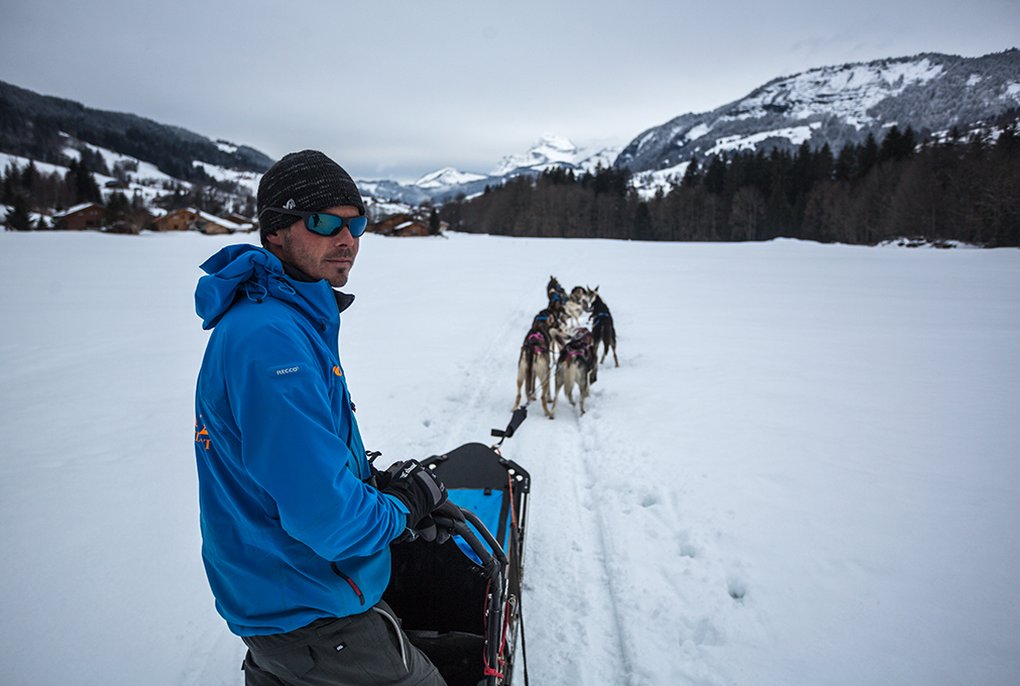 "A life without a dog is a mistake," German author Carl Zuckmayer once said. "You can live without a dog, but it's not worth it!" the German actor Heinz Rühmann believed. Philosopher Arthur Schopenhauer, who never had a wife, but always had a poodle by his side, is often quoted: "Whoever has never kept dogs, does not know what it is to be loved." Clearly, humans and dogs have a special connection.

Sometimes the connection involves more than one dog – like in the case of Jonathan Nachon from Praz-sur-Arly near Megève. As a musher, he works with eight to fourteen dogs at a time, depending on the snow conditions and how many people will go on the dog sled ride that day. The 33-year old and his partner have thirty dogs in total: "We're like a big family, the dogs are our babies. We've had most of them since their birth," Jonathan shares. He has been a musher for eight years and needs the snow, mountains, and cold to feel happy. "I always knew I wanted to work with dogs. But it was not until I saw the film ‘Antarctica’ that I realised I wanted to be a musher," he tells us as he gently strokes his lead dog who he has just hooked to the tagline. The US American film from 2006, starring Paul Walker, portrays a scientist who goes on an adventure with his pack of sled dogs. The film depicts the special relationship between humans and dogs, which Jonathan knows all too well: "There's something special between you and the dog; it's difficult to put into words and it doesn't occur between humans."

Yesterday it snowed all day and today there is quite a lot of packed snow in the area. The two of us climb on a blue sled which looks like a boat made of fabric, a type of air mattress pulled by ten Siberian and Alaskan Huskies. Our lead dog today is Twix, an Alaskan Husky of no more than nine months. His excited howls sound like a strange song and amused passers-by stop to watch his performance. The other dogs are keen on getting started as well. They bark, wag their tails, and howl into the sky. "Dogs like Twix are rare, usually the lead dog is a bit older. But he's super motivated and does a really good job," the musher explains. Not every dog can become lead dog, only seven or eight of his pack of thirty have the necessary leadership qualities. They must be reliable and motivated; "dominant dogs are rarely lead dogs because they are distracted by other dogs that we pass," Jonathan explains.

Once all dogs are hooked to the central gangline in rows of two, we get started as Jonathan calls the commands into the crisp winter air. One-syllable words, the same Alaskan mushers use: "Gee!" for right, "Haw" for left. It takes a long time to train a lead dog and to make sure that the communication between musher and dog really works. "First you practice with the dog on a leash, then you leave out the leash and gradually increase the distance. The dog should know what to do when he's 12 metres ahead," Jonathan describes the process. Once a lead dog is trained, the hardest part is done and the well-coordinated pack – usually a mix of males and females – can start pulling the sled. The males are needed for strength, while the females provide speed. That's how things usually work, but every now and then, the dogs don't feel like working. "Just like us humans," the musher laughs, "so I don't force them to run. It rarely happens that they flat out refuse to work. After all, we give them a lot of love and they give back by listening to us and running for us."

As we take a short break, some of the dogs bite the snow while others roll around. Jonathan tells us that they're hot, but not tired. Sled dogs can run up to 50 kilometres at a time. The musher gets off the sled and allows us to pet the dogs. "They love that!" After our 45-minute ride he thanks Twix, Batman, Knut, and all the others, petting them, taking off their harnesses, giving them water. Passers-by stop to watch and some strike up a conversation, asking about tours or for a picture with the dogs. Jonathan's customers are adults and children, couples and seniors, "really anyone who loves dogs and wants adventure," he says. Only a few months ago, British actress Emma Thompson and her family went on a "cani-rondo tour", a special mountain hike with dogs, which Jonathan offers in summer. "I think people are particularly fascinated with Nordic dogs, they inspire fantasies. They remind us of wolves and of wild, rough countries. "When you're on tour with them, you can stop thinking and just let go of it all," the musher says. He must agree with Carl Zuckmayer, Heinz Rühmann, and Arthur Schopenhauer: There’s just no love like dog love.