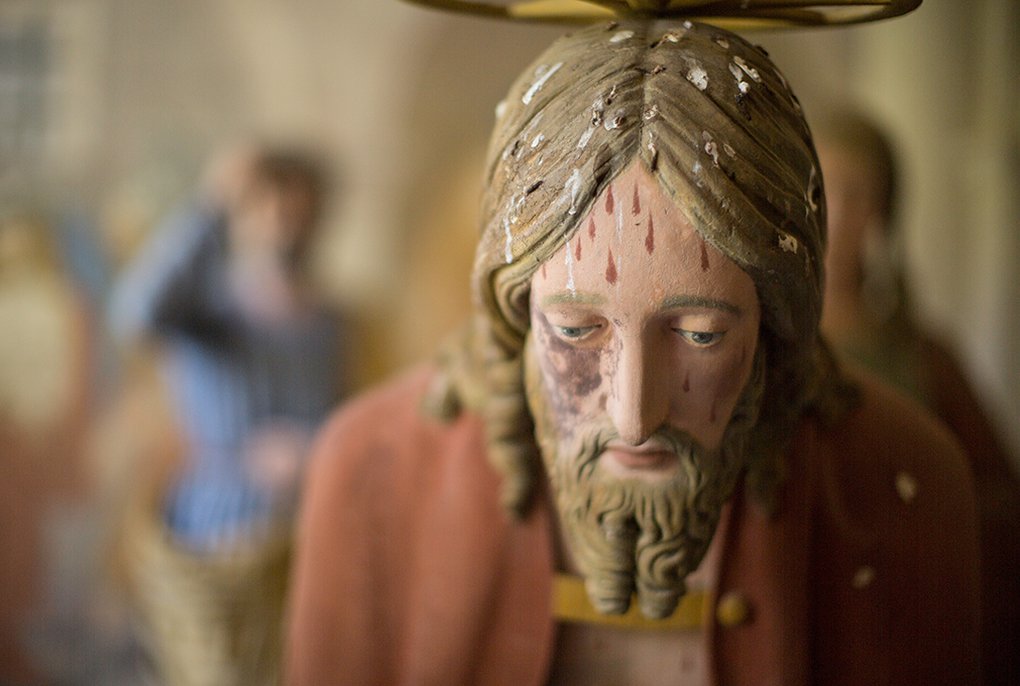 There could not be a more perfect location for a holiday resort than the one of Megève, a scenic town of 3,700 people in the French Alps: Nestled on a pass, surrounded by two mountain chains, accessible from both Italy and Switzerland within an hour by car, it offers perfect slopes for alpine and backcountry skiing in winter, and a moderate climate and spectacular views for hikers and mountain bikers in summer.

So just like many of his peers in his native Megève, Edouard Apertet started out as a skiing instructor and mountain guide. Today, he oversees the event management department of the local tourist office, where he greets us with a hearty handshake and a big smile: “Salut! You must be the guys from Best of the Alps!” We are here to talk about the book he wrote, a book on a tourist attraction that – unbeknownst to many of today’s visitors - once brought thousands of people to Edouard’s hometown: the “Calvaire de Megève”.

“A calvary is a set of religious edifices, a site of pilgrimage remembering the Passion of Christ,” Edouard explains. Calvaries are often built on hills imitating Golgotha, the hill on which Jesus of Nazareth was crucified.

The Calvaire de Megève, located on the foothill of Mont d’Arbois, a short walk east of the town centre, consists of 15 small chapels with paintings and statues recounting the last days in the life of Jesus Christ and two more chapels dedicated to the Virgin Mary, all built in the 19th century under Ambroise Martin, the parish priest of Megève at the time. During the French Revolution, many chapels and churches had been destroyed, with the clergy being ousted from many villages. Faith, however, was still being practiced in private. “After all that, Ambroise Martin wanted to create a place where people could come together for religious rituals again,” Edouard explains.

And he wanted to build more than a church. He wanted to build a site of pilgrimage, modelled after similar places in Italy, to attract people of faith from all over France. Between 1840 and 1863, he invited Italian architects, sculptors and painters to create 15 completely different chapels and hundreds of sculptures, some of them life-size, recounting the life of Jesus in great detail.

The influx of a great number of visitors, coming to see the new site of pilgrimage, was to change the lives of the people living in Megève forever. Up to that time, farming had been the only significant source of income in the village, and people were highly dependent on the seasons. In winter, many left the village to earn money in big cities like Lyon or Paris. “At that time, a good winter was a winter with little snow,” says Edouard. But this was to change when the pilgrims came. “These people needed food and lodging, so the farmers opened their stables and sold their cheese and milk. They were now able to make money at home and no longer had to leave Megève in winter.”

The whole pilgrimage movement culminated in 1866. On Assumption Day alone, 6,000 people came to the Calvary. “The first event of mass tourism in Megève!” as Edouard puts it. Unfortunately, Ambroise Martin no longer lived to witness it. He had passed away in 1863, shortly after the work on his magnum opus was completed. “It is his legacy that people became open to the idea of tourism,” says Edouard. Without him, Megève might not have developed into the coveted skiing and hiking destination it has become in the 20th century.

Still today, the Calvaire is a sanctuary for many, a place to unwind and de-stress. Some come to practise yoga under the open sky, others just enjoy the view and the peaceful atmosphere. In winter, the hills between the chapels are used for tobogganing. And once a week, Edouard Apertet comes here with guests interested in the little chapels that have become protected monuments in 1988. Today, no one comes to Megève just for them anymore; people come to hike or ski, to enjoy nature, the mountains. Hearing that it was that site of pilgrimage that started tourism in Megève comes as a surprise to many. And that’s exactly why there is Edouard Apertet.