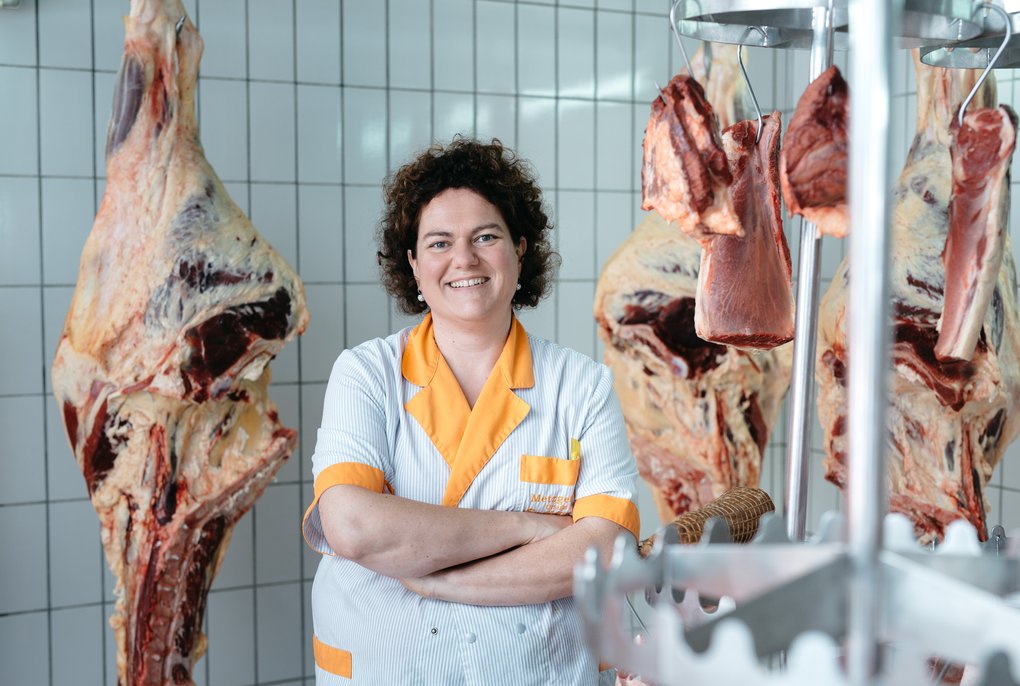 “Hard work” is master butcher Ursula Sedlmayr’s recipe for success. Sounds simple, though not very enviable. At least to those who don’t know her, because to Ursula, working is not some unavoidable chore but doing what she loves best. And making what she loves best: 98 per cent of the products sold in her butcher’s store are made in-house. “We butcher, we make sausages, we smoke and do everything else that’s part of the process. It doesn’t feel like work to me”, the 39-year-old says, laughingly. “Seems like my brain is wired differently than most girls’.”

One of a kind

Sedlmayr is one of a kind, so much is for sure. She calls her cooling house her “living room” and says things like “You won’t make me happy with a diamond ring, but man, I’d be psyched about some new appliance for my butchery!” While her schoolmates played with their dolls, she helped her father in the butchery. After finishing school, she apprenticed to her father and passed the master butcher’s exam at the early age of 20, “and almost entirely with the best grades possible,” she adds proudly. Not because grades matter to her that much, but because it was a way for her to prove early on that she has what it takes in this male-dominated field.

We’re typical girls. Sparks fly when we fight, but we’re always there for each other when push comes to shove.

The Sedlmayr family business in Garmisch dates back to 1929. Ursula Sedlmayr took over the butchery ten years ago at the age of 29 after her father had suddenly passed away. Up until today, her two sisters help out when needed. “We’re typical girls. Sparks fly when we fight, but we’re always there for each other when push comes to shove.” It’s for a reason that she mentions this; even after ten years running the business there are still some people who are sceptical about her profession. “Because I’m a girl!” she says and laughs again. But Ursula doesn’t care, “I don’t mind that. I am who I am.”

Ursula sticks to what she has learned from her father when it comes to running her business. One of the rules: When an animal is butchered, as much of it as possible is being used. Only using the best pieces of meat and throwing away the rest? Not in her butchery. Bones are used for sauces and gravy, calves’ heads are pressed and turned into aspic. “I don’t think many still do that today. Unfortunately that’s how our society works today – many people even discard an apple that has some brown spot.” It is one of the rare topics where Sedlmayr does not laugh; it is something she really cares about. “If I spot something in the waste bin that does not belong there I can get loud,” she says.

I want to be able to tell my customers about the wheres and hows of every single piece of meat I sell.

True to family traditions, most animals are picked up at the farms alive. Sedlmayr sources the best quality and from local farmers only, and she does not argue about prices like big meat production companies. “I want to be able to tell my customers about the wheres and hows of every single piece of meat I sell,” she says. Apart from all the classics she also likes to create own specialties like cranberry- or gingerbread-flavoured, hard-cured sausages.

Customers not only come for the quality and variety of her products but also for the special atmosphere that only exists in small family-run businesses like hers. She knows many of her customers, sometimes they drop in for a little chat and a cup of coffee. “We like to take time for everyone.” That includes regulars as well as holidaymakers who come for snacks to take on their next hike. Some of them even ask for their favourite Sedlmayr products to be shipped to their homes, “the most beautiful compliment of all,” says Ursula. Of course compliments for the work she does are the ones she likes best.