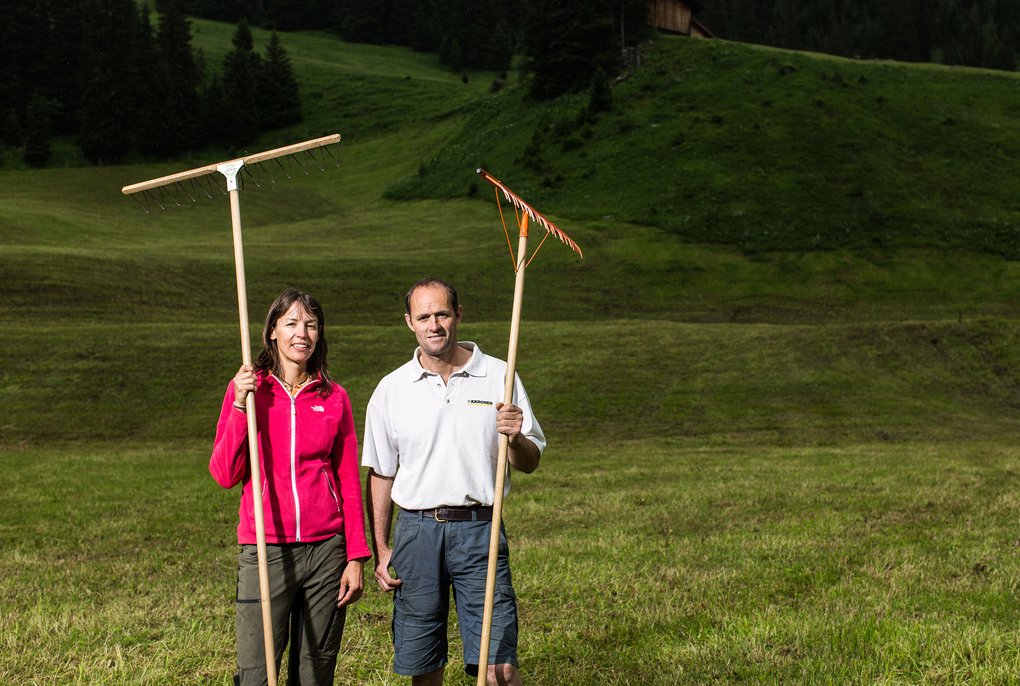 It’s true, the synopsis of Julia and Wolfgang’s story sounds like just another cliché-laden romantic comedy: German lawyer comes to Alpine ski resort, falls in love with the skiing instructor, who also happens to be a farmer, returns home, packs her bags and moves to the mountains to work on the farm and be with her love. Well, in fact all of these things happened, but the story gets less corny as we add some details. Less corny, but not less interesting. “Many people still prefer the romanticised version,” say Julia and laughs. Spoiler alert: She is the German lawyer mentioned above.

So let’s look into the details. First of all, Julia is not a city person who loves to be in an office; already as a child she loved to be around animals and nature. And it was not her first time in Lech when she met Wolfgang. And Wolfgang wasn’t her skiing instructor, they met through mutual friends. And Julia didn’t leave home immediately after meeting Wolfgang; she commuted back and forth for another year. So no, this is not a big-screen romance, but it is the story of two highly interesting people who run a 350 year old farm with passion and commitment while each of them also has another job. And both of them have this big love for the place they call home: Lech am Arlberg.

Besides being a mountain farmer, Wolfgang has been working as a ski guide for almost 30 years. Apart from being out in nature, it is meeting people from all over the world, each with their own history and character, that he loves most about this part of his life. “You get into really inspiring conversations that make you think about things you never would have come across if you always treaded the same old paths,” he explains. Julia still works as a lawyer for a German company. After commuting between Lech and Bavaria for some time, she now works from her home office in Lech.

Although both of them talk animatedly about their jobs it is clear to see that their true passion is farming. Wolfgang always knew that this was what he wanted to do. “I still went to a secondary school focussing on engineering because I wanted to have some education, but I always knew I wanted to be a farmer.” Wolfgang also feels committed to continuing the legacy of the generations before him. “I somehow felt like this was my calling, and I was happy to accept it.” For Julia, being a farmer was new but she has clearly grown into it. “I love the physical labour. I can’t even imagine going back to sitting in an office for eight hours. And because you can’t talk much when working in the stable, you get a lot of time to think.”

Julia and Wolfgang are convinced that local producers are vital to a small Alpine town like Lech. Not only for the things they make (local products are much coveted by tourists), but also for the community itself. “It is incredibly important for places like this that there are people who live here all year, who are involved, who identify with this place,” Wolfgang says. It also fosters interesting co-operations. The milk of the Huber’s grass-fed cows, for example, is used for making ice cream by Martin Walch, the local baker. Some of the milk is also sold to various local hotels.

So it might come as a surprise that producing milk and dairy products is not the main job of a mountain farmer, Wolfgang and Julia explain. “Up here in the mountains, landscape preservation is the most important aspect of our work.” This mostly means taking care of the meadows and mountain pastures. “While these things often go unseen, they are very important for tourism,” says Julia and adds, “We don’t have one single meadow that we can just mow with a machine. There is manual labour involved in almost everything we do.”

But Julia and Wolfgang are far from complaining. After all, Lech offers everything they need to live happy lives. “We spend our days in these beautiful surroundings and have jobs we can pour all of our passion and idealism into,” Julia tells us. Wolfgang never wanted to leave this place anyway, and even Julia can’t imagine living somewhere else now. In her heart, she feels like a local. And that’s a good thing. Because for a place like Lech, people like Julia and Wolfgang are more important than corny big-screen love stories.