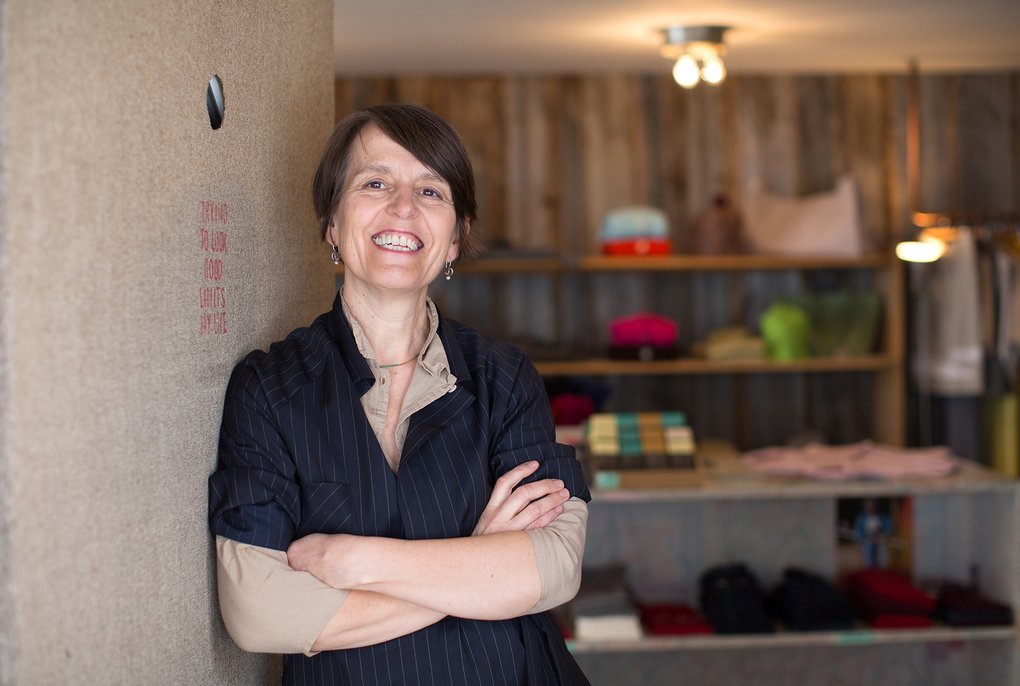 In the heart of Lech there is a little shop. It is called Lenai & Linai. Dresses, bags, jackets of the current collection pose in its big shop window as if they were fashion models themselves. On the entrance door with its felt lining it says, “Trying to look good limits my life.” It’s a quote by Stefan Sagmeister, the famous New York-based graphic designer who was born and raised in Bregenz, the capital town of Austria’s westernmost province of Vorarlberg, about an hour from Lech. When getting to know Sonia Zimmerman, the owner of the shop, you soon realise that for her this is no tongue-in-cheek quote. Not because she seems as if she didn’t care about her looks – to the contrary! Her outfit, a pinstripe dress worn with black Chelsea boots, tells that she loves fashion and has fun experimenting with it. But for her it is not about looking a certain way but about choosing the clothes that make a person’s personality shine. “My designs are for people who know who they are, who have their own style and don’t have to rely on the power of brands,” Sonia Zimmermann explains. People who don’t strive to look good but to look who they are.

It all started with wool, I just have this thing for wool.

Her dresses, jackets, pullovers, skirts and accessories (bags, keyrings, covers for smartphones and laptops, hats and many more) are mostly made of all natural materials like broadcloth, felt, loden and wool. “Sometimes I also use pure polyester, silk, cotton or velvet. It all started with wool, I just have this thing for wool.” It all started when 5-year-old Sonia Zimmermann got knitting needles and wool for her birthday. “I have always been fascinated what can be made with wool. It’s just yarn but you can turn it into fabric, make patterns, whatever you fancy. I think that’s fantastic,” she says. Almost all of the fabrics she uses originate in Austria, the clothes and accessories are made in Vorarlberg.  Looking around in the store it’s also the many colours of the knitted jumpers, jackets, bags that catch your eye. “I really care about colours,” says Sonia Zimmermann, “I just love combining them.” The same applies to different kind of fabrics, making her creations unique and surprising. She herself calls them timeless, ageless, often inspired by something subconscious. “My designs actually reflect my childhood. Walking through my parents’ house I looked at the photos on the walls and realised, ‘The things people are wearing in these pictures are the same as the ones hanging in my shop!’ But it took me quite some time to figure that out.”

Nature is her inspiration.

And like any creative mind, Sonia Zimmermann is constantly working on new ideas. She explains it like this, “It’s not just fashion I make. When you’re creating new things you always also create something like a new life or a new world and you work on that constantly.” Nature is her inspiration; she calls her works „fashion from the mountains“. „But of course you can also wear them in the city,“ she adds. A few houses up the hill, where she lives and works, these ideas come to life. It is an old barn that has been turned into a house with a striking oxidised copper façade. On the upper floor is the studio, the empire of a thousand fabrics and balls of wool. “I tidied it all up especially for you but it still looks all messy,” she apologises. To me, however, it does not look messy at all. I actually like it, maybe because it reminds me of my mother and her little sewing room, as we called it, and that one looked much more chaotic. Here, in Sonia Zimmermann’s attic, the fabrics are organised in milky-white plastic boxes stacked on top of each other. This is where she sketches and tailors, observed by the great Austrian writer Thomas Bernhard who looks down from a poster on an orange wall separating the workspace from the bathroom.

Sonia Zimmermann is definitely one of the people who really don’t like to be photographed. She still let’s us take a few pictures of her sitting in the shop window, looking out on the village. Verena, one of her employees enters the shop. “You sitting there looked really cool,” she says. Besides Verena, the Lenai & Linai team consists of three knitters and a seamstress. This year, the label – and the shop in Lech – will turn 18. The name was inspired by a set of two sisters from Salzburg. “They lived in the mountains, spent all their lives together. Somehow their story touched me,” Sonia recounts. The plan was to open the shop together with a friend but it did not work out in the end. Before starting her own fashion line, Sonia sold silk flower arrangements for seven years, and before that, she trained to become an advertising designer in Vienna. She has, however, never done any professional training in the field of fashion. “It all seems totally crazy in hindsight,” she says, “I just jumped in at the deep end, completely overestimating myself. I thought everyone was just waiting for my creation, and of course that wasn’t the case at all. So this story you are about to write about me won’t be your classical success story. It was difficult from the very beginning and that has never really changed up until today,” she says and laughs, immediately taking the sting out of her statement. “Well, I can clearly see a success story here,” I answer, “after all, you’re doing what you have always wanted to do.” I will probably never know whether she agrees just to put the matter to rest or because she found my argument convincing.

Whining is stupid. I should either do something or just forget about it.

She pauses for a moment before adding, “I actually only wanted to say positive things but now I’m whining again. ‚Jömmera isch blöd. I sött eappas tua, odr ’s vergeassa’ -  ‘Whining is stupid. I should either do something or just forget about it.’ That’s another quote I put on my door,” she says. It sounds familiar to me and then I realise why. It’s another quote by Stefan Sagmeister, presented in handwriting on a wall at his Happy Show which I saw at the Museum of Applied Arts in Vienna. Whining is only stupid if it never leads to any action, I think to myself, because sometimes it’s just the right motivation to get things going, to translate them from your inside into the outside world. “Don’t be so hard on yourself,” I’d like to tell Sonja Zimmermann but I don’t have the guts to do it. And looking back that’s ok. Sonia Zimmermann has found her place in life already anyway.