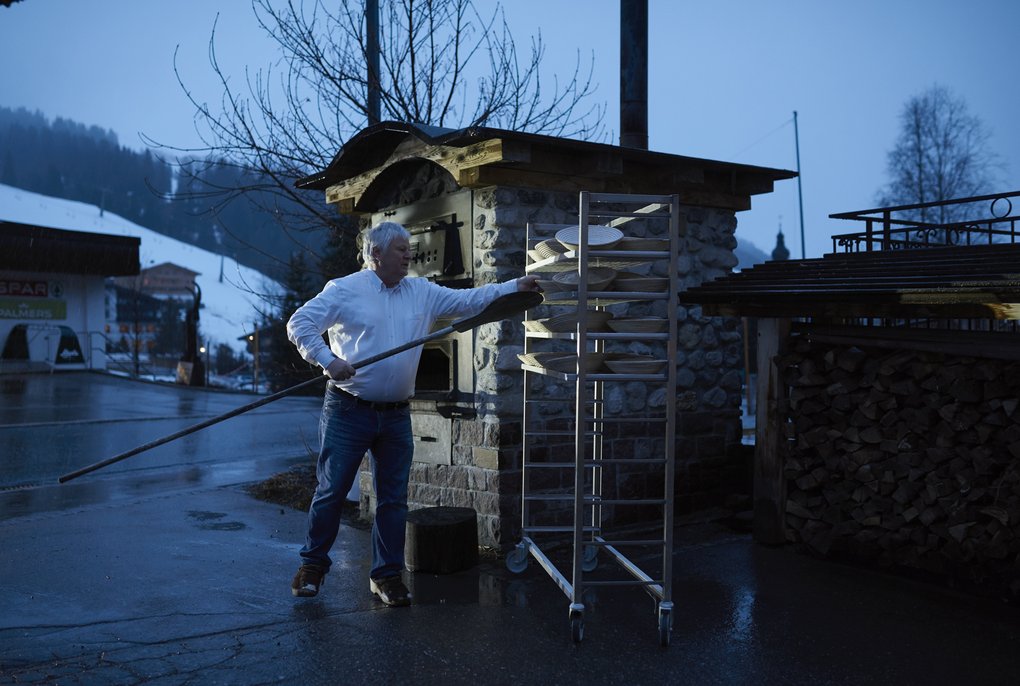 Bread made by Clemens Walch in Lech Zürs tastes differently. Not only because of its all-natural ingredients, but also because it carries some of the place’s typical DNA, bringing out perseverance and poise in its people. The baker – who’s also a hotelier - shares this DNA as well, and that’s probably why he likes a big project. In his bakery, Clemens Walch talks about why fighting for something is worth the effort even it takes decades to turn a vision into reality.

6 a.m. in the Lech Zürs bakery. Upbeat house music on the radio. Good-looking guys and girls knead and form dough, some of them exposing tattoos on their upper arms. But this is not Portland, Oregon, or Williamsburg. It’s Lech Zürs, where baking real bread has been on vogue for 30 years. A typical day in baker Clemens Walch’s life. Not that he chose this profession; his parents did - to keep the business and the family’s heritage alive. It all began with grandmother Filomena Walch, who founded Haus Gotthard with its bakery, a café, 8 guest rooms and a small general store. This was the young, enterprising widow’s way to raise her four children on her own. “Bread never goes stale, you can always still eat it when it’s hard”, she said. Her vision was the foundation of everything that Clemens Walch now calls his heritage. Handing it over to his nephew one day in an even better condition, that’s what’s part of his mission. And word about this mission has even spread all the way to New York.

Clemens’ path through life seems to have been predetermined, but his authentic excitement for and vast knowledge about baking bread prove that passion for something really does come with doing it. He has always been interested in new developments in the field, carrying his grandma’s vision even further. Very early on he recognized the trend towards using natural and local baking ingredients, and when he took over the bakery from his father, he replaced the bread roll machine by hand-kneading and convection ovens, and industrial bread improvers by his own special sourdough (“tried and tested for a thousand years”). Of course he also mixes his own flour. For Clemens Walch, it’s not about producing large quantities. It is about maintaining the best possible standard for his location. This takes time, for true quality needs to blossom and cannot be produced by a machine at the push of a button. At his bakery, dough is produced a day in advance so that there is enough time for the desired enzymatic reaction, a chemical process that makes grains much more digestible – and delicious, explains Clemens Walch.
Then he takes us outside, to the pre-heated wood fired oven, and puts in the loaves of bread pre-ordered for that day. “In fact, all you need is water, flour and time.” In a few hours, a wonderful, subtle scent of fresh bread will fill the air.

Born and bred in Lech

So many things take time to reach their full potential – people in Lech Zürs know that, including Clemens Walch. This knowledge is vital for his daily life, for he wears many hats: Together with his Australian-born wife Nicole, he runs the hotel he took over from his brother-in-law, and until recently he also was the active chairman of the Lech Zürs tourist board. But, first and foremost, he is one thing: A guy born-and-bred in Lech, confident and deeply rooted in his hometown. These qualities are very useful when it comes to mastering the ups and downs of a life in the mountains, like ten years ago, when, after unprecedented rainfall, torrents and mudslides flooded their newly renovated hotel and the bakery. It was almost the end of this family’s long history in the village. But being born-and-bred in Lech for generations also means believing in and holding on to the things close to your heart. And sometimes it also means fighting for something until even the last, most bullheaded farmer gives in and later even approves of, say, the new golf facility that will open in 2016 in Lech Zürs. For 20 years, Clemens Walch did not give up on this project, negotiated with farmers over land, promoted the idea, convinced people that such a facility would attract high-quality tourism in the summer months and secure sustainable occupancy rates in the region far into the future, when the winters might look differently in the Alps. Clemens Walch is kind-hearted, but he sticks to his values. And if he can no longer stick to them, he is also able to admit that.
But what inspires him and gives him the persistency to follow through? “When you are up so early, all on your own in the bakery, there is a lot of time for thinking.”

“Making the best of what you have”

Progressive thinking is a common trait in Lech Zürs, and it is not surprising considering the fact that the luxury ski resort was nothing more than a little village 120 years ago before tourism started in the region and changed everything. “People were poor,” Clemens Walch tells us about his ancestors, the Walser people, “they learned to make the best of what they had.” No wonder you can still find this quality in the village’s DNA today, bearing more fruit than ever, one of them, for example, being the local union “vo:dô” (from here) for the marketing of products like honey and milk from Lech Zürs.
“I constantly try to improve things,” says Clemens Walch who uses an all-natural salt solution (brine) instead of sodium chloride for his bread, something he started after visiting the Richemont Centre of Excellence for bakery and confectionary in Luzern where a colleague pointed out that there must be a better match to his DNA and heritage than Himalayan salt, which he had used up to this point. And then, as chance would have it, he met a friend while skiing and told him about his experiments with natural brine. His friend immediately liked the idea and put him in touch with Hannes Androsch, Austria’s main player in the salt mining industry. The test runs with the new brine were so successful that several colleagues have already adopted his method, and even a renowned author of baking books in New York heard and approved of it. Moreover, Clemens Walch uses stone-revitalised water from Hallein, Salzburg: “Well, I guess that’s something you have to believe in.”

People in Lech Zürs love the place they call home, and they feel a strong loyalty towards it. “There have been times when we wondered if we would be happier with a fresh start in a different place,” says Clemens Walch honestly, but they have turned down several offers to sell the business: “We always came to the conclusion that that’s not what we want.”
The family is rooted so deeply in the village community that has often come to the aid of the Walch family when time or nature has put their commitment to the test. When both bakery and hotel were buried by rubble and mud in the landslide ten years ago, everyone, including some guests, joined forces to get both places back up and running in no time.
In the mountains you simply have to live with nature. They also keep Clemens Walch grounded: He often retreats to his cabin to play the accordion, and it is also the place where he hangs his bacon to mature and distils his own rowan schnapps. “You know, we people up here, we are also lone fighters,” he says and smiles, “you can only live what you truly are.”
But if you know Clemens Walch, you will also know that he aims at so much more than just his own good. His wife Nicole is with him on this journey. Because it is true also in Lech Zürs: Behind every strong man there is a strong woman...but that is a different story.