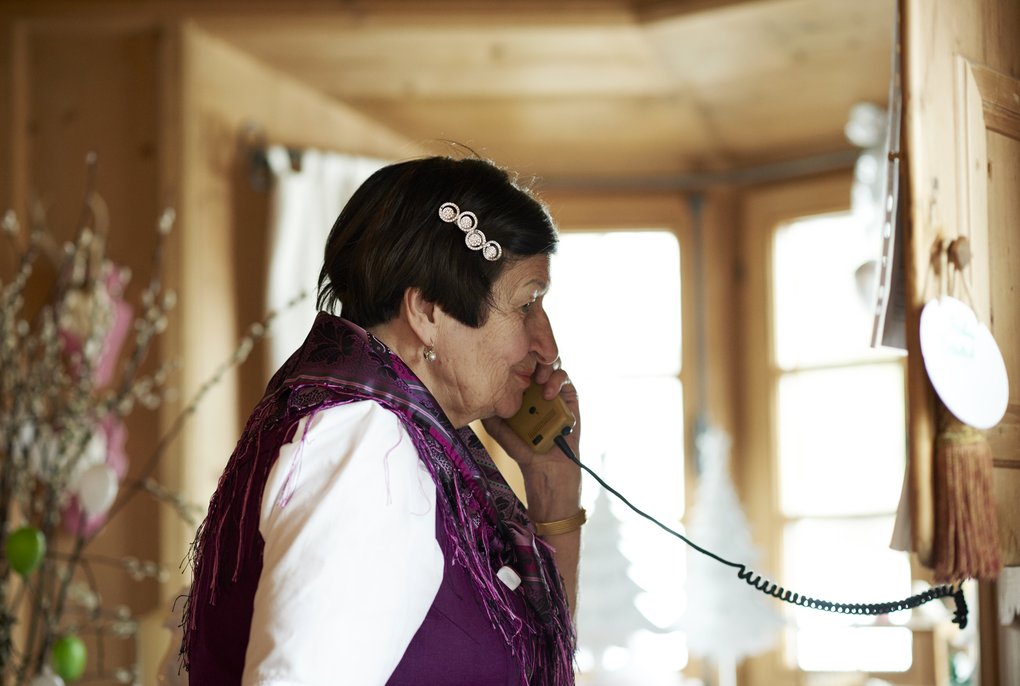 The Strolz sport and fashion store in Lech Zürs in the Austrian province of Vorarlberg is one of the world’s top stores. Due in no small part to Herta Strolz, the lady of the house, who has been serving her customers for 60 years, with a commitment that she stills lives and breathes every day. Among her customers have been faithful regulars as well as seasonal guests and even monarchs. When she says she knows everyone, it’s definitely not just a phrase. However, the company’s success didn’t come overnight: together with her husband Ulrich, Herta Strolz has gradually built up an international reputation for her family business – always trusting her gut instincts and taking risks when necessary.

“I’ll be with you in a second!” we hear an upbeat female voice from the back. Curious and a bit intimidated, we are waiting to meet Herta Strolz in her elegant home, where modern architecture and tradition come together in one harmonious interior design. There is a pile of black hats on the cabinet in the hall and quite a few pairs of black patent-leather shoes underneath. They clearly show Mrs. Strolz’ personal sense of style. After all, it was no coincidence she added luxury brands like Bogner, Fusalp and Hermès to her product range, bringing a good deal of “joie de vivre” to the skiing paradise of Lech. “Alright, here I am. Hi everyone!” Meeting Herta Strolz for the first time, it is her contagious laughter that strikes you. And of course that unbridled love for life that is pouring out of her. Even at 80 years old we can see the bright and cheerful young Tyrolean girl in her that came to Lech so many years ago.

Her cosy living room is decorated with china and beautiful handmade things showing just how much love for detail she puts into everything she does. She starts telling us how happy she was to receive the Best of the Alps award honouring her family for their contributions to the economy and society of Lech Zürs. She will soon present the award in a window in their store. She is thankful for this appreciation. But people appreciate Mrs. Strolz also for other reasons, such as her commitment to Austrian folk music and her delicious Apfelstrudel (apple strudel). “You need to put something in, to get something out,” she says in her charming Tyrolean accent. And that is probably the principle she has always lived by.

No risk, no nothing

Let’s go back to the year 1950: Lech Zürs had a population of no more than 680 and Lech’s winter tourism was still in its beginnings. Herta Strolz arrived in an autobus from Mieming, a small town in Tyrol. “The road connecting Zürs and Lech was just a simple gravel road,” she recalls. She worked as a waitress in the posh Hotel Gasthof Post for a while, before she was hired by Ambros Strolz, her future father in law, who ran a sports shop at that time and had noticed her diligence and esprit. A shoemaker himself, he founded his company in 1921 and had always been known for his innovative mind: He invented his famous ski boots that were custom-made for professional skiing teams worldwide. His son Martin wore them in the World Championship in Åre, Sweden, in 1954, where he finished second in the downhill ranking.

Herta quickly worked her way up to become Strolz’ best salesperson. Apparently, Ambros’ son Ulrich was very impressed by this determined young lady and soon asked her to marry him – in the car on their way back from a fitting.
But before they got married in 1957, Herta, the forward-thinking young lady she was, decided to take a short break, because she knew her new life would come with a lot of duties and commitments. She decided to attend a shop window and décor class at one of Munich’s most renowned schools and study French in Paris. “If I marry into that family, I need to acquire certain skills first, that’s for sure.”
She also spent two summers with her mother at her family’s restaurant, learning how to cook. After all, her new family didn’t only run a shop, but also owned a guesthouse. And then there were her parents in law: “We shared a table for about 30 years. That’s the way people lived back then.” She looks at her wedding ring – the only piece of jewellery she wears. Before they finally got married, Herta recalls, she stuck that ring into her fiancé’s face, making very clear how she saw their future: “I’m telling you: I am going to take this ring to the grave with me.” In the years to follow, they had three sons: Ambros Junior, Florian and Daniel.

The young Strolz couple turned out to be a great team. But their days were long: „After a day in the store I took my apron and started cooking for our guests. And when I was finished, I took off my apron and asked them if they were happy with everything. Then I went back to the store and to my husband and did the purchasing. We hardly ever went to bed before 2 am,” she recalls and pauses, still wearing that smile on her face. Maybe that’s her way of saying that her life hasn’t always been a walk in the park. However, Herta Strolz is not someone who likes to complain. Quite the opposite: she always shows this sparkling wit and charm, no matter what. And that has probably helped her to always get what she wanted. For example when it came to choosing the colours for their collections. One day, when Ulrich Strolz had chosen the same old dark ski trousers and pullovers for the upcoming season, his wife asked him: “… but are you dressing a funeral party?” He immediately handed over the purchasing to his wife. That was a courageous step and a big challenge for young Herta Strolz, but she kept trusting her intuition and her exquisite taste. “That same season I went to Bogner, because they just had the most beautiful colours and great anoraks,” she proudly recalls.

Herta has always had the courage to take risks, as well as great negotiating skills. „I told our suppliers: get me some nice colours, because the snow is white and will always stay white. Skiers must look good when they are standing in the snow.“ She was also the first to offer overalls. The fact that they became the next big thing proved her fine sense of fashion and trends. “The guests in Lech were already very fashion-conscious and knew what they wanted,” Herta says about the then 300,000 winter tourists that had started to appreciate Lech for its elegant atmosphere. Over the following decades, the number of guests doubled thanks to Austria’s booming winter tourism.

Go to bed already, we won’t balance the books before Easter

Herta Strolz also recalls that some of her decisions caused her sleepless nights: “When there was still no snow in December and our stocks were full, I had a hard time sleeping, because there was a lot of responsibility on my shoulders. But of course you can’t tell anyone.” Those were the moments when Ulrich stood by her side as a wise partner. “’Woman, go to bed already,’ my husband used to say to me, ‘It’s not changing anything. We won’t balance the books before Easter.’”

Herta Strolz is a born fighter. She developed the business skills she needed all by herself. She took trains and rental cars to go to all sports and fashion tradeshows there were. She bought the smallest little things in the fanciest shops in Paris, just to see how the products were packed. And she studied the art of window decoration. „I always thought: One day I want to have a beautiful store like this,“ she excitedly recalls, and we understand how big this dream must have been. In the end, it became reality. Back to Lech Zürs, she took all of these impressions and experiences and used them to improve their store. And she always found ways to find new inspiration: “When I saw some elegant women in the fitting room, I checked the labels on their clothes,” she says smilingly. That way she kept adding new designers to her collections.

About exclusiveness, a wide clientele and close friendships

Unalterable like the colour of the snow is Herta Strolz’ commitment to exclusiveness. For example in the case of Hermès scarves: It was Herta’s persistence that made their store one of the first sports retailers to offer the sought-after pieces. Of course, they were considered rather expensive in a small town like Lech, but “I never gave up on my high standards.” An attitude that has contributed to Strolz’ success to this day. When it comes to honesty, Mrs. Strolz doesn’t settle with compromises either. And her customers appreciate her honesty – among them members of monarchies from around the globe – from Belgium to Jordan, Morocco and Japan. She has met up to four generations of their families. “These relations are like friendships. They can develop only if you stay true to yourself.” Keeping one’s feet on the ground is very important in this business. What keeps Herta down to earth, is her family.

The future is ahead

Today, Lech Zürs has a population of 1,500 and about 800,000 overnight stays per season. Ambros Strolz Junior manages the store’s operations. The building was reconstructed and a new bar was added, where you can meet a cross-section of Lech’s mixed audience: skiing instructors, locals, guests from far away. Strolz also opened two new branches. While Herta still insists on maintaining her high standards, she also wants her family’s business to grow. “As a person, you are growing with your company. I married into this family at age 22 and I never stopped growing.” Making room and time to grow – that’s a philosphy the Strolz family shares with their home town of Lech Zürs.

Always keep your feet on the ground!

Asking Mrs. Strolz about appreciation and gratefulness, she tells us how thankful she is to all their guests, who „added so many bricks to this house“, as she puts it. And she gets a little more serious when she stresses: „You don’t inherit wealth to spend it, but to maintain it.“
Mrs. Strolz will probably never fully retire. She is still in the store every day, between 2 pm and 5 pm, where her customers still love to meet her. “And now, to celebrate our meeting – we should have a drink together,” she says cheerfully.