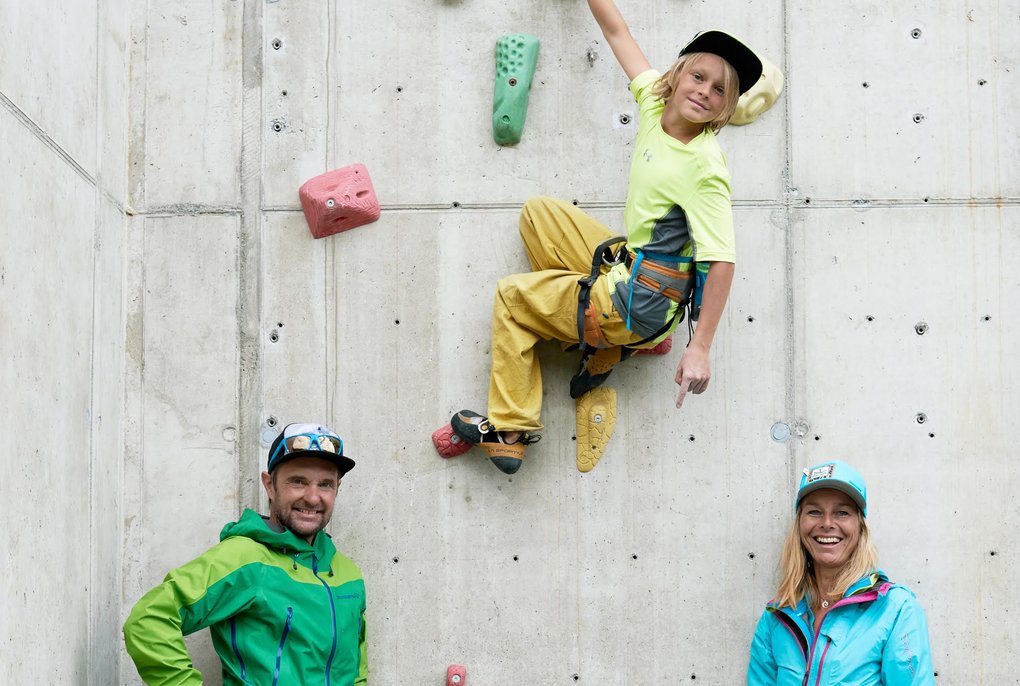 The Tatschls from St. Anton are one cool family. Their enthusiasm for sport is just as infectious as the serenity they exude as a family. What’s their secret? A lot of it has to do with the passion of their 11-year-old son, Moritz, who is an avid climber. On a Sunday afternoon, at the foot of the climbing wall, they share what welds them together as a family.

Moritz Tatschl hangs in the wall as we arrive at the arl.rock sport park in St. Anton am Arlberg. His parents, Meinhard and Manuela, are on duty belaying him. Both effort- and fearlessly, Moritz climbs the 7b route, one of the higher grades, on the 19 metre climbing wall.

With his friendly nature and relaxed smile, the blond-haired, blue-eyed boy clearly comes after his parents. You can feel immediately how at ease they are with each other. Mutual trust is key – a beautiful side effect of Moritz’ passion for climbing. It even extends to their dog Ari: Completely relaxed, knowing about the Tatschl’s Sunday routine, he stretches his legs, squinting in the bright sun.
Although the parents support their son as much as they can, they know it is only a fine line between encouragement and putting pressure on somebody. “We are constantly refining our approach when it comes to Moritz’ climbing. How do you react as a parent when you realise your kid is enthusiastic about – and talented for – something like this?”

The reason why it all started, however, is different than you might think. Already back when Moritz was a baby, he turned out to be a little more ambitious than his peers: “As soon as he had figured out how to sit he started standing up, completely omitting the crawling stage,” remembers Manuela. But babies are supposed to crawl, their paediatrician at the time explained, because through crawling they form the synaptic connections necessary for left-to-right and arm-to-leg coordination. Following the doctor’s recommendation, Moritz’ parents playfully introduced him to climbing to make up for this developmental stage, and he soon discovered his love for it.

Confidence does not grow by itself

Young Moritz not only impresses with his climbing skills, but also with the clarity in which he talks about rather complex matters. Although – or maybe because – he, as an 11-year-old, lacks life experience, he has this unadulterated perception of himself and others, leaving him so at ease and open-minded. Features that are hard to regain as an adult.
“Moritz is very considerate. He would never do anything beyond his control and he knows his limits very well,” says Manuela. “That’s very reassuring for me as his mother. I know he only does what’s safe for him. He has the right instincts.”
Still, she confesses, it is a balancing act that many mothers and other adults know – letting go yet providing that feeling of safety.

Moritz also gains a lot of confidence from the competitions. “They grow so much along the way, it is such a cognitive boost,” says Manuela Tatschl. Recently, Moritz finished third in the Austrian U12 climbing championship. And as Moritz grows, so do Meinhard and Manuela. “Our role as parents also changes. We often reach a point where we can no longer help Moritz or tell him what to do because he knows more about the sport than we do. That brings a temporary shift in our family hierarchy and you have to accept when you’re being told, sorry Mum, but you just don’t have anything useful to add to this conversation,” chuckles Manuela. “After all, that’s the way it is.”

Nature as a second living room

Meinhard, Moritz’ father, an enthusiastic biker and the coach of choice of Olympic skiing champion Anna Fenninger, has always dreamed of living in St. Anton. He moved here with his family twelve years ago and enjoys spending time here, though there is not a lot of it: As a coach he travels on about 200 days of the year.
So it is mostly Manuela Tatschl who plays the active part in supporting Moritz’ passion for climbing – and the promotion of young talent in St. Anton. “Together with the Austrian Alpine Association’s branch in Landeck we founded a climbing team that now consists of 50 young climbers from amateurs to professional competitors.” This also fosters interesting friendships with other families and their climbing children.
“We really like it here. There are so many different people in St. Anton,” says Manuela Tatschl, “We have a very international circle of friends.”

Nature is like a “second living room” for the Tatschl family. “Although my husband does not climb himself and I am only an amateur, we all like this sport and find it to strengthen us as a family. Moritz is our leader in this respect; we need him and he needs us.”
In their time off, the Tatschls like to explore the various climbing crags around St. Anton. It is a beautiful way of “experiencing nature and our family from a new perspective,” explains Manuela Tatschl. “We bring our dog and some snacks and spend all day outside. There’s something in it for each of us.”

Are you competitive by nature?

I think so. After all, there’s something at stake.

Confidence does not grow by itself. Trusting myself is something I have learned.

To get up there as fast as I can without taking a break.

Because you feel like the first person to climb up there. As the second, the rope’s already there for you.