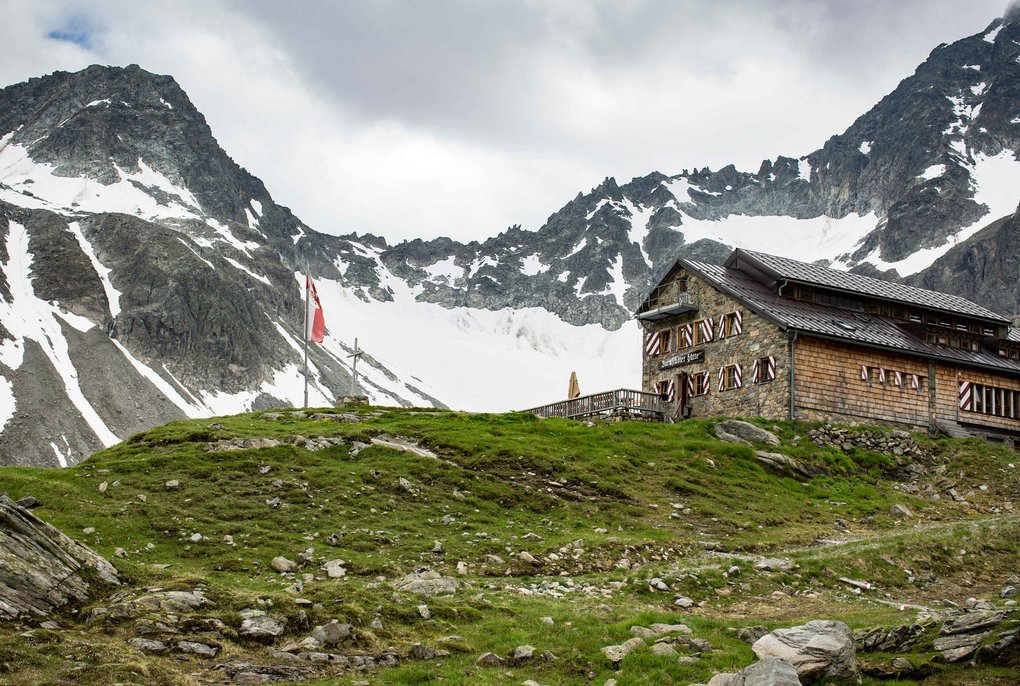 He stands amidst the hustle and bustle of the busy dining room of Darmstädter Hütte, a mountain hut high above St. Anton am Arlberg. Andreas Weisskopf smiles. He’s got it all covered, in and around the hut at 2,385 metres above sea level. Although he has only rented the place, it feels like his own. After all, he represents the third generation of his family to run it – with all his heart’s blood and all his energy.

Climbers and hikers flock in as soon as the weather allows it, using the place as a starting point for their tours and excursions. And then there are the bikers, most of whom make sure to have an external supply of energy with them when they venture out on the challenging route up from the valley: E-bikes for the win!

Today we will seize the opportunity to try them out as well. Riding an e-bike feels a little weird in the beginning – or is this what the beginning of an adventure feels like? The invisible energy that suddenly pushes us ahead is surprising – and fun. “E-bikes are for lazy old people,” we had boasted only moments before, but now we speed up the hill, excited like little children. An elevation gain of 1,114 metres awaits us on the two-hour ride to our destination, the Darmstädter Hütte mountain hut, and we decide to scale back the power and add a little elbow grease instead. We don’t want to end up with an empty battery half-way through our ride. A gravel road leads up the first steep hill. Then there is a rather even section, taking us further into the impressive cirque. At lake Kartellsee we meet more bikers, some of which are battling the route without electric support. It is tough, not many master it on their own. We, on our part, backpedal from our jokes on e-bikes being for lazy old people and gratefully make use of our batteries. After all, we are on our way to meet Andreas Weisskopf.

THANK YOU FOR HAVING BECOME NICER

Andreas Weisskopf, the innkeeper, watches on as we arrive at the hut – effortless, at full speed. “When you’re sitting upright on your bike when you get here, you definitely came on an e-bike,” he jokes as he greets us. Five times as many bikers come to the hut since the new technology helps them to get there. Andreas thinks e-bikes are great. They open up new possibilities for motivated sports enthusiasts: After riding up the mountain, they now still have energy left for climbing or hiking. That’s exactly why most guests come to Darmstädter Hütte. After setting up camp at the hut, which has been expanded carefully several times, they venture out into the area. In recent years, most guests have been rather young and not too discerning – a development that is appreciated by the innkeeper. “Thank you for having become nicer,” he said to a group the other day, he tells us, laughingly. “In the past I was the mean innkeeper when a camping mat was all I had left for unannounced guests. Today they happily accept sleeping under the table in the public room.”

Andreas Weisskopf has known this place for a very long time. Already as a child he watched his father work here, and he knew early on that he wanted to follow in his footsteps. There is a lot of emotion in his words when he tells us about his summers in the mountains. From the end of June, when he removes the last snow from the road on the way up, until September he stays at the hut. This is where he feels at home. Where he misses nothing. He runs this place. He welcomes guests, has a few nice words for everyone, and then disappears back into the kitchen.

To further their self-sustainability, the Weisskopf family has built their own hydroelectric power station on the creek nearby. “It’s just a little wheel, about 30 centimetres in diameter. Looks like a toy but powers this whole place,” Andreas raves. The drinking water comes from the nearby mountains and, just like the hut’s sewage, is purified in-house. A spare minute? There’s not one for Andreas Weisskopf all summer. Even in bad weather there are guests around and there is always something to do. Given the amount of energy Andreas Weisskopf has to burn, that is a really good thing.