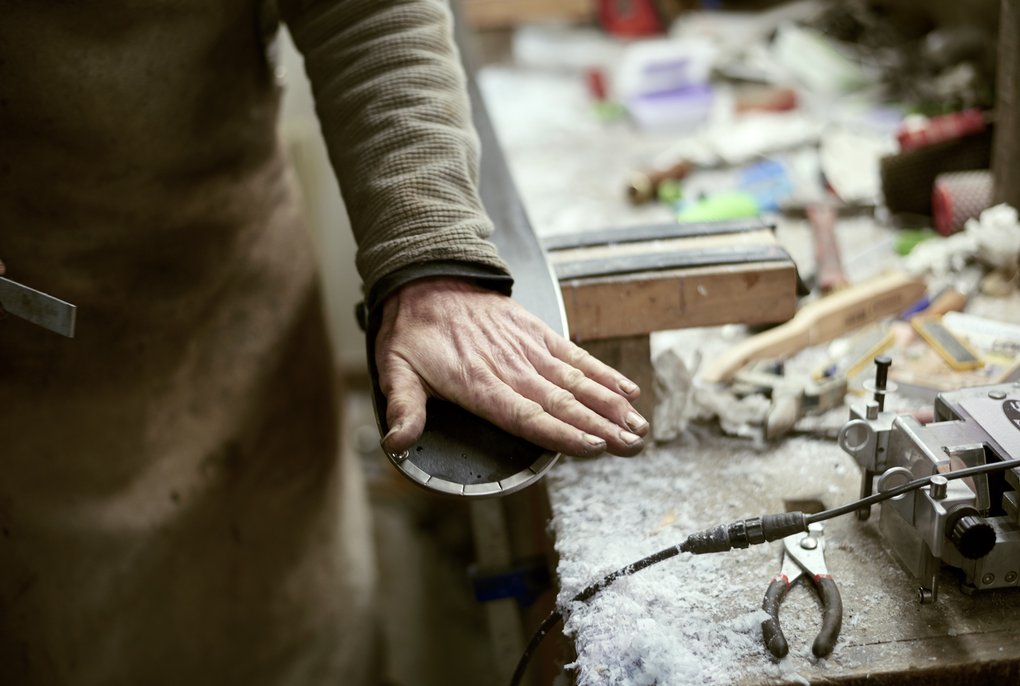 While most of us gravitate towards cities to optimize our potential in life, Peter Steltzner decided to go the other way. He moved to Chamonix that has become a mecca for mountain climbers and free riders.
His passion for the mountains turned him from a highly skilled furniture maker in Paris into a craftsman of alpine luxury skis. The entrepreneur set up shop in a 17th century sawmill to produce state of the art handcrafted skis. But living this sort of dream entails challenges that lie a little bit out of the ordinary, says the charismatic native Californian in his formidable workshop.

Upon entering the non-descript one-storey building just off Route des Praz, a glance around the room has your mind blown by an array of beautifully crafted wooden skis neatly lined up against the wall. Each has his signature logo, a rabbit on skis, embossed on the plaque - therein lies a gentle touch of irony that sets the tone for a competitive business, where big players like Rossignol and popular independent brands like the Black Crows, are heading up the market.
Clad in warm layers of fleece, Peter is sanding down a pair of ‘mountain tools’, as he calls them. Our iPhone weather app shows zero degrees and the little heater underneath the joiner’s bench is not nearly powerful enough to heat the old building. It sits on an old river bed that used to flow just underneath it and power the former sawmill. In freezing temperatures Steltzner toils away and displays an enviable sense of conviction that is driven by passion.

Here I can go skiing, hiking, climbing and then go back to work for a few hours later in the evening.

The property was love at first sight. “I didn’t even get from the door to here when I was in here for the first time and said to myself ‘I can do this’,” he says. In just a few months he was relocating his entire workshop from Paris with a few trucks. That was five years ago and he’s never looked back, appreciating the pleasure of being a master of his own time and craft away from the stresses of city life. “Here I can go skiing, hiking, climbing and then go back to work for a few hours later in the evening.” Most out of all he likes the prevailing upbeat mood in Chamonix. “Everyone is in good spirits,” he says, especially when coming off the mountain.

If we create things that have soul in it, we go beyond the concept of consuming something.

Craftmanship, attitude and a little bit of magic

If choosing your lifestyle to accommodate your passion can be seen as a form of luxury, it is reflected beautifully in Peter Steltzner’s magnificent wooden skies. “I think people are intrigued by the idea of taking traditional materials and using them in a modern way,” says Peter Steltzner. “If we create things that have soul in it, we go beyond the concept of consuming something.” His carefully worded philosophy, probably another remnant of his life in the bohemian Parisian suburb Montreuil, matches that of his products. For him creating an emotional tie with the object is important.
Reflecting on his recent exhibition at the Palais the Tokyo in Paris, he says it’s satisfying to see that their skies fit perfectly alongside Louis Vuitton designer travel cases. And it’s precisely this level of client that Peter Steltzner is catering to.
Just as we’re talking about his clients and their desires, a retired Polish doctor from the USA enters the shop. “It’s the best here,” he proclaims. “And this guy makes magic.” During the encounter it becomes apparent that as much as Steltzner appreciates his client’s passion for skiing, they appreciate his passion and craftsmanship.

Life in the mountains requires constant adaptation and that poses the true challenges for Peter Steltzner.
“It is an old building and there is always something breaking, but that is also the lifestyle of a craftsman that I have lived for many years. It is not an easy one but it is a pleasant one.” Even in the face of strong competition in the industry he is managing to expand slowly. “Making money from a ski building business is very difficult, so we feel very fortunate to be living from it,” says Steltzner.
One thing is certain about Peter Steltzner: He is not someone who is afraid of tapping into the excitement of the unknown. “It is a little bit like living on the edge,” and this is what keeps him going, as life in the Alps requires imagination. “If it were something that was very easy, where at the end of the month I would receive a fixed paycheck I would probably die of boredom.”

He came here because he had signed up for a different quality of life and to be closer to the mountains. Chamonix attracts passionate alpinists and mountain people from all over the world and he says he often gets asked what a Californian is doing in the Alps. His answer is simple: “Growing up close to Silicon Valley where your worth is directly related to your income is a mentality that I don’t believe has real value.”
When you see Peter Steltzner up at the Aiguille du midi with friends, ready to take his own pair of rabbits for a ride down the unbeaten track, it makes one realise that enduring a little bit of hardship to follow your dreams is well worth all the effort.