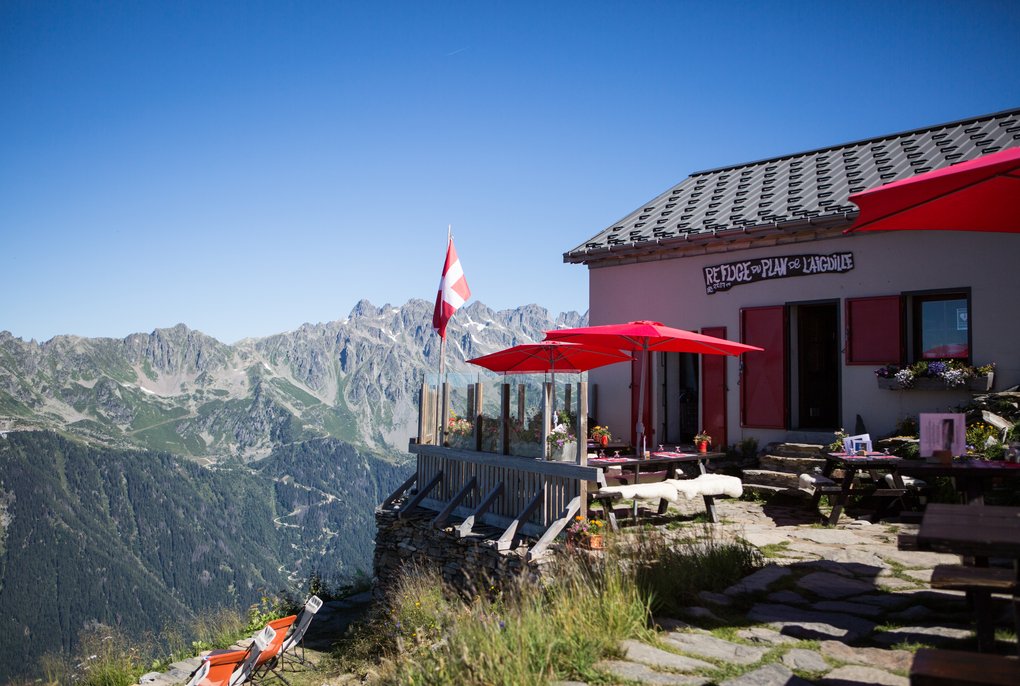 Claude’s cakes are something you must not miss, a user writes on travel website Tripadvisor, stating that they are the most famous in the Vallée. And a true super fuel for exhausted hikers, adds another user. Claude, that’s the guy who runs the mountain hut at Plan de l’Aguille, the cable car’s intermediate station. He has been baking cakes for decades, and in the last nine years, he did it here at 2,200 metres above sea level.

You can hear a soft echo when you stand up there at Mer de Glace, the sea of ice, the longest of France’s glaciers and a popular destination for hikers coming to Chamonix. You will hardly ever be on your own up here, but visitors disperse quickly in the area. Just take a few steps out into the rocky landscape, and you will hear nothing but the sound of your own steps, the birds screeching above your head and the glacier that is slowly shrinking: You can literally hear snowmelt trickling down the mountain.

We stop for a moment to take in the overwhelming panorama, to watch the birds, feel the rocks under our hiking shoes, drink some water and listen to the glacier melt. It is an afternoon in late summer. Just a few hours ago we had met with Claude, ate some cake and drank some wine. Turns out, we are not used to drinking at noon, and it really shows in combination with the sun that is blazing from the skies on this late summer afternoon as if it were still July.

Flashback to 11 am. We exit the cable car that had taken us up to the intermediate station from Chamonix within minutes and walk downhill for a few minutes, meeting a donkey on the way. It just stands there, unimpressed by our enthusiasm, looking at us and munching away. And that’s all that is expected from him and his buddy, we will hear later: They are just there to look pretty, says Claude who adopted them from his brother.

As we reach the hut, we are greeted by a cuddly fur ball: Boule, the one-year-old sheepdog that has nothing on his mind but eat and play. He just loves every single guest coming here and his welcomes are a little too enthusiastic, given he has already reached quite a respectable size. And while Boule is nothing but outgoing, his master, who runs the hut that sleeps up to 40 people, prefers to stay in the background. For nine years he has been living up here at 2,207 metres above sea level, supported by Marie Noëlle, his business partner who is responsible for logistics and finances. “I have always dreamed of running such a hut,” Claude tells us, and now he just loves it up here. The crisp air, the view of the town down in the valley, “the stunning sunsets”. 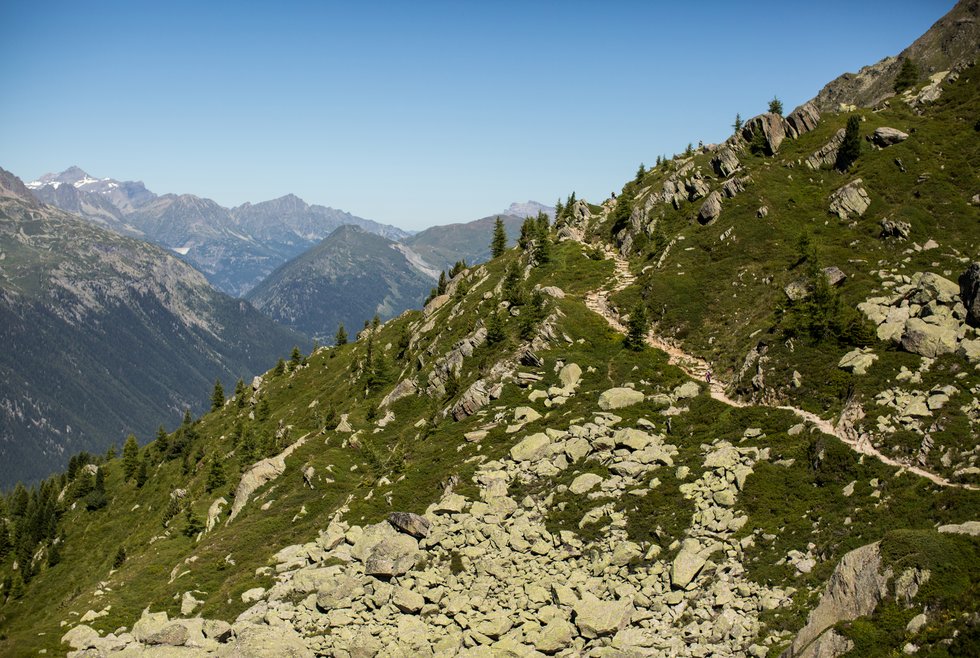 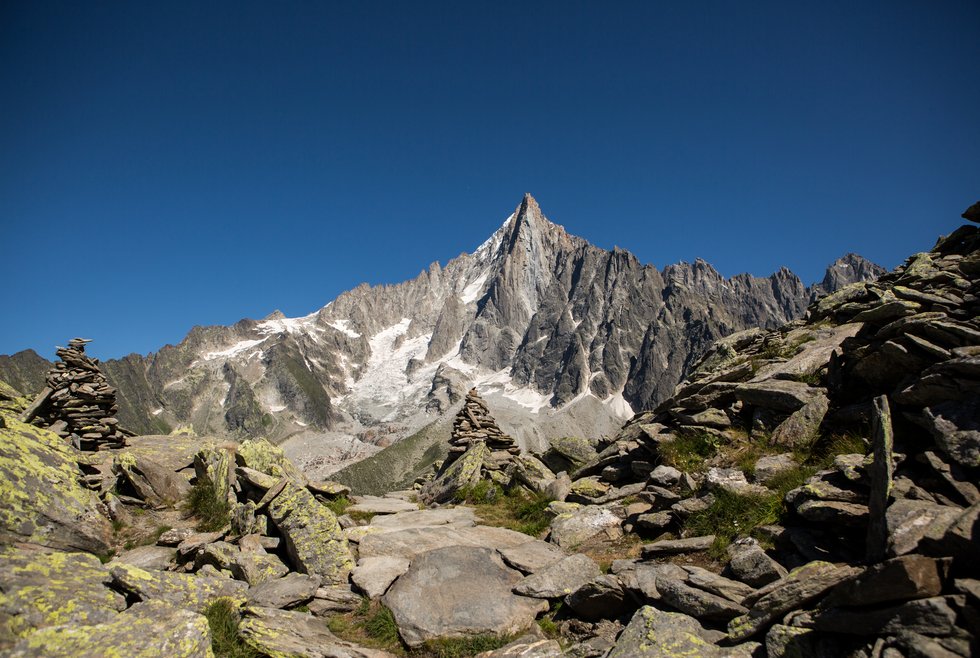 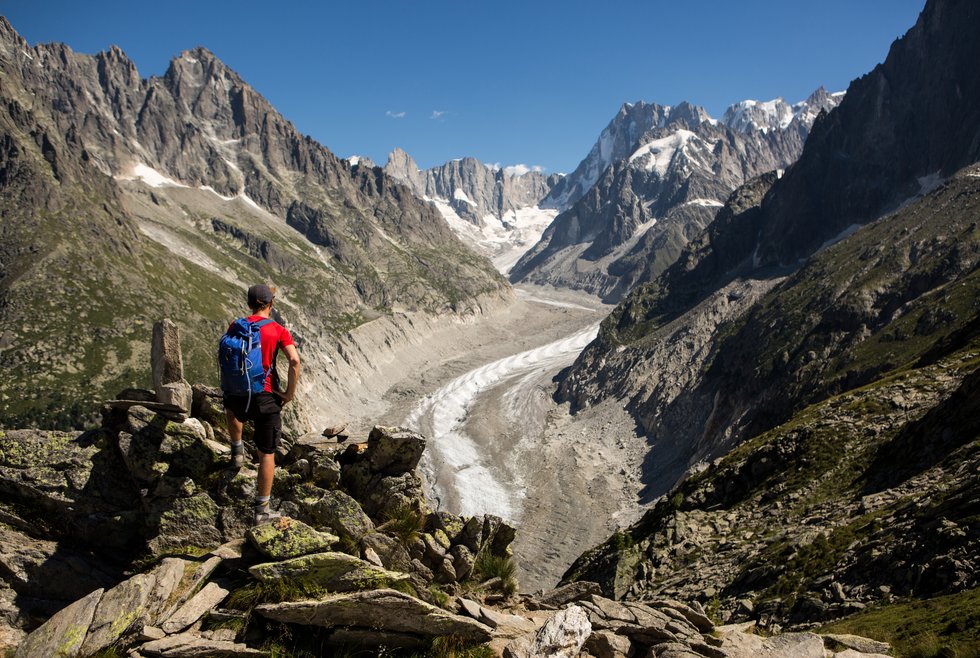 He also loves following his passion in the kitchen: Pastry. In a back room of the hut is a big table filled with all kinds of tarts topped with shiny apple wedges, soft yellow lemon cream or luscious blueberries, “a specialty of the region”, explains Claude who had been baking cakes “down in Chamonix” for 25 years until he realised one day that he no longer wanted to do that. Before taking over the hut, he worked about 1.5 kilometres as the crow flies up the hill at Refuge des Cosmiques, a refuge frequented mostly by mountaineers climbing Mont Blanc. That’s why Claude didn’t have to get used to the climatic conditions here at 2,200 metres. “I am used to this kind of height,” he says.

While sweet baked goods are definitely Claude’s specialty, he also offers other popular local dishes like lamb roast, polenta, and cheese. “My cuisine is traditional and very typical of the Savoy region,” he explains. Everything he needs up in the hut has to be brought in via helicopter and cable car. “And we have to be very economical with the water,” he adds, “we obtain it from the snow.”

Red and white are the dominant colours on the charming terraces in front of the hut, the colours of Haute-Savoie, the local department. We sit on white sheepskins; cherry-red umbrellas protect us, the dog and our wine from the sun. It is quiet all around, just a hint of the cable car’s buzzing sound in the background every now and then. “I like this silence,” says Claude, “especially at the beginning of the season everything is so quiet.” Although this does change in the main season, the stress is never the same as it is down in the valley. “People are just much more relaxed up here,” he says. Just like himself. “Be happy with what you have” is his motto, and you can sense that this humble, grateful mindset is real. And since he also shows great hospitality, he is just the perfect candidate for a job - and life - like this.

As we say goodbye to Claude, Marie Noëlle and their staff, and, of course, Boule after crowning our three-course menu with a blueberry cake, we still have a 2.5 hour-hike ahead of us. It will take three hours in the end, but that’s fine when you walk through a Mer de Glace where you can hear the ice melting. And where everything turns quiet as you take a few steps out into the rocky landscape.