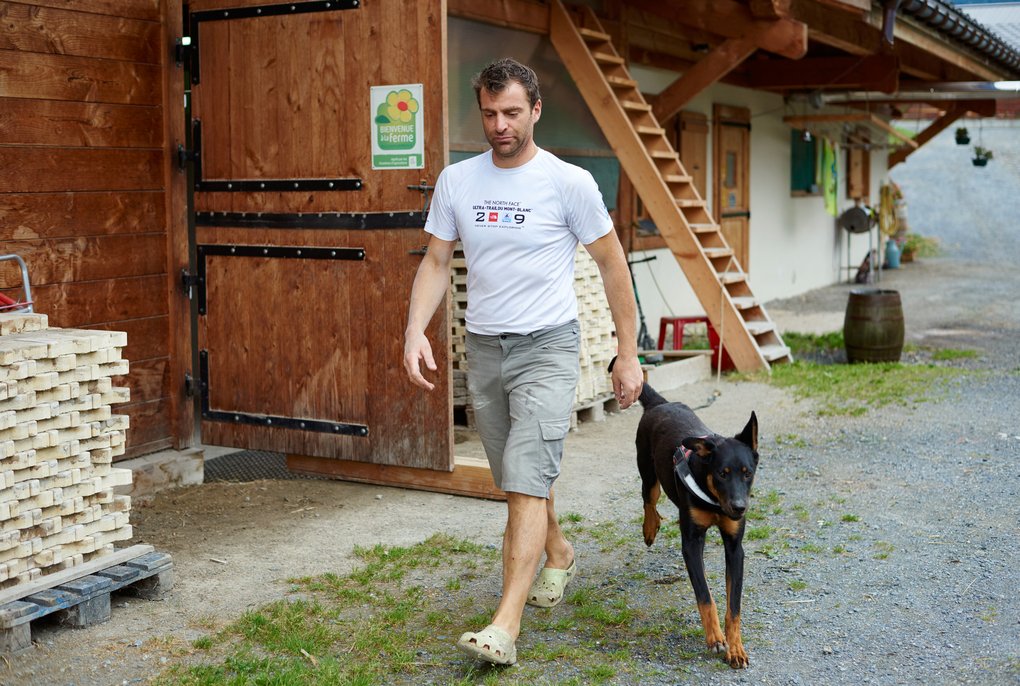 Moving into a barn in the countryside is the dream of many urbanites. Yet, some of us might balk at the idea of running a wheat farm in the French Alps. It takes a lot of commitment, long hours and a bit of luck to really sow the seeds. But what makes it worthwhile though, is reaping the rewards, which are just that much more satisfying once the effort has been committed.

Arriving at his new farmhouse in Les Houches, a short drive from Chamonix-Mont-Blanc and nestled between beautiful mountains and a waterfall, we find Mr. Berrux baking bread. He has been up all night, working his way through a 60 kg mountain of dough. Watching the fit 42-year old buzz around in his Ultra-Trail du Mont Blanc T-shirt (the famous 166 km marathon with a 9600 meters difference in elevation) it becomes obvious quickly that he is a driven man.
With a few skilled moves he forms baguette after baguette and puts them in wicker basket type trays, one at a time, allowing them to settle for a bit before they go in the oven. For his biggest market in the nearby Sallanches he usually sells out his entire load of 80 kg bread in less than three hours.
One understands when he says “I am not superman, I need to rest” but still, you can’t quite picture a man like Gérard Berrux chilling on his sofa. Although this might be a moment he secretly craves for, he has too many ideas to see to fruition to afford himself the luxury, say fixing up the barn to raise his own cattle and grow more of his ancient wheat.

Through the big window connecting the bakery with the kitchen of his house, you can see his three-year old, Alexandre Edouard, waving at him. When the little mop of curly hair comes running into the bakery asking for his special edition dinosaur bread, Mr. Berrux cuts more dough for shaping the wings and then puts the soon to be edible prehistoric animal on an extra tray.
“Chamonix is particular,” he explains his motives for settling in the valley with his wife, a dancer and Capoeira teacher from Brazil. “There is not much agriculture so it is relatively easy to make a living from it in terms of competition.” Growing up on his parents’ dairy farm close to Annecy he always dreamt of doing something similar in the mountains.

When Mr. Berrux arrived in Chamonix-Mont-Blanc more than 10 years ago as a seasonal worker, his aim was to make money to travel. For many years he sold cheese and charcuterie in a store, but with a bit of luck and talent for networking and business he found himself opening up a wine bar where he also sold his own home made bread. Back then he had just started experimenting with ancient wheat, which contains less gluten and dates back to the Egyptians. “Last century we used to produce 400 to 500 different types of wheat in France, most of which worked much better with regards to human digestion.”

With the encouragement of the community and the backing of many of the local businesses he then started out as full time farmer-baker-entrepreneur. Trying to go about his business in an efficient manner, the initial plan of the young entrepreneur was to deliver to wholesale and restaurants only. Ironically, this attempt to minimize his hours actually had him work much more than he anticipated.

Thinking about life after work

The long hours pushed Mr. Berrux to consider adopting a healthier work-life balance.
“You know, now I try to work only as much as I have to in order to have some time to go outside, enjoy nature and go mushroom picking with my family,” he says. He has reduced his market hours, holding one a week at his own farm with a few other local producers. Although this kind of work requires your full commitment he feels he has found his true vocation. “It is not easy but so rewarding… and Chamonix with its open minded people is a great place to accomplish that.”

In the back of the bakery, Gérard Berrux shows us the stone mill with two heavy round granite blocks. It is the speed at which the corn is getting crushed, he explains, that makes the quality of the flour. If it happens at a slow speed like here, the corn can warm up which is important to keep the taste. If it happens too fast, it oxidises and loses its taste.
For the coming year, Gérard Berrux wants to start harvesting the old fashioned way with a machine from the 1940s. Although that sounds like an additional work-load, he says: “Next year, I will stop working on Sundays.” The words of an earnest farmer…