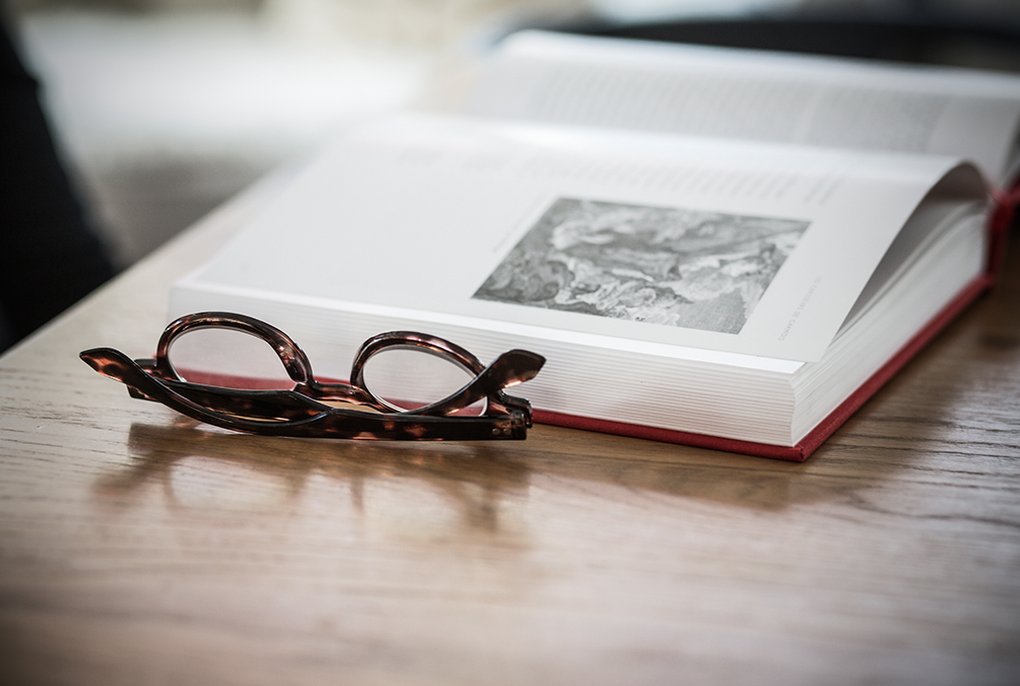 “I’m sorry but the story of the publishing company is my husband’s story, not mine,” says Marie-Christine Guérin as we meet her in Chamonix’s reddest shop, the Boutique Guérin book store. “Michel founded the publishing house. He was the one who came up with the idea of the red books. And everything that can be said about him is in my book,” she adds, referring to the 232 pages she wrote after her husband died of a heart attack in 2007. “I just couldn’t bear his absence, could neither believe nor fathom he was gone. Writing was the only thing I could do. Recalling his story, bringing it back to life took me out of my sadness and gave me reason to laugh again. It’s not a sad book actually,” says the former publisher-in-chief who ran the publishing business after Michel’s passing and before selling it a few years later.

Today, Editions Guérin belongs to publishing group Paulsen, and Marie-Christine Guérin is no longer in charge of the red tomes of Alpine literature as she was in the beginning with her husband. She now looks after the “Démarches” collection of adventure stories in the widest sense, written in first person, and splits her time between Chamonix and Paris.

The place where she would watch school children wearing kippas from the windows of her and Michel’s advertising agency every day. “The caps went outside at regular intervals. (...) They set the rhythm of our days like little pendulum clocks,” she writes in her book “Des violons pour Monsieur Ingres” (Violins for Monsieur Ingres). They spent ten years in their office in the Marais, the popular Jewish quarter, where they worked on ideas and campaigns and presentations for car manufacturers, pharmaceutical companies or law offices. In the end, they would sell their business to the international agency that had taken over their main client. Michel joined the new agency but left after a year. “He had always been his own boss and suddenly found himself in a hierarchic – if very friendly - system,” writes Marie-Christine Guérin in her book. It was not for Michel, and so, in 1994 they decided to leave the advertising world and move to Chamonix.

The place where he made his first steps, where he learned to climb, to love the mountains and live this love. Later, he added another great love: books. “You read all the time. Even when we talk there is always a book or a magazine near you. (...) Reading has always been your space, your breath,” Marie-Christine Guérin describes her husband’s love for literature. Founding a publishing company was only natural – “Michel loved the mountains more than anything and books meant the world to him. These two passions combined resulted in Editions Guérin,” recounts his wife. She didn’t mind leaving the French capital at all. To the contrary, she was very happy to move to Chamonix where everything was so much easier than in Paris, particularly with the children they had adopted in the meantime. And so Chamonix became the home of their family – and the red books.

Why are the books red?

“Red is the colour most people associate with the mountains. Think of the red ropes of climbers, the backpacks and jackets of mountaineers, the curtains in the mountain huts around here. And red also stands for passion, for the strong connection many people have with the mountains,” explains Marie-Christine Guérin. The first book published by Editions Guérin was an illustrated re-edition of “Conquérants de l’inutile” (English title Conquistadors of the Useless), the autobiography of the great French alpinist Lionel Terray, a classic of mountain literature. More than 130 fiction and non-fiction books and coffee-table books were to follow over the next 20 years. Many readers are fascinated by the parallels of these stories to “normal” life, Marie-Christine Guérin says. “They are about finding happiness in nature, about exploring our surroundings and pushing our boundaries. Just what we need to do in our regular lives.”

There was a fair amount of obstacles Marie-Christine Guérin had to overcome after her husband passed away, but she carried on and held on to one of Michel’s passions, the written word. And she is probably right when she says that the story of Editions Guérin is not her but her husband’s story. Yet they probably wouldn’t exist without her either, and so, maybe, it is a story that belongs to both of them. Together.