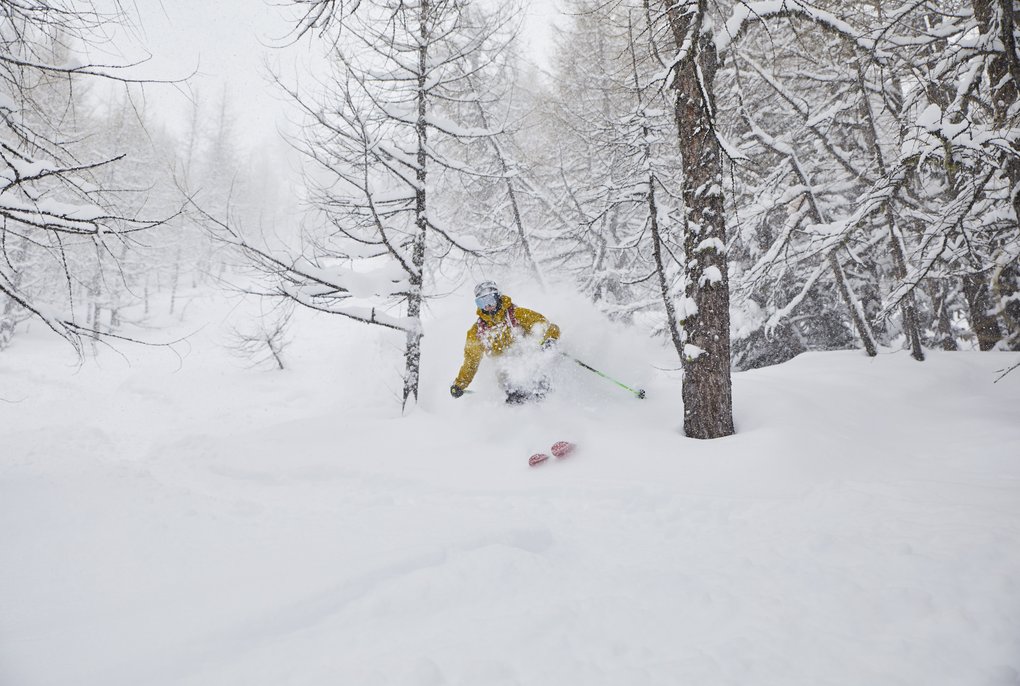 A skier in a bright yellow anorak swooshes through the air, rotates 360°, softly lands in the deep powdery snow and continues his ride downhill. A few minutes later, he elegantly swings to the side of a small chalet by the slope. Above the entrance, big yellow letters announce a "BAR" and next to it, in letters that are a bit smaller, "Chez Croux." The skier takes off his ski glasses and helmet and shakes out his long dreadlocks. The young man's name is Simon Croux; he is 23 years old and one of Italy’s best freeriders. The chalet belongs to his family, and when he isn't skiing, Simon works here.

"I'm a semi-professional skiing freerider and I'm entering this year's Freeride World Tour Qualifiers," Simon explains. As the name suggests, The Freeride World Tour Qualifiers is a competition in which freeriders can qualify for the Freeride World Tour, where the best in the world compete for the win. In the last 2 years, Simon couldn’t take part because of a knee injury and the surgeries he subsequently needed. "For me, it's not that important to qualify for the World Tour. I just enjoy competing now and then and want to have fun doing it," he tells us. To fully understand what brought about this attitude, we need to take a closer look at the relationship Simon has to skiing. At the young age of three, Simon had lots of fun skiing on a pair of plastic skis in his parents' backyard. He soon began pursuing alpine skiing, which ultimately drained all the joy out of the sport for him. "It was boring. The same routine all day, every day, all season." Soon after, he changed to freestyle. Simon jumped over kickers, surfed through halfpipes and spent all his time in ski parks. And lo and behold, skiing felt fun once again. At 17, he finally discovered freeriding, which soon became his greatest passion. Simon quit school and began working at the family chalet. "All I wanted to do was work and ski."

His grandfather, father, mother, aunt and cousin all work at "Chez Croux." The family has been running the bar at the slopes for 26 years now. Soon Simon was faced with a decision: Sports or the family business? One of the two had to take priority. "If you don't have fun doing it, you'll never be good at it," he says. So, he now works at "Chez Croux" six days a week: behind the bar, serving & busing tables, in the kitchen. He prefers to keep to the background, rinsing dishes or preparing food. This may be as physically straining as busing tables all day, but he prefers to have more peace and quiet. "We Italians get quite loud sometimes, which can be kind of exhausting," Simon laughs. As much as he enjoys working at the bar, Simon still spends all week looking forward to his ski day. "Freeriding means freedom to me." This freedom can be quite dangerous at times. Simon has not only experienced this in the form of physical injuries. At the beginning of this year, he lost two friends to the sport. "You have to be aware of the risk – especially since more and more people are around off-piste."

At the heart of freeriding

Courmayeur offers lots of space for freeriders. Together with Chamonix and Verbier, the destination is the heartland of the sport. Freeriding has gained popularity not only here, but all over the world. "The sport is generally receiving a lot more attention" – even if it isn't for everybody: "I can understand why. Five jurors, five criteria and everything is so fast-paced. It is quite hard to follow," Simon reflects. To laypeople the sport often appears dangerous and unpredictable. In fact, however, competitions actually aim for the opposite. Before every run, the exact line is precisely planned, and risks are reduced to a minimum. "Whether it's the Qualifiers or the World Tour – none of the athletes go out on a limb to experiment," he explains. And since Simon brings up the World Tour Qualifiers again, we cannot help but ask him what he would do if he indeed qualified. He laughs out loud and says: "Of course, I'd first have to ask my grandpa if I can have the time off"!