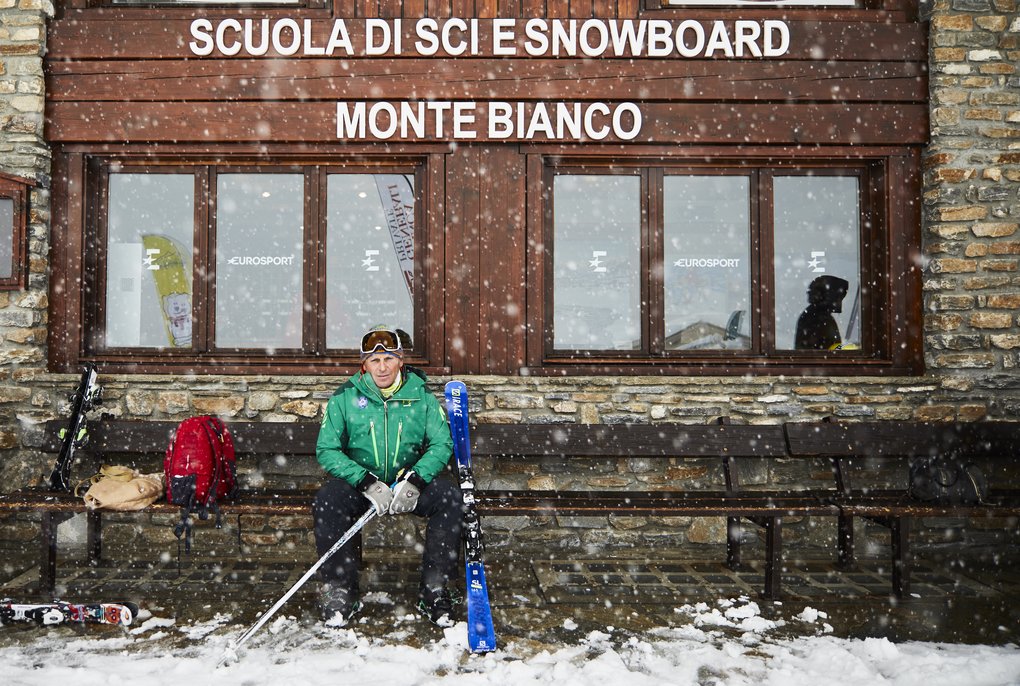 There are only 13 mountains on the Tibetan-Chinese border higher than Shishapangma. Edmond Joyeusaz has had a thing for superlatives all his life. And he had always been the one to do things first. He was, for example, the first to ski down the slopes of the notorious K2 in the Himalayas, the world’s second highest mountain, known as the most difficult of all Eight-thousanders, even harder to conquer than Mount Everest. Of course, Edmond Joyeusaz has climbed the latter as well. In the 1980s, he was the first to fly his tandem paraglider from the highest peak of Grandes Jorasses, the multi-summit mountain in the Mont Blanc massif. In the same decade, he showed a few adventurous pioneers in the Aosta valley how to snowboard. No one was snowboarding in Europe at the time. But Edmond was. Oh, and of course he’s a glider pilot as well.

It does not seem like Edmond Joyeusaz is after the thrill, at least not primarily. He simply likes to explore uncharted territory. “There’s nothing I love more than forging new paths”, he says. To him, projects that others might deem extremely dangerous/borderline crazy are nothing more than calculated risks. It is all about diligent preparation and meticulous planning, he says.

Originally, Edmond Joyeusaz wanted to devote himself to skiing. He made the Italian national team at 25. “I was in the same team as Alberto Tomba. He was the youngest and I was the oldest”, he remembers. Edmond was among the country’s best skiers when a broken ankle ended his racing career much too early. Edmond changed his career path and became a mountain and skiing guide. Here he could be the first in a different way.

Mont Blanc he knows like the back of his hand. Knows its perils, unpredictabilities and generosities. He reads skies and snow like a book and makes forecasts that have become even more precise over the years. He would never take inexperienced mountaineers on a tour or expose them to unsettled weather. As a mountain guide who has conquered tens of thousands of kilometres and difference in altitude, he knows at first glance who is ready for a big tour – and who is not. Many people overestimate their stamina, he says. “A mountain guide’s first commandment? Never start a tour when your client’s not ready.” Edmond Joyeusaz has his rules and his principles, and he adheres to them.

But if it is not about the adrenaline, what is it about? Getting in touch with nature? Much more so. There is hardly a place to feel the power of nature stronger and closer than the mountains. The higher you go, the purer the air. Houses, cars and people are far away. Everything seems more elementary, more intense, makes you feel more alive. It is also for these reasons that Edmond Joyeusaz and his crew take great care to never leave any trash behind at basecamps or on their routes. Because expedition members have been leaving broken tents, empty oxygen bottles, packaging or gas cookers behind, Mount Everest, for example, now has a real waste problem. Between 2008 and 2011 alone, environmentalists have removed more than 13 tons of waste from the mountain.

Edmond Joyeusaz was born in Courmayeur and still lives here today. He has always felt close to nature. And he learned the interplay of tension and relaxation as a young boy: "Before you can ski down, you have to sweat and suffer. That's part of the whole experience." The closer you get to the summit, the more intertwined are joy and suffering, life and death. At Mount Everest, the dead bodies of mountaineers in the death zone shortly before the summit remind us that only a few steps, a few metres of altitude decide between living or dying. "Climbing up and dying at the top is not that difficult," the world-famous mountaineer Reinhold Messner one said, "The most important thing to think of when you reach the summit is how to get down." Edmond Joyeusaz is well aware of this: "I may be old already, but I really want to get even older." So for him, the best moment of a tour is not reaching the summit. It is getting back home safely.