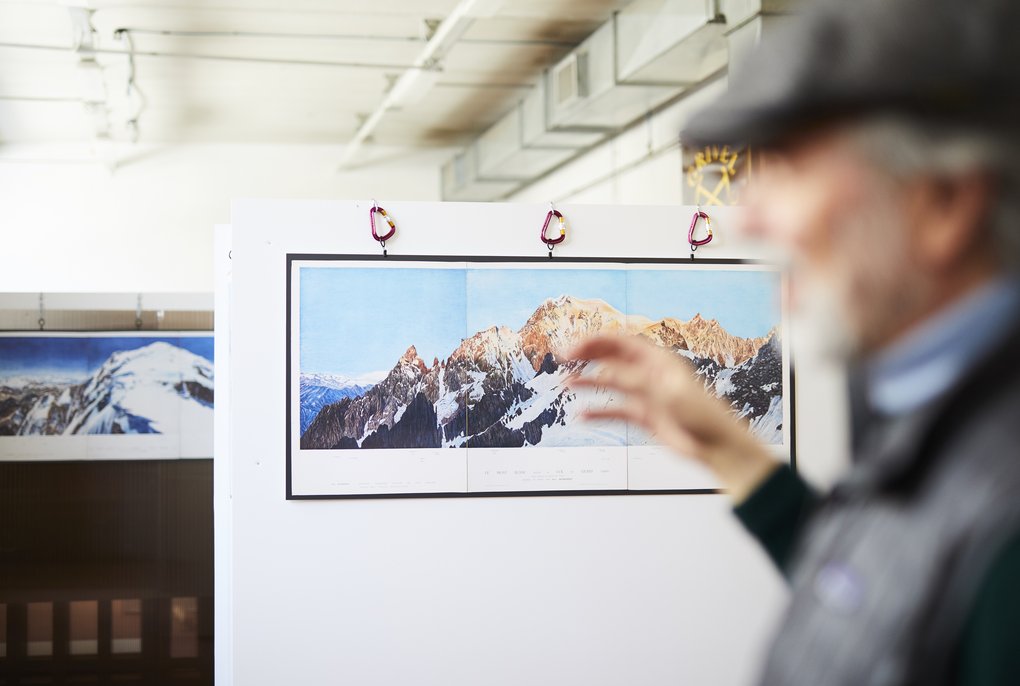 Gioachino Gobbi paces in front of the Grivel headquarters in Courmayeur. Nowadays, the Espace Grivel, which was the company's production site for many years, serves as an administrative building and showroom. The striking building’s glass fronting reflects the surrounding mountainscape. Between a few clouds you can see the Mont Blanc de Courmayeur, the south-eastern ridge of Mont Blanc. This is where Gioachino directs his gaze when I ask him about the beginnings of Grivel. Then he looks me directly in the eyes – with determination beaming in his – and starts speaking about something else, about the history of the mountains. But it soon becomes clear that both things are closely connected, in many ways even completely entwined. Gioachino continues to speak; he is a man who likes to talk. And he is a man who is a joy to listen to.

"The history of Grivel goes back 200 years." The Grivel family – Gioachino's ancestors – were blacksmiths who produced tools for local farmers. When the first international scientists came to the region to explore the mountains, the Grivels crafted the equipment they needed for their expeditions. In 1909, Oscar Eckenstein, a German engineer living in England, was looking for someone to make him a pair of crampons. He was met with great scepticism, but Herny Grivel agreed. And so, 110 years ago, he was the one to make the first modern crampons. Twenty years later, his son Laurent Grivel revolutionized mountaineering with the invention of forward-angled spikes.

“From then on, mountaineers were able to face the wall as the ascended and were no longer forced to move sideways," Gioachino explains. A key advantage which allowed moving forward at a greater speed and thus a decisive factor in the first ascent of the Eiger-Nordwand. The two German mountaineers Anderl Heckmair and Ludwig Vörg passed Austrians Heinrich Harrer and Fritz Kasparek on their ascent in July 1938. In his book The White Spider Harrer wrote: "Just before the rocks separating the second from the third ice-field, I looked back, [...] there were two men running – and I mean running, not climbing – up it." Heckmair and Vörg were wearing crampons with twelve spikes by Grivel. Kasparek was wearing regular ten-spike crampons and Harrer didn't have any at all. In the following decades innovations developed by Grivel contributed to many pioneering achievements in mountaineering, the first ascents of K2 and Mount Everest being just two prominent examples.

A Breath of Fresh Air

After many years of success, Grivel went through a challenging time. In the early 1980s, globalization brought lots of competition and Grivel lost relevance on the international market. That is when Gioachino came on board. “They were looking for someone stupid enough to buy the company. I was the one," he jokes. Together with a few friends he not only raised the desperately needed financial means, he also brought a breath of fresh air to the business. With Gioachino and his determination, new innovations soon followed. In 1986, Grivel created the first ice axe with a curved grip and from then on, business began to pick up again. "The sport and its demands had changed throughout the decades. We had to react to them without giving up our values. I think we've done quite a good job."

There is another thing that you can tell about Gioachino: He deeply cares for values. Responsible innovation with tradition in mind, quality through experience and sustainable production are not just catchphrases, but deeply felt principles that the company lives by. “We at Grivel make our living from nature, therefore we must respect and protect it, " says Gioachino. The production hall in Champagne in the Aosta Valley has 7000 square metres of solar panelling, which provides full energy autonomy for its production. Grivel still produces the majority of its products regionally instead of relying on low-wage manufacturing abroad. This is not only informed by high quality standards and taking responsibility for local communities. There is also a really simple and selfish reason as well: "When I step outside, I want to see my beloved mountains," he says as he once again turns his gaze towards the ridge.