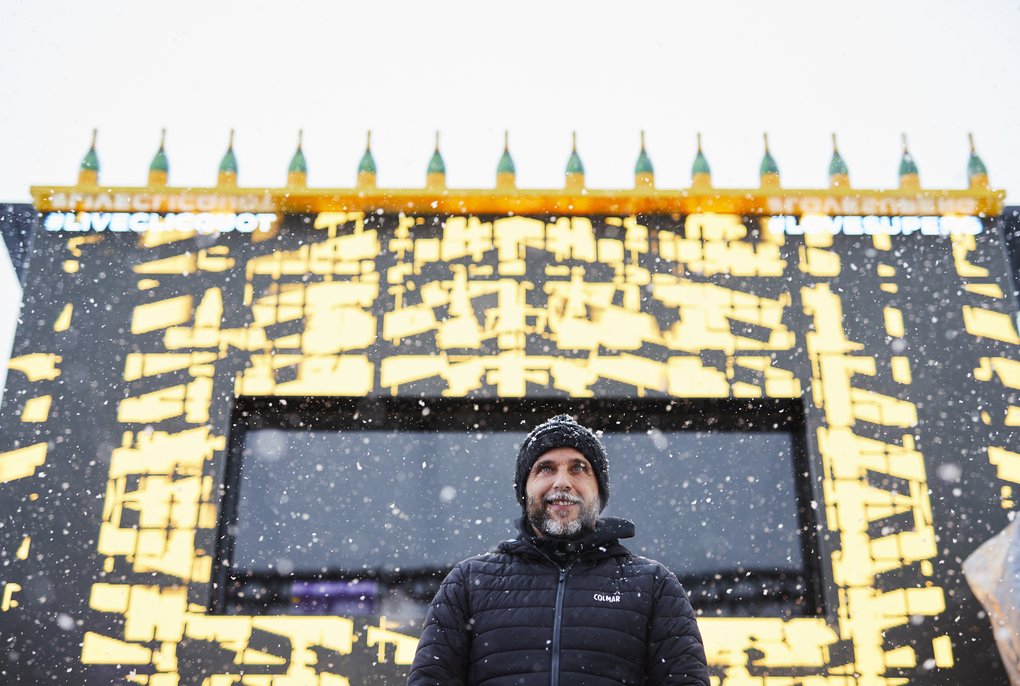 Andrea Baccuini is a mile-a-minute talker, which makes it tempting to describe him as (stereo-) typically Italian. In Andrea's case, however, saying a lot in very little time may have more to do with the fact that he is a very busy guy and that he actually has a lot to say. Particularly about Super G, which he runs with his partner Giacomo Sonzini. Super G is perched on a mountain top overlooking Courmayeur, right by the slopes. It is a restaurant, bar, club, shop and spa, all in one: "For me, Super G is, most of all, a way of life." Andrea had the idea a few years ago when travelling in Canada. He was spending his 40th birthday in a ski resort in British Columbia – with a private cook and waiter and everything else the heart desires – when the resort owner asked him the million-dollar question: "Why are you spending all your money here in Canada if you've got the same things at home in Italy, only better: mountains, great food, excellent wine?!"

"We wanted to change things with Super G"

Andrea didn't have a good answer to the question, but he now had a great idea. All he needed was the right place to make it come true. And he, along with Giacomo, found it in the mountains of Courmayeur. The chalet they found was like all the others commonly found in Alpine regions. And it wasn't in the best shape either. Today, seven years later, it's a completely different picture. The first thing you notice is the large dancefloor and DJ booth. A crowd of people dances to electronic music as the snow softly falls. Inside, several groups of guests enjoy bottles of wine after their lunch while the staff get tables ready for the evening. Dinner on top of the mountain was unthinkable only a few years back: The last lifts and gondolas ran at 3:30 in the afternoon and then the last skiers headed into the valley. They went back to their hotels and got ready for dinner in the village.

"We wanted to change things with Super G," Andrea explains. They paid the lift operators to keep the lifts running longer. Then guests began hanging out on the sun terrace a bit longer and also ended up having dinner at Super G. As a result, other businesses along the slopes expanded their menus and also extended their opening hours into the evening. "In the end, we all profited from the change," Andrea concludes. Nowadays, you can see people take the gondola from the valley up to the top in the late afternoon hours. They don't come to ski, but to have dinner and go out: "They come in regular shoes, not ski boots."

The mountain in a new light

Andrea and Giacomo wanted to change much more than their patrons' dining habits: "In the past, no one wanted young people here. Older people are simpler guests. They eat and drink, pay and go to bed." Super G wanted to be a place for everyone right from the start. "That includes young people who want to have a good time." And people who love the mountains and the snow but aren't into skiing. "In the eighties skiing was a mass sport and then snowboarding came along. Everybody wanted to be on the slopes all day long and power through the day. Today there are a lot of people who have had enough after two or three hours." According to Andrea, people no longer want to exhaust themselves in the snow. They want to ski or board for a bit and then they prefer to move on to something else. "That is why we have to see the mountain in a new light and rethink the chalet," he is convinced. "For every skier there are three people who want to enjoy the Alpine lifestyle, but not on boards."

Super G has a wide range of high-quality offerings for exactly these people. Whether it's enjoying the Michelin star-decorated restaurant, excellent drinks and hip electronic music parties, or relaxing in the spa, or working out in the house gym. Super G also has eight rooms, which allow guests to wake up in the middle of snow-kissed mountains.

Super G is far more than this great place by the slopes. Products from their own shop, a weekly radio show and an annual magazine carry the Super G message into the world. "We want to create a brand that is unique in the Italian Alps and expresses our love for the mountains," Andrea concludes. And so, he and Giacomo are already working on developing other locations in Italy.