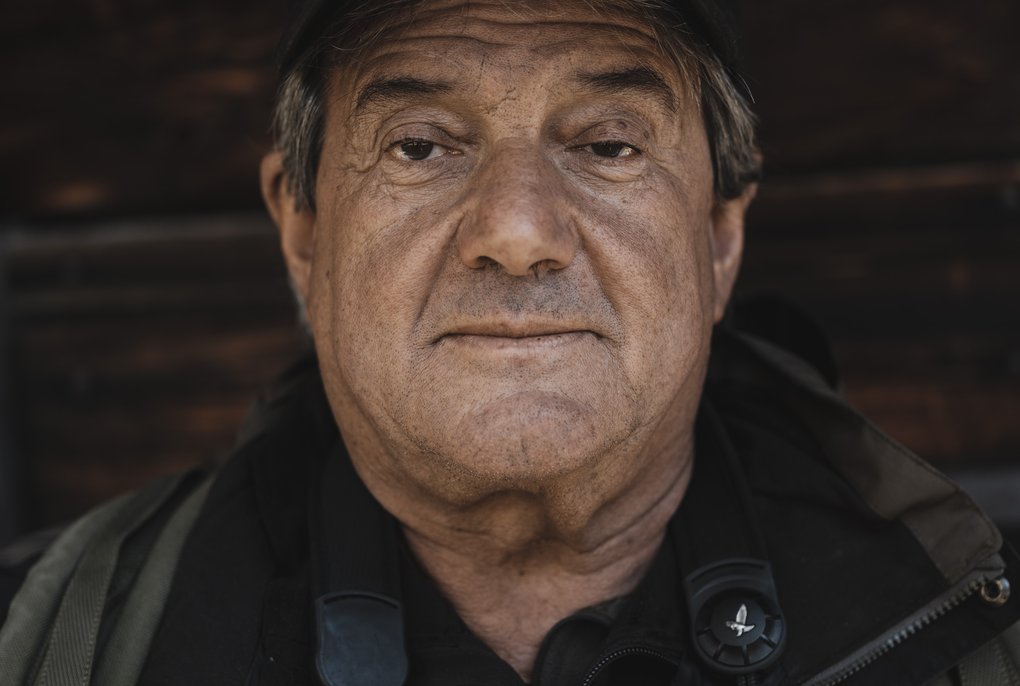 You have to be very careful, "especially early in the morning, when many of them are active," says Maurizio. Trying to be as quiet as possible, we creep through the thicket. We carefully step over fallen branches and round rustling mounds of leaves and stop the moment we hear a sound. We are stalking, not hunting. That is what gamekeepers like Maurizio Fonte do. And as you follow his footsteps, you will see nature through his eyes. The 65-year-old Italian has spent so much time in the forests of Courmayeur that at some point, he has become one with them.

Maurizio is calm and centered, like a centuries-old tree. His friendly gaze and warm smile are those of a gentle soul. His large hands and stocky build say he could move trees. Every now and then his job requires him to be very much hands-on, but most of the time, he walks on quiet soles. "Basically, it's like a game of hide and seek," Maurizio explains. He hides from the animals because he wants to watch them while they hide from Maurizio because they don't want to be seen at any price. But what the animals don’t know is that Maurizio is a master at hiding. He doesn't even need camouflage because those who know the forest "simply disappear in their surroundings". Not even the skittish chamois or shy foxes recognize his presence. And that's a good thing, for Maurizio is not a hunter, he is the one who oversees all hunters. He isn’t in this for the trophies, he’s here for the experiences and the memories. That is why he ventures out into the forest and sometimes up into the mountains, because "only when you really see an animal" you can make a valid statement about their behaviour and state of health. Maurizio knows his stuff: He has been a gamekeeper for over 40 years. Together with two colleagues, he is there to protect the wildlife and nature of Courmayeur.  His workplace covers around 7,000 hectares, stretching from the eastern entrance of the Val Ferret to the western end of the Val Veny. And he has never tired of showing up at the "office" in the morning; after all, he has “the best job in the world".

Maurizio is his own boss. There are no working hours that he has to follow, because "animals don't stick to office hours either". This does not mean that he works whenever he wants but rather that his schedule is based on that of the animal world: "They eat, sleep and move when nature tells them to". This often means that Maurizio is out and about from sunrise to sunset. Sometimes he even stays out well into the night, "because some animals are nocturnal and not diurnal". Especially in the warm summer months, when a lot of tourists are in the valley, "the animals retreat deep into the forest". For Maurizio, that means many night shifts in the undergrowth. This doesn't bother him, but how can you balance such a job with family life or a partner? "You can’t," says Maurizio jokingly, "unless your partner is very understanding.” His wife is. She knew from the very beginning that Maurizio’s career was not about making money. It is about following your inner voice, or shall we say, nature’s calling? Nature spoke to Maurizio at a very early age. "There was an experience in my childhood," he begins to tell in his quiet tenor, and it is as if the forest itself were speaking to you.

One day, when Maurizio was six years old, he strayed from his usual path on his way home from school. Without thinking twice, he suddenly took a turn, off into the forest. "Something drew me there", he said, something he could not escape. So he spent half the day in the undergrowth, and, hiding in a hollow tree trunk, he witnessed something magical: a mother chamois gave birth to her young – an intimate experience that would change his life forever. From then on, he kept diverting from the path, much to the disapproval of his teachers and parents. I had no other choice," he says today, the forest became his classroom, and nature his teacher. "Normal life in civilisation confused me", he explains, but in the shelter of the forest he found clarity. Even later as a teenager, he preferred lonely weekends in nature under the stars to the neon-lit premises of local discos. "I guess some people thought there was something wrong with me," but it was just that Maurizio had found early on what other people search for all their life: fulfilment. You can feel it when you sit across from him, the guardian of the forest, and we can only hope that he will be with the animals of the forest for many years to come. "Why should I retire?" he says, "I would do the same thing either way.” He would still go into the forest, to his workplace, to the employer of his choosing. He’s in on a lifelong contract, grateful and fulfilled.