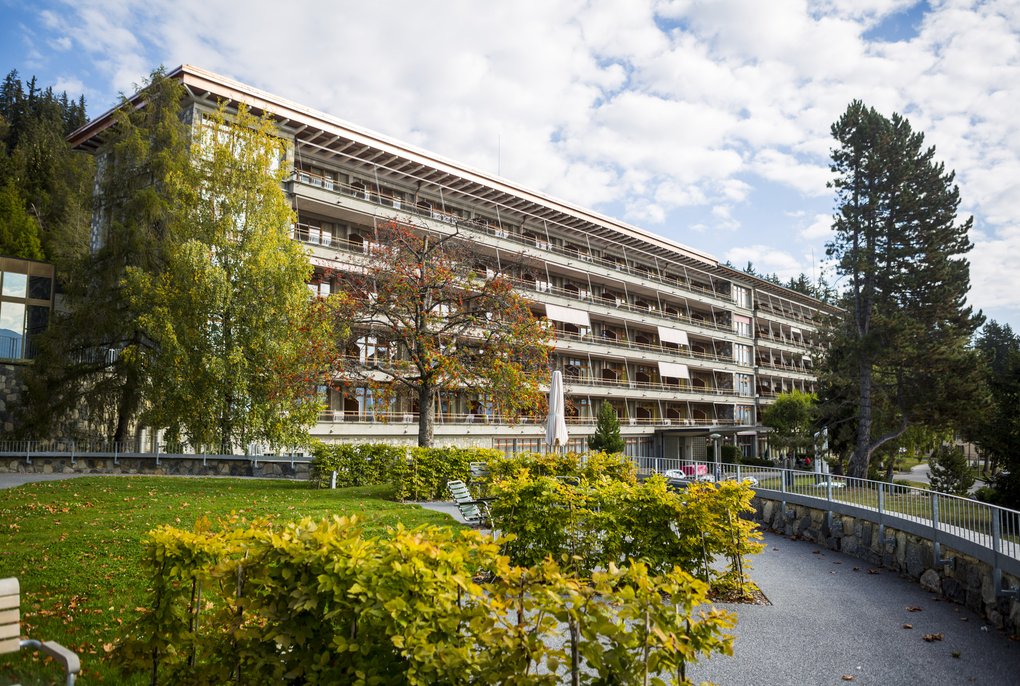 Those staying in the Parkhotel in Crans-Montana today, situated between two glittering mountain lakes, sleep in rooms with a lot of history: Many of them once accommodated people suffering from tuberculosis. 125 years ago they came here to recover in the fresh mountain air. They were all patients of a doctor from Geneva who had discovered the curative potential of the Crans-Montana climate: Dr. Théodore Stephani. Still today, the place owes a lot to him.

"I've been trying to find out exactly why Dr. Stephani came to Crans-Montana for ten years," says historian Sylvie Doriot Galofaro, who specialised in the cultural history of the place. Not that it's any wonder that the doctor chose this spot in French-speaking Switzerland, located at just under 1,500 metres above sea level and surrounded by countless mountains. "What convinced him to stay is the climate. It is very sunny and not particularly humid, providing ideal conditions for lung patients," says the historian. In fact, Crans-Montana is a place with many hours of sunshine. A large scientific study has shown that it is actually 2,300 hours a year. The five small lakes that can be seen from the hill in the hotel park have also played their part in making the place attractive. "And of course the peace and beauty of the mountains also contribute a lot to healing," says Sylvie Doriot Galofaro. Just as much today as back in the day.

But back to the Parkhotel: For a while it went well with the sick guests staying in one part of the hotel and the regular tourists in the other. But tuberculosis, which fortunately no longer exists today, is a highly contagious disease, and those who came on holiday did not want to go home sick. Therefore another solution had to be found. And it was very close by: Where patients with neurological, oncological or internal diseases come to today’s Bern Clinic, Dr. Stephani built the first sanatorium with the resounding name Beauregard in 1899. "The architecture of the building was very progressive already at that time. There were no carpets or curtains so that the microbes could not spread so quickly," says Sylvie. The Swiss sanatorium architecture typical of this period also included elements such as a gallery, veranda and loggia, where the patients could gather strength in the fresh air while enjoying a good view of the mountains.

1,300 photographs from the past

When Sylvie speaks, you can see sparkles in her eyes, and you get an idea of the kind of motivation it takes to look into this subject for years and decades. A quote by Victor Hugo, the great French writer, on the first page of her book "Une histoire culturelle de Crans-Montana (1896 - 2016)", puts it that way: "Remembrance is the invisible present.” Making the past visible certainly is an honourable task. And it is also exciting: The work of a historian often resembles that of a detective who assembles loose puzzle pieces into a coherent image. When Sylvie Doriot Garafalo was provided with 1,300 such puzzle pieces, she had no choice but to work through the subject layer by layer. They were 1,300 photographs of Crans-Montana, taken by Dr. Stephani. On the basis of these pictures she reconstructed the history of the place. And she found that health and tourism are closely intertwined.

Crans-Montana becomes the "Pearl of the Alps”

"Dr. Stephani was not only a doctor, but also an art lover and enthusiastic skier," she says. But he was not too good with money: The sanatorium soon went bankrupt and he sold it to some Englishmen, who turned it into a luxury hotel. What at first sounds like a setback, however, also had a flip side: It was the English who established Crans-Montana as a popular tourist destination. "They brought winter sports and golf here," says the historian. Dr. Stephani welcomed this development, becoming more and more involved in tourism. He took photographs that brought many interesting artists to the small town (and would later end up in Sylvie Doriot Galofaro’s hands). Swiss painter Ferdinand Hodler came here to visit his son, who suffered from tuberculosis, and painted a dozen pictures of the lakes. Or the famous New Zealand writer Katherine Mansfield, who was treated by Dr. Stephani and wrote her "Montana Stories" during her stay. All this contributed to Crans-Montana being given the pretty nickname "Pearl of the Alps" in the 1920s. In the meantime, Dr. Stephani had two more sanatoriums built: the Geneva Clinic and one that would bear his name. Like the Beauregard, however, these also did not last. This was, however, not only his own fault, but also a consequence of the world wars. Nevertheless, Dr. Stephani continued to work as a doctor. "Dr. Stephani really was an incredible person. He never let himself be discouraged," says Sylvie Doriot Galofaro, adding that he reminds him of Doctor Krokowski from Thomas Mann’s great novel, The Magic Mountain. He, too, always had his patients around him. And the story also took place in Switzerland, in Davos to be precise.

Today there are three other clinics in Crans-Montana in addition to the Bern Clinic, which bears this name because it was bought by the Canton of Bern in 1929 after the global economic crisis. Still today, Crans-Montana is a popular health resort. Also because the terrain around town is flat and people who have difficulties walking can be out in the fresh air too. Théodore Stephani laid the foundation for everything that makes Crans-Montana today - both as a doctor and as a person who loved the Alps. And it is Sylvie Doriot Galofaro who made all this is visible again. In the meantime, she says, she has even got in touch with his great-grandchildren. Let's see what else she will bring to light.