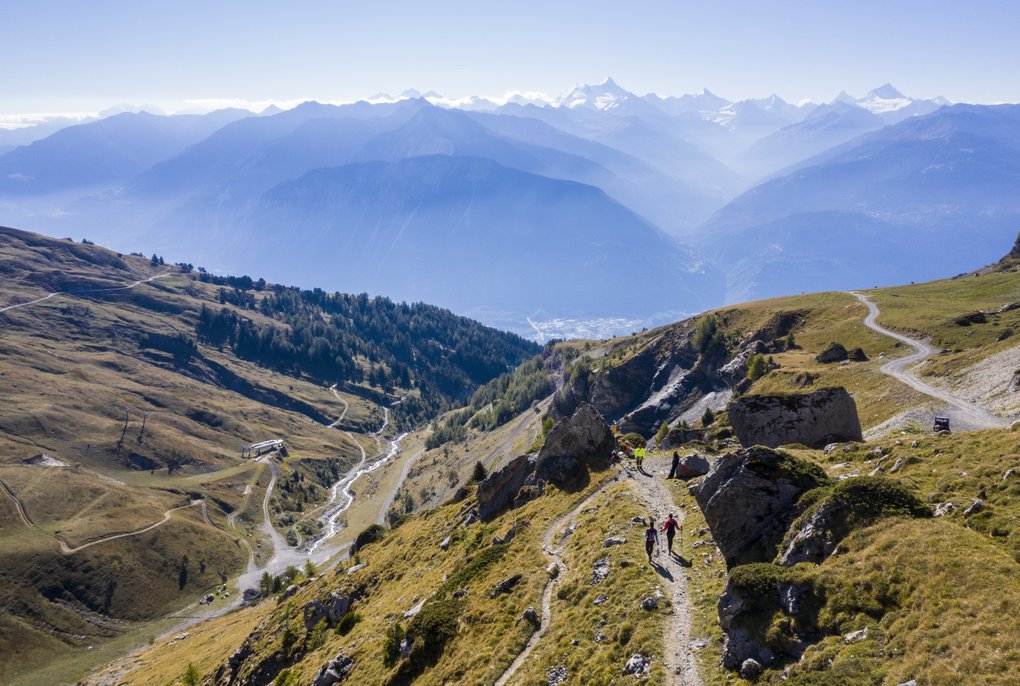 It’s pitch dark as we hear the starting signal for the first runners. It is 5 o‘clock in the morning that last Saturday in September, and they set off to run 55 kilometres through the mountains, leaving over 4,000 metres of altitude behind them. Anouk Beytrison, organiser of the Trail des Patrouilleurs, as the race is called, doesn't show the lack of sleep of the last few days.

Seems like she also got some of the adrenaline that is in the cool morning air around here - even now after the first start, as it has gotten a little more peaceful. The next runners will start at seven o'clock ¬– those who will "only" cover 40 kilometres and 3,000 metres of altitude difference. By then the sun will have risen and the sky will be in its most beautiful blue. Then there will be the smaller laps with 25 and 15 kilometres each, and correspondingly less difference in altitude. "The 25 kilometre run is particularly popular because many couples join in," says Anouk Beytrison. In the other categories, too, you can compete in groups of two or three. "Many find that very likeable. It's more about team spirit than individual performance. And it's not always just about time, time, time." For children there is a mini version of the run in the valley. And in the end everyone gets back together where it all started: On the square in front of the ice rink. And it all turns into a colourful party where the day is celebrated with raclette, cake, beer and a tombola for long after the last runner crossed the finish line.

The Trail des Patrouilleurs has been around for five years. This year, 1,200 running enthusiasts take part, up from 500 when it first took place. It is one of the easier runs in the Alpine region if you compare it with the Chamonix Ultratrail, where an incredible 170 kilometres are run, or the Swissalpine in Davos/St. Moritz with 127 kilometres. Nevertheless, the 55 kilometres are no walk in the park, especially when you consider that it is a steep uphill race. Today, the first of those who run the full distance on this day will reach the finish line after 8 hours, 20 minutes and 47 seconds. That’s just a bit longer than a normal working day, only that it will end already at 1:30 p.m. "People like this kind of hardship. The more sports they do, the more they want to achieve, and soon, five or ten kilometres are no longer enough," Anouck Beytrison explains. Move over, ordinary marathon with 42 kilometres on flat terrain!

Change of scenery: It is shortly before 10 a.m. at the Plaine Morte mountain station, which is located at just under 3,000 metres above sea level. You feel small up here, but there is this stunning 360-degree view of the giants of the Alps, including Matterhorn and Mont Blanc. The wind is cold and sharp, only the sun can make it feel less brutal. One of the many volunteer teams is waiting with snacks and drinks for the first to finish the 25 kilometres. He will be cheered on, photos will be taken. He will seem relaxed, hardly show any signs of the effort it took him to get here. And many more will follow over the next hours. Those who came up with the gondola –  relatives, fans – can only see colourful dots moving slowly through the peaceful alpine landscape, like blood cells flowing in veins. There is no closed-off area, no music, no stress. Running here is almost like meditation. "The landscape is so open and spacious. To run here, with a view of all these mountains, is simply breathtaking," raves Anouck Beytrison, who rarely gets to running herself since she became the race’s organiser.

Preparing and carrying out an event of this dimension requires a lot of manpower. "But there are only two of us on the organising committee," says Anouck Beytrison, who is now working on the trail all year round. Around day X, more than 100 volunteers are helping out. Year after year, it is mostly the same people who help to set up the trail, look after the runners in the mountains, take care of food and drinks and the like. "The team is just great and contributes a lot to the great atmosphere." And why does she put herself through this? "It's just the greatest pleasure to make 1,200 people happy at one stroke," she says. Pretty hard to argue with that.