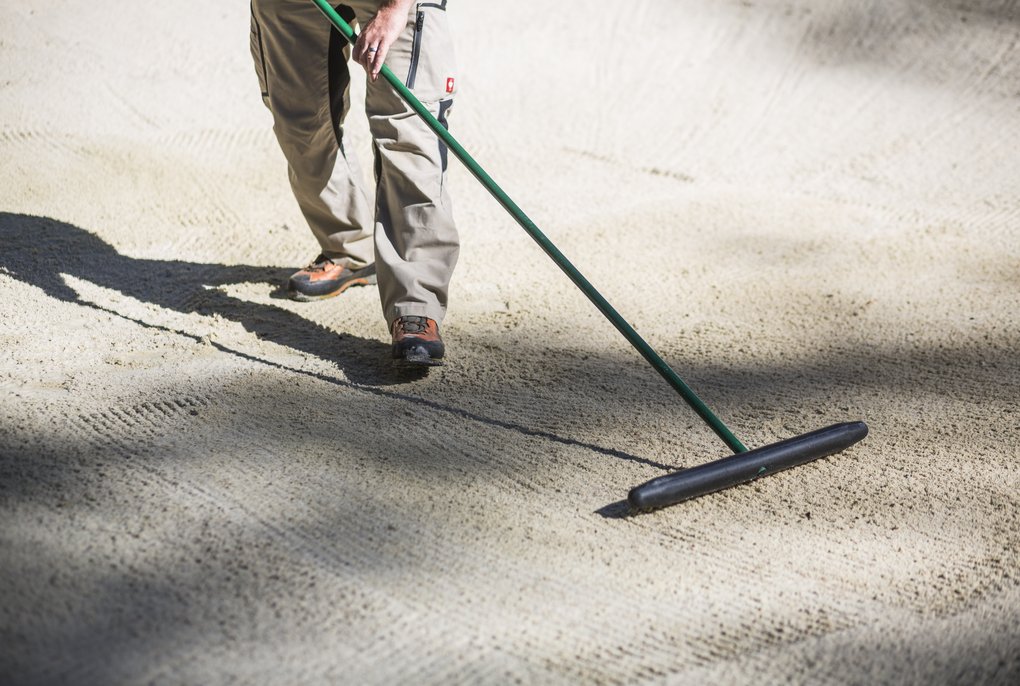 Roland Dumoulin is in touch with nature – quite literally. For 14 years, the greenkeeper has been working on the golf course in Crans-Montana. The 18-hole golf course, named after Severiano Ballesteros, the famous golfer, is situated at 1,500 metres above sea level and surrounded by many, many of the Alps’ highest mountains. Here Roland and his colleagues take care of the beauty of the course. He wears a three-day stubble and a smile – and a tan, obviously. After all, his workplace is almost exclusively outside. And Crans-Montana is one of the Alps’ most sunny destinations.

Cutting the lawn to the millimetre and keeping it healthy and in good condition is just one of the tasks of a greenkeeper. Roland also takes care of the paths and water surfaces, the pruning of the trees and the scarifying - the process in which the lawn surface is loosened up and freed from moss and weeds so that it can breathe better. But a greenkeeper also sets holes and flags, a task that requires special intuition and experience. Therefore it is almost a prerequisite that a greenkeeper plays golf himself. "You have to be able to put yourself in the player's shoes from one moment to the next, no matter whether you are a professional or an amateur. And to know whether a hole is difficult, you have to try it out for yourself," says Roland.

Here, in the mountains, the season is shorter than further down. The official season runs from mid-May to the end of October. Sometimes, when the snow arrives later than usual, the season is extended. There are also other differences between green keeping at higher and lower altitudes. "Here, we have far fewer of the diseases that arise elsewhere due to heat or humidity. The air is fresher and cooler. But since the season is shorter, everything has to go particularly fast at the start of the season."

Modern times on the golf course

The pace is certainly different than it was 10 or 20 years ago. This also has to do with the increased demands and expectations of the players. "In Switzerland the level is very high, people expect perfection. But that's a good thing, it challenges us and makes us better and better. This job never gets boring." The machines have become much more modern over the years, just as the care products contain much less chemicals and you want to be careful to not waste any water. Times change and you have to stay up to date. Especially at professional tournaments like the European Masters, one of the top events here in Crans-Montana. "Everything has to be absolutely perfect before a professional tournament. Every little detail counts. That's why we have a lot more people helping out in those periods," says Roland.

Care, attentiveness and love of nature

This attention to detail is what the trained landscape gardener particularly appreciates about his work. "You not only have to do the work, you have to do it very well and with great care. It's not an easy job, as you might imagine." The closeness to nature that Roland feels is also conducive to his work. "Nature and the weather change constantly and often catch you by surprise. You have to be careful and adapt to nature, work with it and not against it, or it will defend itself".

Here, too, the rule is: If you do your job well, you will get back a lot. The feedback from the golfers is very important to Roland, and unlike in other golf clubs, there is no strict separation between those who work here and those who play. "We all mingle, people talk to each other a lot. Many greenkeepers are club members themselves. And so I often end up playing with the people who usually see me sitting on the lawnmower," says Roland.