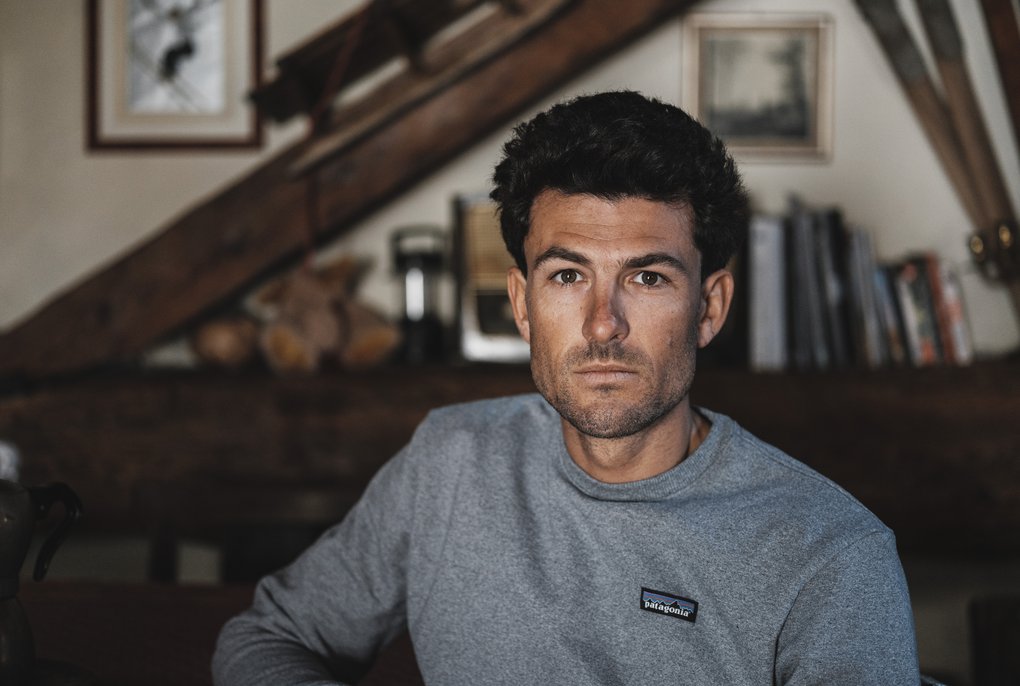 Pietro takes ten steps, then stops for ten seconds. He catches his breath, coughs, gasps for air, then continues. He never pauses for too long, time is running out. But he needs to fill his lungs with fresh oxygen. It hurts. Every breath burns, every cell in his body tells him to stop, to turn around. But that’s no option for Pietro. Not today. There is something that drives him further up. The summit is within reach, he can already see it, just a few more metres. At an altitude of over 8,000 m, however, this still means an almost unmanageable number of small steps – and even more burning in the chest. Pietro keeps going. This is why he's here, this is exactly why he changed his life many years ago, why he completely committed himself to the mountains. For of moments like these, when there is nothing to say yet so much to feel.

Pietro Picco was born in Courmayeur but grew up on the water. Even when the mountains were omnipresent and the ocean far away, all he wanted to do was to sail. "I always believed that we should follow our passion," he says, and so he went on to study Naval Architecture at the University of Southhampton. For four years, Pietro stayed at the English south coast. He sailed to the Isle of Wight countless times and took part in one of the most famous sailing regattas in the world - the "Fastnet Race": 608 nautical miles, several days at sea, no more than three hours of sleep at night. "That was definitely one of the most extreme experiences I've ever had," he remembers. At that time, no one would have thought that Pietro would one day head back to the mountains. Everything revolved around the sea and the wind. After completing his studies, the wind carried him to the southern hemisphere, where he worked in an Italian shipyard in South Africa for a few years. Life followed a clear concept: “The sea and I were here, the mountains and my family there." But when Pietro returned home for a little vacation one day, things took an unexpected turn. His father took him on a simple tour in the Monte Rosa mountains: "At the summit, we witnessed this incredible sunrise. Everything around us was bathed in deep pink.” Sounds like a such a cliché, you say? Well, it was enough to change Pietro's life. From that day on, sailing, job and ocean were far away. But the mountains and young Pietro, they suddenly were very close. So close that, without further ado, he took in his sails, returned home and decided to become a mountain guide.

Of course, that doesn't happen overnight, "training to become a mountain guide took more time than my entire studies": three years of training, three years of preparation. For the entrance examination alone, Pietro had to climb more than 70 summits, many of which he mastered with his friend and mentor Arno Clivel, who also accompanied him on the three-day tour over the Peutérey Ridge - a challenge that only few alpinists take on. With 4,500 metres of altitude, it is considered the longest ridge climb in the Alps, leading directly to the “Roof of Europe”: the summit of Mont Blanc. "This tour made me hungry for more," says Pietro. Despite his adventurous ways, the 33-year-old Italian does not want to be depicted as an adrenaline-driven daredevil. He is very careful and a meticulous planner when it comes to his tours, whether it's the notorious Cerro Torre in Patagonia, a nameless peak on his doorstep, or the Dhaulagiri in Nepal at 8,167 m – Pietro's most recent adventure.

When you prepare for your first eight-thousander, this is how you normally proceed: You climb a few six- or seven-thousanders to see how your body copes with the altitude. Only then you will start to plan your first eight-thousander experience. Unless you're Pietro, who hadn’t been over 5,500 m before he attempted the Dhaulagiri summit. "It was a last-minute decision," he says. Upon invitation, he had to choose between a full schedule at work, renovation work at his family’s home or the Himalayas far, far away. After ten sleepless nights, he finally booked the ticket, "because you never know when you'll get another chance like this". And so he followed his passion once again, "into a completely surreal, but incredibly beautiful world of mountains." The climb was incredibly demanding: Despite going through the acclimatization process, Pietro truly had to fight his way to the summit. Not least because he wanted to climb Dhaulagiri without using supplementary oxygen. "My approach to mountaineering is puristic," he says, meaning he refrains from using any dispensable equipment in order to reach the summit as quickly as possible. On the last 80 metre stretch up to Dhaulagiri summit, however, the slowest of all snails would have beat him to the top, he says: "You take ten steps, stop, take another ten steps, stop again." Until you finally get there. Perhaps it was not only Pietro’s passion that guided him all the way to the top. After all, his surname means this: peak.