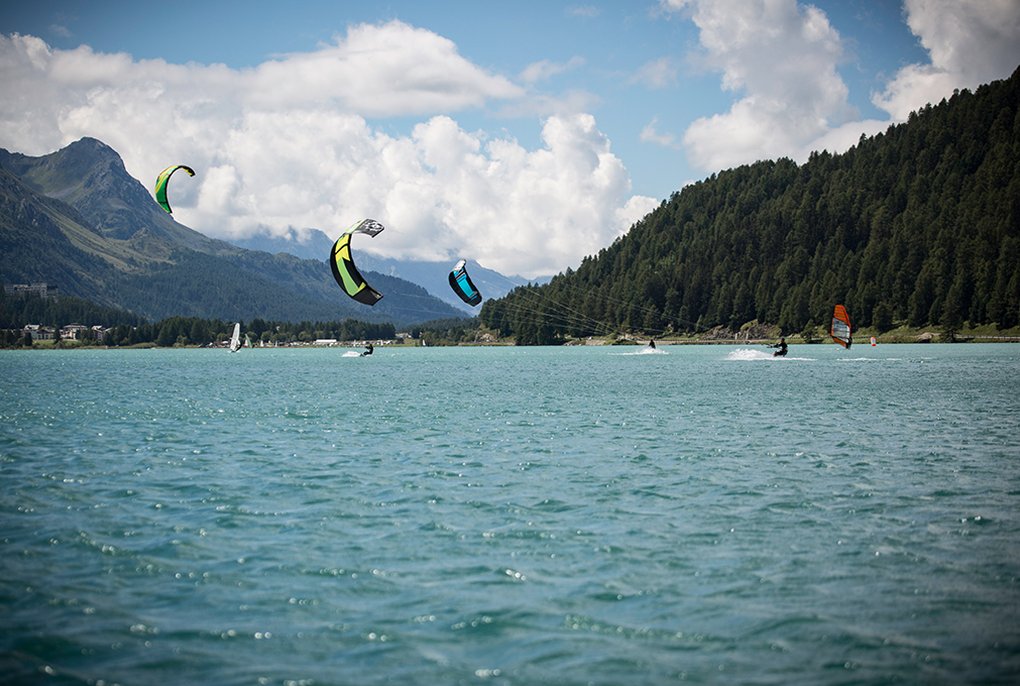 With a critical look on their faces, Youri Zoon and Stefan Popprath are watching the lake. It’s as smooth as glass, although it’s noon and the wind should be here already. But nothing is going on, nothing at all, although Lake Silvaplana is, in fact, famous for the Maloja wind that usually arrives so perfectly on time. Every day around 11am, as the steep hills surrounding the lake start to warm up in the sunshine, he comes as a moderate to fresh breeze – a 4 or 5 on the Beaufort scale. Perfect for kiters and windsurfers. But today, the clouds are hanging grey and heavy over the Piz Corvatch and Piz Julier peaks, towering at almost 3,500 metres on the north and south shore of the lake. But no sign of the wind.

Maybe it’s suffering from a rare case of performance anxiety? After all, Youri Zoon is here – one of the great kiteboarders in the world today. He won the world championship in 2011 and 2012 and is currently number three on the World Kite Tour. With his long hair, cool sunglasses and perfect tan, the Dutchman looks like, well, your typical surfer boy. Today, however, he is in a down jacket. Someone whose list of “workplaces” reads like the index of a travel catalogue (think Australia, Barbados, Greece, Brazil) is not used to temperatures like these. “Yeah, I usually surf in warmer spots than this one,” he laughs, “but who doesn’t love a nice change once in a while? That’s what I love about my job, and even more when it gets me to a place as stunning as this.”

Lake Silvaplana, located south of St. Moritz at 1,800 metres above sea level, is one of the world’s most famous kiteboarding spots – thanks to the Maloja wind mentioned above, the spectacular scenery and, last but not least, Stefan Popprath. 20 years ago, Stefan – baseball cap, hoodie, youthful appearance – founded his kitesailing school at the sports centre Mulets right by the lake in Silvaplana. At the time, the sport was still in its infancy. “There wasn’t even a proper name for it,” remembers Stefan, “first it was called parawing, then we named it kitesailing. That’s why my school still bares that name.”

Stefan, who was born in the Swiss city of Solothurn, came to the Engadin in 1991 to work as an accountant for the Silvaplana spa association. But then he found out about the Maloja wind. “At the time, Reinhold Messner, the Italian mountaineer and adventurer, tried to cross Antarctica on skis being pulled by a kite. I thought to myself: This could be fun and, thanks to our consistent wind, work well for tourists.” No sooner said than done. Already in the winter of 1994, he instructed his first pupils in “snowkiting” on the frozen lake. Moving the whole thing into non-frozen water was the next logical step, he says, “After all, it is all about using the traction of the kite to move forward, preferably at some exciting speed.” Unfortunately, however, there was no suitable equipment, no useful boards, no kites that worked in the water. It took a lot of material testing, tinkering and trying until, at the end of the 1990s, they finally reached the desired breakthrough. In 1999, Stefan opened his kiteboarding school – the first in Switzerland, and one of the first worldwide.

In the meantime, here by the shore of Lake Silvaplana, the clouds have cleared and we can feel a light breeze springing up. The wind may have taken its time, but it is here, at last. And sure enough, the first kites appear over the mountain lake as Youri Zoon slips into his wetsuit. One skilful pull on the kite bar and his kite goes up in the air. Controlling the 10 square metre kite flying about 25 metres above his head with the bar like a stunt kite, he trots to the shore, the wind pulling on his kite with increasing intensity. He slips into the board’s binding and off he goes with the next gust of wind, out onto the dark blue lake.

Countless colourful kites fly above the lake. Everyone watches with excitement as Youri pulls a few stunts from his bag of tricks. A 10 metre jump over 50 metres? No problem for a professional athlete like him. “If you want to kite like that you need a little more than a few days of training,” says Stefan with a grin, who has stayed on the shore with us today. He still likes to kite, he says, but preferably when the sun is out and conditions are perfect. “In the beginning I also participated in competitions. Back in 1999, when I organised the Swiss championship, there were only two of us who managed to even bring the kite out of the water,” he remembers, laughing, “winning was easy in those days.”

Since then, the scene has changed as kiteboarding has become a major trend sport. “20 years ago I knew every face on this shore. Today, there are new faces every day,” says Stefan. Oddly enough, kiteboarding was prohibited for a long time in all Switzerland; until 2015, it was only allowed under special permits issued by local authorities or the canton for certain lakes. Here at Lake Silvaplana, kiteboarding has always been tolerated. “I had already been in the business for two years when the federal government issued a general ban on kiteboarding in 2001, but luckily, the local authorities just let me be.” It might have helped that the water of the lake, springing from the glaciers on the mountains surrounding it, never gets warmer than 15° Celsius even in summer. “So fortunately, the lake isn’t really suited for swimming anyway,” says Stefan.

By now, the colourful kites have grown on everyone around here anyway. “The sport has become a true USP for the region,” says Stefan. Lake Silvaplana is the closest alpine surfing spot for kiters from Munich or Milan, and thanks to the reliable wind, it is a very good spot for beginners, too. It takes three to four days to learn to control the kite and start having fun with it, says Stefan. And even if one day the Maloja wind decided to not show up at all, there’s plenty to do in the mountains surrounding the lake.