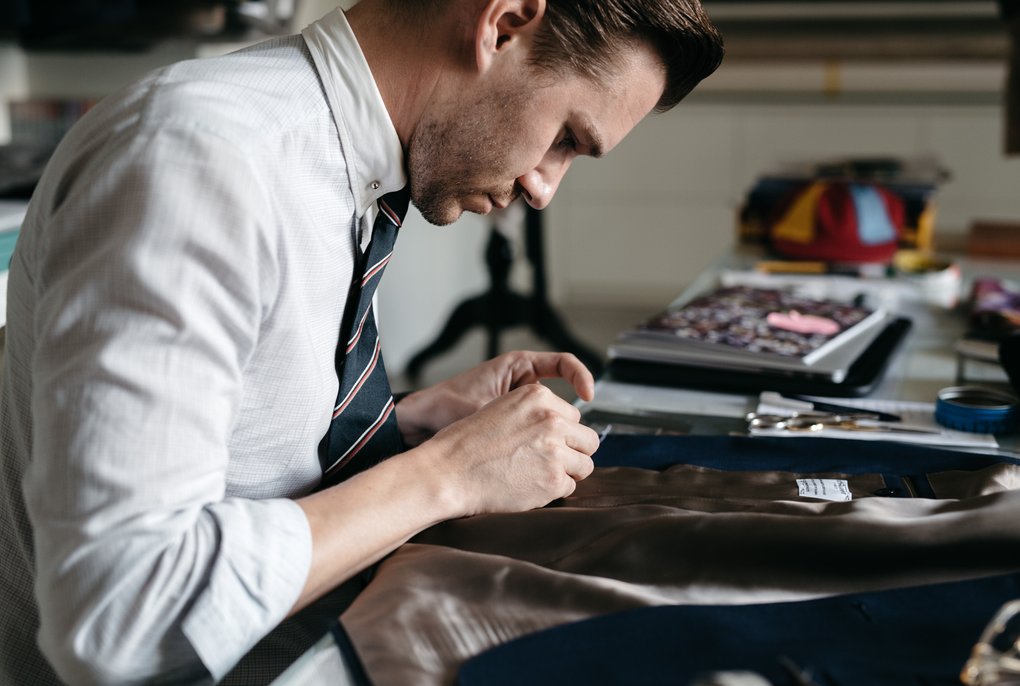 The current cover picture of Silvano Vitalini’s Facebook page shows a male model, dandy-style in tailcoat and bow tie, confidently flipping both his fingers at the camera. “Not your average tailor.” says the line next to it. Conventions are not Silvano’s thing, but sometimes you have to take a second look to realise that: His signature piece is the Engadin blazer, a classic men’s blazer in traditional materials. Only when you enter his studio in the heart of St. Moritz and look through the carefully tailored pieces on the racks you get a sense of the master’s rebellious spirit. There is a blazer made from water-repellent military fabric from Italy, or another one in exquisite silk brocade that is normally used for cushions or drapes. Men’s fashion by Silvano Vitalini does not follow trends, and neither do the creations for his female clients which he makes in cooperation with avant-garde designer Danja Good. “They are rather artsy, we love to be very creative and experimental in our ladies’ fashion,” the young designer explains. There is a “Good & Vitalini” dress in the shop: It is made of wallpaper.

Functional high-tech fabrics, 100% waterproof blazers that “don’t look like they’re waterproof”, blazers made from shirt or tie fabrics – “we really are open to anything,” says the designer. He simply loves experimenting, especially when it comes to materials. “Most of the time you won’t find the fabric you have on your mind. So you either have it made for you or you find another one that inspires you,” says Silvano. Over time, he has built a network of manufacturers who are able to produce the fabrics he wants to work with. He likes local materials - and knowing where his fabrics come from. “That way I know exactly how much they are worth, how much I can justifiably charge my customers. I know that wages in Central Europe are what they are.” A blazer costs about 1,600 Swiss Francs, a cocktail dress is available from 2,500.

Typically, young designers have to make their (unpaid) rounds at established fashion labels before they get to sell their own creations the way Silvano Vitalini does. But Silvano, who has learned the tricks of the trade from his grandmother, was not up for that. After completing the “very application-oriented” fashion design programme in Zurich (“We had to sow everything we designed ourselves”) and a short, fruitless job search, he decided to take the shortcut and, with the support of family and friends, founded his own label.
By chance he found the studio in St. Moritz three years ago and it was for rent. In the beginning, he made “every mistake you can think of,” he says – which seems quite normal for someone who jumped in at the deep end. Establishing a business, finding the right suppliers and manufacturers takes time. Today, he very much appreciates the personal relationships he has with his business partners like the small family enterprise in Valtellina consisting of mother and daughter who make his knitwear. Communicating directly with his clients is also important, he says, because that way he gets immediate feedback on the things they do not like. “And if they like something – what more can you ask for?” asks the designer who himself embodies his style most perfectly at any time.

Silvano Vitalini makes no secret of his love for dandyism. His outfit and styling are immaculate as if he had just finished a photo shoot – as a model, of course. Currently, he commutes between London, Zurich and St. Moritz, but “there is no better place to raise children than St. Moritz,” he says, “and, for myself, my personal hat-trick in autumn is skiing in the morning, swimming in Lej da Staz at noon and a round of golf in the evening.” And when you hear that he worked as a doorman in the town’s legendary Dracula Club for eight years “to earn some money while in college” you can suddenly imagine that this soft brown gleam in his eyes might sometimes turn into something more wild. Something that just so flips its fingers at the world.