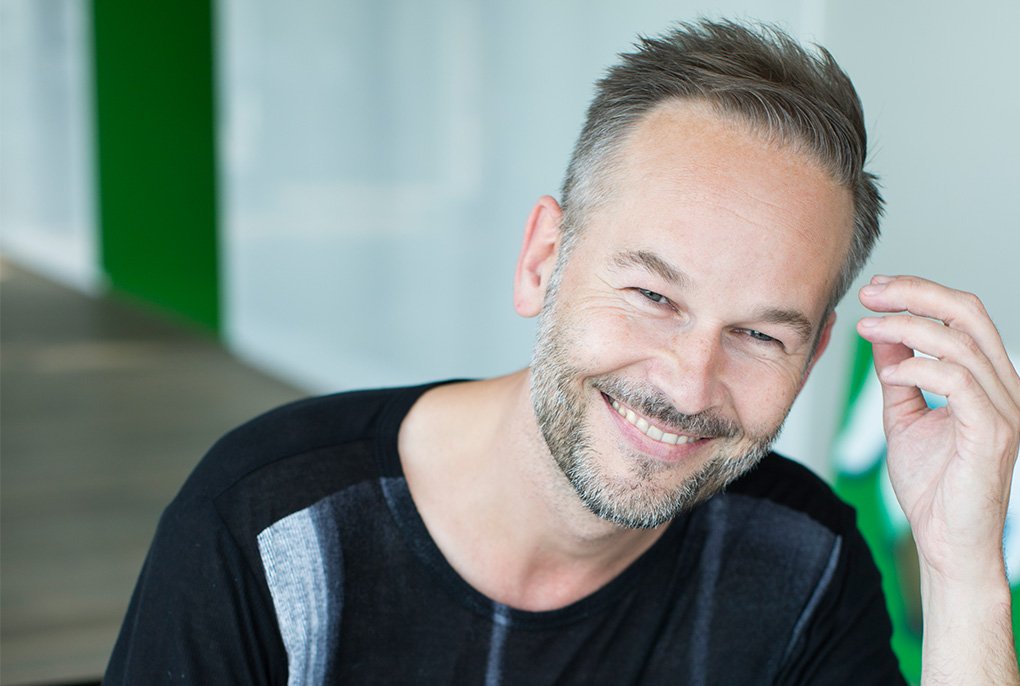 Berlin-based perfumer Geza Schön is a star in the industry. In 2006, he made a name for himself with his escentric molecules – a series of pure, radical fragrances based on one single aroma molecule, the synthetic Iso E Super. Today, fans of his unique, extraordinary scents include celebrities like Kate Moss and Naomi Campbell. Being Geza Schön’s signature products, they are authentic and radical. Authentic because he is committed to being honest in his work, to refrain from all the pretence that is so common in the industry. Radical because there are only few perfumers who dare to leave the big players of the industry behind to develop new, sometimes crazy concepts and formulas. His uncompromising approach has earned him a reputation of being an enfant terrible, a rebel, but that’s something he shrugs off with a charming smile. It’s this way or no way at all for him as an artist, he says, and that he’s not the one to wake up in the morning and plan on how wild and crazy he wants to be.

In 2013, upon invitation by Eveline Fasser Testa, an entrepreneur from St. Moritz, and Ariane Ehrat, CEO of Engadin-St. Moritz tourism, Geza Schön created two room scents representing St. Moritz. Engiadina conjures up memories of an Engadin summer, whereas Inviern smells like winter in the Swiss Alps.
Best of the Alps met with the perfumer to talk about authenticity, the magic of fragrances and the difficulties in communicating scents.

Geza, how did you put St. Moritz in a bottle?

Geza Schön: Well (laughs), it’s not something that can actually be done to perfection. It’s not as if each town or city had its very own, unique olfactory characteristics. So you have to focus and be selective in your approach, and in the case of St. Moritz, we decided to make two scents, one for summer, one for winter.

What was the most challenging part of this endeavour?

Geza Schön: The challenge clearly was to sum up St. Moritz in all its complexity. Let’s not forget, there is no way for me to create a perfect olfactory representation of physical perceptions, say warmth or cold. I can only sketch out these sensory impressions. Inviern is supposed to remind you of the cool winter air in St. Moritz. I based it on Swiss pine wood, a material very common to the region. It looks beautiful and, most importantly in my case, it also smells beautiful. I combined this strong scent with hints of a fresh, chilly breeze, because that’s what you feel in winter: cool, fresh air. And then I added touches of the warm, wooden smell of an open fire. And there you go: a winter fragrance. I am not the one to try and mimic the smell of snow or mountains. To me, that would be absurd, that’s not how I work.

And what can you tell us about Engiadina, the summer scent?

Geza Schön: Engiadina portrays summer in St. Moritz, the lush meadows of flowers and wild herbs. It is much lighter than the winter scent, reminiscent of the wonderful air in summery mountains. There is a lot of green in it, the green of leaves and grass, and also gentian and a touch of spruce. And then there is some Swiss pine wood as well, but much less than in the winter scent. Like wild flowers, Engiadina is very herbal and very flowery at the same time.

Do you play with associations in your creative process or do you try to stick to reality as much as possible?

Geza Schön: Well, this questions gets us right to the heart of the matter. I don’t work with associations. If I did I could just as well just say: I’ll just go crazy from here. But no, I prefer to focus my attention on the real things. When taking a walk in any place, there is always something real you smell. Scents you can put in a bottle. So if someone were to capture the smell of, say, New York City, and then they’d use jasmine and bergamot and musk, all I could say was ‘You bunch of fools!!’ To me, that would be so random and far-fetched. What I want to put in bottles is what I actually smell. I don’t think it should be about associations.

So you want to stay as honest in your work as possible?

Geza Schön: Yes, absolutely. If that wasn’t my intention I could just as well have stayed in commercial perfumery and participate in all the bullshit that is going on with the ever-increasing commercialisation of the industry.

But instead you left it in 2002 to start your own business. Is it a bumpy road you chose?

Geza Schön: Well, that depends on how true you want to stay to your visions, to yourself. I think, the more authenticity, realism and truth there is in someone’s work, the better.

And what inspires you?

Geza Schön: Many different things! It can be some natural product that suddenly becomes available in high quality, making it exciting or exciting again. Or some chemical novelty. Those, however, have become rare these days because every corner of every aroma molecule has already been explored, every odorous substance been filtered and boiled in the lab. I also get inspired by what I smell on the street, like someone wearing a fragrance I like. That could be enough to come up with a new olfactory chord that forms the basis of something completely new. For me, however, the best source of inspiration is travelling. The further the better! I just love watching people, the different lives they live, what they look like, their weather and the wildlife that surrounds them. To be in a different place on your own and smelling all this stuff is just so incredibly inspiring. It makes me want to create a new fragrance for every new place I see.

And how about emotions?

Geza Schön: Oh well. Emotions. We all have them, but it’s very different how we experience them. There are no general olfactory guidelines for conveying my anger to you. It is simply too subjective. It is much more important to understand that everyone of us has their own olfactory socialisation. If I tell you that this or that smells like love to me, you might think, ‘What’s wrong with this guy?!’ Olfactory perceptions are archaic. They are emotional, sometimes even overwhelming. And forget about translating your olfactory message into someone else’s olfactory language. That’s not going to work.This can be frustrating for me at times, realising that my own personal language as a perfumer does not necessarily have to be the olfactory language of others. Also, we are not being trained properly in this regard, and our ability to grasp and understand the world we live in through olfaction is getting worse and worse.

Geza Schön: We can only smell what’s being marketed. When I grew up, there was nothing but Schwarzkopf’s Schauma shampoo. So that’s what shampoo has to smell like for me. In another country, of course, it would be something completely different. In Indonesia, for example, roses are being used when someone is born; in Thailand, on the other hand, roses are being used when someone passed away. So already now you’re fucked and roses are off the table, because obviously, scents are country-coded and you have to know about that or you’re screwed. That’s also the reason why even the big players never managed to come up with a fragrance that does well in every country, although I think that’s actually a good thing. This is one of the reasons why smells and scents are magical to me. Everyone has to find out about their personal perception on their own, it’s not something you can look up on the bloody internet: ‘What does this smell like?’ Only YOU can smell, written words won’t do that for you. Smelling is a highly individual skill.

Is there a motto or a maxim behind your work?

Geza Schön: Well, my motto is to avoid bullshitting. One of my reasons for leaving commercial perfumery was that I was sure that the ideas I had in mind – think escentric molecules - would not be considered viable within the industry. And now, as a self-employed entrepreneur, I have so much more freedom than I could ever have imagined as someone working in commercial perfumery. I chose the right path for me, something that is also reflected in the success of my business. After all, we really sell this stuff. So, obviously, I don’t have to bend over backwards to be successful as a perfumer.

This also brings us back to the beginning of this conversation. I like it when there is something very real for me to work with, as it was the case with the St. Moritz room scents. I don’t want to come up with something super crazy, I like the real, the definite. Perfumers and their marketing people like to hide behind the vague, the arbitrary, it’s like a carte blanche for them. But that’s not how I roll. I really appreciate this profession; there are amazing perfumers and I want our profession to be respected. But I also have to say that there is a lot of bullshit out there. But thinking about it – that’s actually good for people like me. That means less real competition and better chances for our good concepts to stand out. So, in this light, it’s all good (laughs).