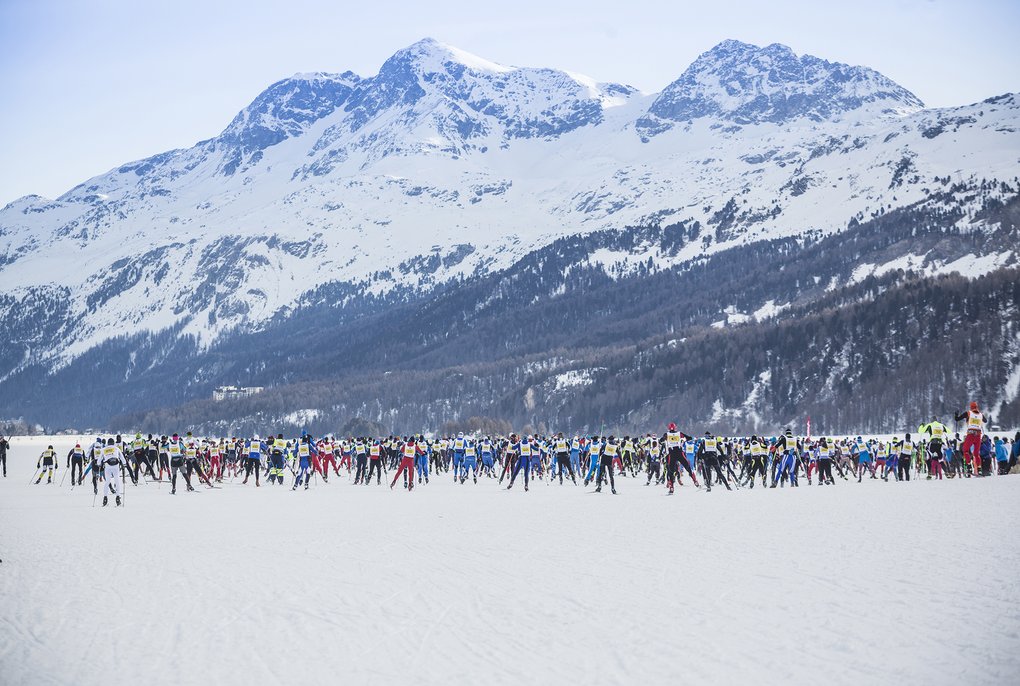 It is 6:45 am in St. Moritz, a time when the village is usually still fast asleep. The mountain peaks of the Corvatsch, Muottas Muragl and Corviglia are glowing red in pre-dawn light, majestically overlooking the Engadin valley. What seems to be just another morning in the Swiss Alps is actually not. Something is different. Be it the early breakfast buffet hours in the local hotels, the enhanced security measures in and around the famous Alpine village, or the crowds of people dressed in tight-fitting sports gear filling the streets at those wee hours of the day. One St. Moritz local explains to another, “The storks are being released again today.” And it soon becomes very clear who he is talking about: masses of cross-country skiers with narrow skis and thin, long ski poles are all heading to Maloja for the start of what is going to be the 49th Engadin Skimarathon.

An event with a long history

Sliding on skis is probably one of the oldest forms of human locomotion. The nomadic peoples of the Far North paved the way for today’s skiing culture. A famous wood engraving from the early 16th century depicts a Laplander with one longer and one shorter ski attached to his feet. Scholars consider this technique as one of the early forms of freestyle skiing. What was originally a means of transportation and gear for hunting on snow-covered ground developed into a popular sport in the course of the 20th century. Samuel Hnateck, a carpenter from Berlin, produced one of the first “slide boards” out of fir wood planks during his stay in the Engadin village of Sils in 1863. Shortly after, Sils-based carpenter Eggenberger produced what he called the first „off-the-shelf skis of the Alpine region“. However, it was still a long way to go until the debut of Switzerland’s biggest cross-country skiing event. In fact, it was the second Sunday in March 1969, when 945 racers participated in what is known as the first Engadin Skimarathon. Back then, nobody could have imagined that the “Engadiner”, as locals call the event, would develop into one of the country’s most important sports events and go-to affairs for the international elite.

Now, at almost 8:00 am, there is a lot of hustle and bustle at the west shore of Lake Sils, close to Maloja. Cross-country skiers and their crews, press, security, kids and families are running back and forth, creating an almost hectic atmosphere. In the starting area the racers are divided into blocks: first come the elite skiers, then the main classes, and finally, the general class. “You feel a bit like a crowd of laying hens,” one skier in the general block says jokingly, and fellow racers next to him start laughing. For the 44-year-old banker from Zurich, the Engadin Skimarathon is an absolute must on his annual calendar of events. He loves the natural movement of cross-country skiing and being so close to nature, which is why he is participating in the 42-kilometre race for the 14th time this year. He, as well as most other general-class racers, has relatively little concern for what place he actually finishes. It is all about the fun and the joy of the sport, and, of course, the fantastic view of the Engadin.

The calm before the storm

8:25 am. There is no wind, not even the slightest breeze. The temperature is just below zero. “Perfect conditions, it doesn’t get any better than this,” says a young Norwegian racer in the elite starting block. Final preparations are being made and it is getting quiet in the starting area of Switzerland’s biggest cross-country skiing competition. Participants are focused and waiting for the start signal. All is calm, except the scarcely audible static sound from the speakers. When the commentators finally cheer on the crowd with a loud “Hey-ha, hey-ha!”, about 14,000 skiers start moving, crossing Lake Sils like a huge trail of ants. At an average speed of 30 km per hour the crowd is moving towards St. Moritz, headed by the international cross-country skiing elite with top-class racers from 60 different countries. A helicopter is capturing every second of this exciting event. The track leads past Sils and Lake Silvaplana, which is especially popular among kite and wind surfers during summer. There, the racers reach the first food and drink station in front of Crap da Sass castle, where a crowd of volunteers and service crews are already waiting. The athletes don’t have much time to relax, they drink and continue without even stopping. They then pass Lake St. Moritz before they go up the forested climb in Stazerwald to Pontresina. The following downhill section, the notorious Stazerwald descent, is one of the key sections of the track. This is where a lot of athletes fall due to the steep trail and high pace. This year’s race is no exception. Half-marathon racers have now reached the finish line and happily throw their hands up in the air.

9:20 am. The track continues on flat terrain from Pontresina to Samedan. The private jets at Europe’s highest aerodrome, Engadin Airport, line the trail of the Engadiner Skimarathon, while the Piz Palü with an elevation of 3,900 metres is majestically sitting in the background. However, the racers don’t have much time to enjoy the view, because the finish line is now within reach and their energy reserves are almost empty. Most skiers have what could be called a mantra, a motto they keep repeating to themselves. It helps to both calm them down and motivate them, as one happy elite participant from the Bernese Highlands would later explain to me in the finish area. Every movement they make has been practised thousands of times and brought to perfection. During the race there is no time to think, everyone is focusing on just one thing: to finally reach the finish line. Spectators keep cheering: “Hey-ha, hey-ha.” The spirit and excitement have reached their peak.

From Samedan the track continues northeast through La Punt. Racers pass medieval Habsburg and French ruins, witnesses of an unforgotten era. There are only a few kilometres left to the finish in S-chanf, and the elite racers are now neck and neck. Spectators cheer and scream, a trychler group rings huge cowbells at the last metres of the race. The excitement builds: Who is going to be first? “In fact, it doesn’t really matter who wins the race, what counts is that everyone makes it to the finish and that the sun is shining for us,” says one crew member of the Swiss team, smiling. And what we see in the finish area shows just that: racers lying on the ground, huffing and puffing, glad they have made it. They gave their all. Completing 42 kilometres at 1,800 m above sea level clearly leaves its marks on a human body. Then there are others, congratulating and hugging each other, looking like they haven’t even been sweating. What they all share is that certain smirk on their faces. Men or women, young or old, recreational athlete or pro – they are all happy they fought through. This is probably also what makes the Engadiner Skimarathon so special: the international cross-country elite skis right next to the general sports enthusiast. By the way, this year’s winner was local hero, multiple Olympic gold medal winner and Switzerland’s first cross-country skiing World Cup champion Dario Cologna. He is a superstar in the world of storks, celebrating his third win at the Engadin Skimarathon this year. And who knows, it might not have been his last one here, in St. Moritz.