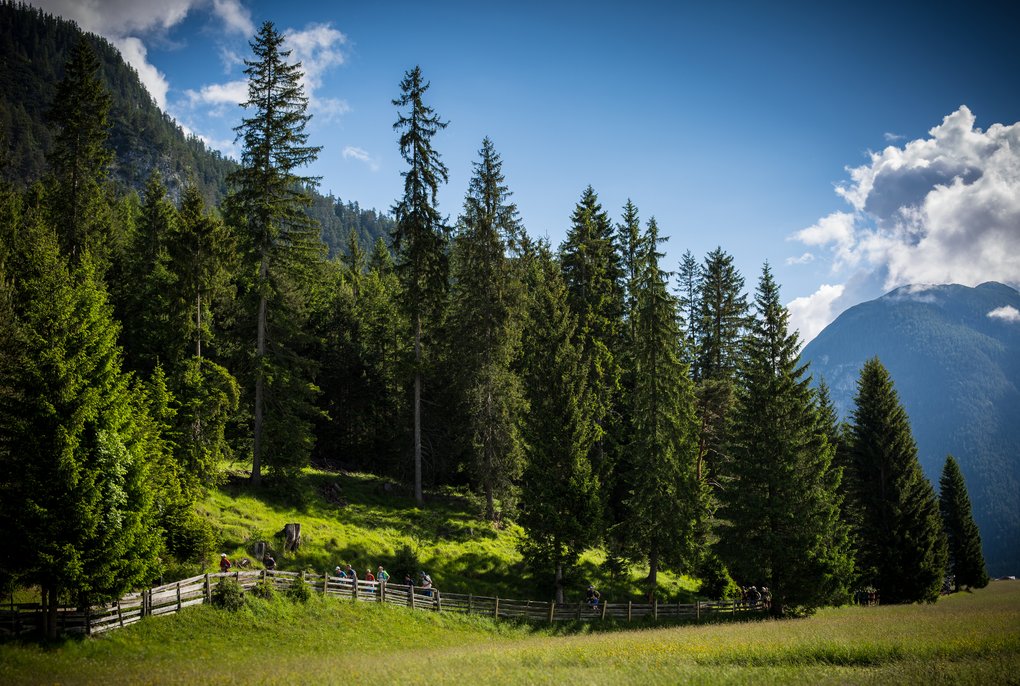 It’s an interesting question: Could Greek philosopher Heraclitus foresee that his sayings would be cited in numerous contexts, thousands of years after his death? And would he have liked this idea? We don’t know. What we do know is: Many of his sayings simply hit the nail on the head. As, for example: “No man ever steps in the same river twice.”

Those who join Wolfgang Pfeiffer for one of his hikes through the woods surrounding Leutasch will quickly notice that Heraclitus’ beautiful metaphor also applies to the forest: You will be a different person leaving it, especially if you take part in one of the meditation hikes organized by Wolfgang, the Buddhism loving yogi and B&B owner. Walking with him means avoiding certain things (like talking and thinking) and becoming fully aware of mostly unconscious actions (like breathing, walking and listening).

It is 8:45 am. We, a group of about ten people, meet in front of the Ganghofer Museum, where two short-legged ponies are indulging in fresh herbs. As we will hear later from herb specialist Johanna Krug, these ponies are called Hänsel and Gretel and the herbs are red clover. Contrary to the forecast the weather looks promising. And contrary to the common idea of a typical hike through the woods, our tour starts with, well, standing. We all close our eyes as Wolfgang instructs us to, and try to focus on our toes, firmly wrapped by hiking or running shoes ready to crack dry branches and tiptoe around puddles. We move our focus like a scanner from our toes up the calves and thighs to our shoulders, where probably many of us feel some sort of tension. A few breaths later, we open our eyes again, inhaling the green of the grass. Then we start walking. Without talking. “Only when we stop to express ourselves, we can start to remember,” Wolfgang Pfeiffer explains, while we are still focusing on what exactly it is our toes do while we are walking.

A few minutes later we stop again. Our next lesson: finding our centre. “The more you reach your centre, the shorter your steps will get,” says Wolfgang. By implication this means: If you hurry, you are leaning forwards and are not in synch with your centre, your inner self. Watching our posture as an indicator for our inner balance could be something to use in our daily lives. But will changing our posture also cause us to be more balanced? It is worth a try.

Third stop: A frame in the forest

We pass a small wooden bridge over rushing water. We dive deeper into the forest and continue to walk on a small trail off the main path to the right. We hear the sound of dry branches cracking under our footsteps and those who don’t pay attention get slapped in the face by thin twigs with light green buds. A few minutes later we reach a huge wooden frame hung up between two trees, presenting a tree in front of a breathtaking scenery. We look at the wooden frame and scene captured by it from various different angles, from very close by to far away on the side. This “picture” of the tree looks different from each position. “Some people don’t like the frame, because they feel it limits their view. Others feel it helps them find their focus,” Wolfgang explains. So it is probably not only a question of perspective, but also of our very own “glasses” through which we see the world: our thoughts, beliefs, faiths that all decide whether we consider a wooden frame in the forest a limitation or a chance to focus.

We continue walking until we reach a square-like opening in the forest with a number of wooden plateaus that almost look like stages for what could be theatre rehearsals. We all step on the platforms, not to start acting, but to get ready for the Qigong movements Wolfgang shows us. The scene looks a bit like an orchestra rehearsal in which the only sound heard is a chorus of breaths, directed by a conductor who does not actually want to be one. “I try to make people understand that everything they need is here, provided by nature. We keep thinking that we have to produce everything ourselves, but in fact, we just have to look around and find that it’s all here,” Wolfgang says.

How much nature really has to offer becomes very clear at our next stop. We have reached a large glade in the middle of the forest that looks like an enchanted garden from another time and age, with rolled-up ferns and thorny bushes. Several tree stumps invite us to sit down like on stools in an open-air cinema. In the leading role: The Hohe Munde. We sit, breathe and watch the clouds go by, covering and uncovering the mountain top at 2662 metres above sea level. “Even if you can’t see the top, it is still there,” says Wolfgang, and what he really means are the goals we have been and will be setting for ourselves. We can not always see them clearly, sometimes we even lose sight of them, and some of them are yet to be found. But they are there. And working our way towards them is not only the means to the end but actually part of the actual goals. Every step of the way can be fun and rewarding, if it is taken with awareness.

Awareness is the word of the hour. “More and more people try to focus on their inner self. Yoga, meditation and experiencing nature become increasingly popular. And the beautiful thing about it is that these experiences are sustainable. The energy we receive doesn’t go away,” Wolfgang says. And he has a helpful mental picture for those who think they are unable to meditate: Imagine you are sitting in a cinema, watching a film without sound. Let the pictures pass by, watch them, silently, and whenever the sound comes back on, just turn it off.