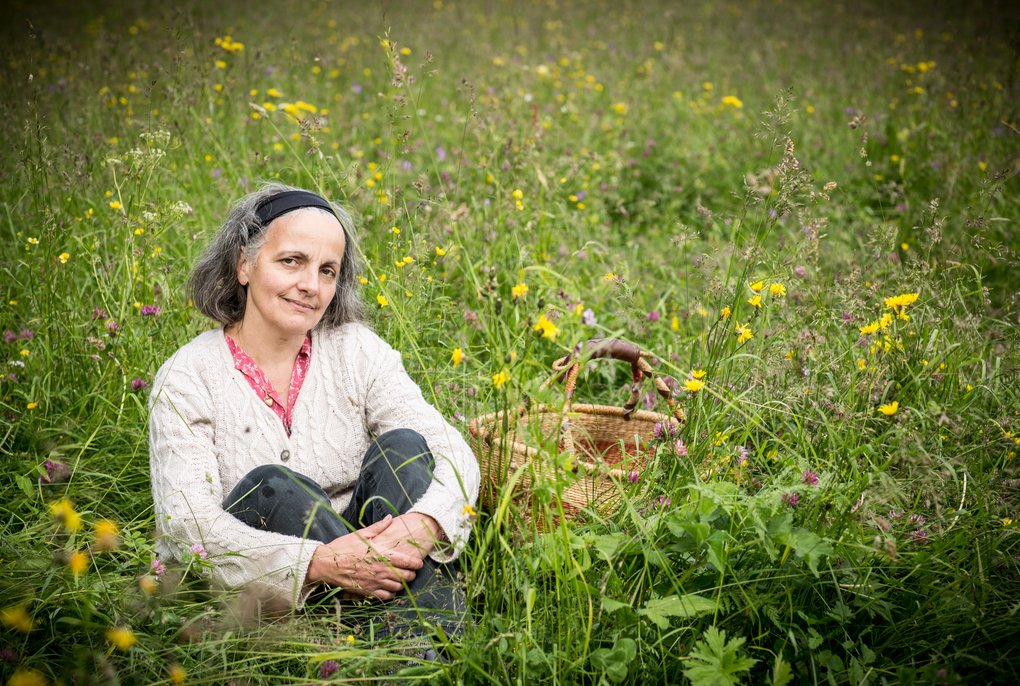 "Don't even try growing a herb garden here, nothing will grow," Johanna Krug was told when she moved to Leutasch for love in the early eighties – and stayed. "These words sparked my ambition," she remembers. And so she began experimenting with all sorts of herbs and greens, read books on the subject and took classes. In the end, she even completed her training as an herbalist. Today no garden in the area is as thriving, luscious and fragrant as hers. And there is surely no other person in the area who can talk about local herbs more enthusiastically than Johanna. Just join her on a blooming meadow and listen to what she has to say.

Her garden, located in front of the Ganghofer-Museum  in Leutasch, hosts a colourful plethora of flowers, plants and herbs. Some of them have calming properties (like St. John's-wort or lady's mantle), others strengthen bones (like comfrey) and some are said to relieve pain (like meadowsweet). The latter belongs to the species of spirae, which serves as a base for modern aspirin. Johanna knows all there is to know about herbs. She knows their origins, their species, their properties and the myths and stories that surround them. Like the one about girls who used to sew lovage into the seams of their skirts to attract suitors. Or how wormwood (also known as mugwort) was used as incense in courtrooms to create an atmosphere of justice. And who wouldn't want a cure for stupidity?! Johanna likes to quote the patron saint of herbalists, Hildegard von Bingen: "Whoever is stupid or simple-minded should crush betony weeds to a pulp, apply it to the chest and wrap it up with cloth overnight. Repeat often and sense will soon return."

When Johanna talks about herbs, she does it with lots of joy and confidence. You can feel the intensity and passion that has gone into her learning process. With dexterous fingers she plucks flowers from stems, pulls thin roots that look like fragile nerve endings out of the earth and extracts nectar from red clover blossoms. These are said to be good for women in menopause because they contain oestrogen – the female hormone that decreases from a certain age which can lead to a number of ailments. Just like music that gives you goosebumps is more than just a series of sounds, a meadow is more than a patch of green for Johanna. It is more than a place where you can have a picnic and pick a few daisies for fun. Speaking of daisies, Johanna explains: "Common daisies are also known as 'arnica for the uterus'. They are used, for example, to help cows after a difficult birth." Johanna creates special teas, tinctures, creams, spice mixes and herb-filled pillows for a good night's sleep.

If you mindlessly walk by the museum's garden, you are missing a true treasure trove. A guided tour with herbalist expert Johanna Krug quickly reveals how powerful and precious nature is, how much it has to offer. All you have to do is engage in the subject and have the desire to learn. Sometimes a closer look is all it takes. The doctrine of signatures says that an herb's shape or colour says something about its remedial property. "The leaves of the liverwort have three lobes, just like the liver. And the spotted pattern of the lungwort looks a bit like lung alveoli," Johanna teaches us.

"There is no such thing as a weed. Every herb has its use."

The woman with seemingly endless knowledge of plants firmly believes that every herb is useful. Weeds do not exist for her – she believes this misconception is a result of an aversion to anything that grows wildly, that seems uncontrollable and threatens the idea of a perfectly controlled and manicured garden. "I always say: 'Don't be annoyed by it, eat it!" What she means are plants like goutweed that can grow uncontrollably but taste good when their young leaves are prepared as a salad.  "Older goutweed leaves can be used like parsley: chop them up and freeze them. They go very well with spinach dumplings or creamed herb soup," Johanna suggests. By the way, goutweed not only tastes good, it is also said to help with gout. It is officially described as a food supplement because labelling it a medicinal remedy is not permitted. "Herbs may only be sold as food, not as therapeutic products." However, the herbalist is convinced that healthy eating and the targeted use of herbs can prevent disease. "What is allowed to grow and ripen freely in nature has 400 times more active substances than salad from the supermarket, where no one knows how long it has been lying around."

Just like daisies or wild goutweed, Johanna also appreciates the often-shunned stinging nettle. "Stinging nettle has many minerals and micronutrients and its seeds are a natural Viagra for men and women. It has a nutty flavour and tastes really good on a piece of bread with butter," she shares. And she has a little trick on how not to be stung by the leaves: "The stinging hairs all grow in one direction. If you stroke them the wrong way, they break off and sting. If you stroke them in the direction they grow, they won't sting. It's like with cats: They don't like being stroked the wrong way either!"

The wisdom of herbs

Listening to Johanna speak of herbs quickly reveals that they are more than a field of research for her. She hints that there may even be more to them than their healing properties; perhaps even some form of intelligence or intention: "I believe that herbs that have been deemed weeds try to draw attention to themselves by growing so wildly. As if they were saying: 'Hey! Don't forget about me! Maybe I can help you!'" Her respect and fondness for the gifts of nature are tangible. Whether they are popular and beloved herbs like rosemary, oregano and chamomile, or underdogs like stinging nettle, goutweed and goldenrod, which defies pollution by growing even at the side of highways, colouring fields with its bright yellow. "Herbs are a subject without limits. Open one door and ten will follow," she concludes without seeming flummoxed by the abundance.  Quite the opposite: There is a sparkle of curiosity in her eyes that automatically draws in all those listening to her and learning from her knowledge and passion.